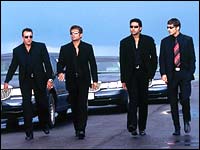 Dus is a film riding high on self-confidence.

Anubhav Sinha, the director, has thrown together a big budget and an edgy background score � take a bow, Ranjit Barot � with a high-flying ensemble cast, sure his film will work.

Abhishek Bachchan [Images] shows off panache gathered over the last two years, a look of ease that only comes with success. Sanjay Dutt [Images] has always had the John Wayne swagger. And Shilpa, Shilpa, Shilpa � Lord, this lady kicks a** just so superbly.

The film begins with the ultra-stylised Hey Now, Hey Now track, a catchy, music video introduction to the cast of the film. Abhishek preens self-indulgently, playing the camera with unbelievable gusto. Even as the others show up, making their calculatedly cool screen appearances, the stalls whistle the loudest for the small B. This man has arrived, and, as his assuredly wicked grin proves, he knows it.

Then come a fleet of Bentleys, and we see the men � Sanjay, Suniel Shetty [Images], Zayed Khan [Images] and Abhishek � walk out, all in immaculate black suits, shades wrapped tightly around eyes. Reservoir Dus? But wasn't that Kaante? Fear not, this isn't. These dudes aren't bank-robbers, they're cops, albeit in designer -- sartorial, not spy-foiling -- gear.

Which is now a Bollywood standard: even the most mediocre film looks slick. But Dus is different, more John Woo than Ramu's Factory, made with an eye to be nothing but cool. The script is secondary, the logic is redundant, and realism is anything but that. Dus is about nothing but attitude, and, to be fair, the film has quite a bit of that.

The lads and lass are part of the Indian government's anti-terrorist cell, an outfit that functions in a peculiarly dark office building, and seems to be operational only between three and four in the morning. They start by going on a bomb defusing mission, and we soon realise the group dynamics � Dutt leads the squad, younger brother Abhishek is the Most Valuable Policeman, and Zayed Khan is the slightly geeky explosives expert. And Shilpa Shetty [Images], well, she is Lara Croft. 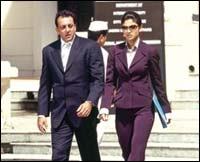 The plot of the film is dashed simple � or is it? A terrorist no one really knows, has planned something big in Canada [Images], in 10 days. What, it isn't known. All they have is a name � Jaamwal � and a few clues from assorted secret agents from faraway lands � Sanjay Dutt mouths the word 'Bulgarian' a couple of times in an attempt to get some secret-agent cred. Finally, the gang lands up in Canada, which is the assumed locale for the big finale.

Like it's Hollywood counterparts � all those inane blockbusters starring Jean Claude Van Damne, or anything with Ben Affleck [Images] wielding a gun � Dus is unassumingly bereft of realism. In Dus, Delhi [Images] has a visible coastline at the AIIMS flyover, Hummers bounce in the air when shot at, and the home minister's office resembles a particularly radical advertising agency. All is wild, and all is for effect.

For the first half of the film, this effect is well achieved. Popcorn is munched contentedly as the action simmers along, double-quick. There are points where the script slags, but the film's pace doesn't really dip. The film is insubstantial yet streamlined. There is drama, minus detailing: Zayed tries his hand at a bomb with great heroics, but the explosive's timer doesn't really tick lethally away, staying conveniently stagnant. Still, the masala's there, and packaged well.

But it falters. The buildup crackles nicely, yet the culmination is clumsy. The climaxes are weak, and the film increasingly comes unspooled in the second half. The ensemble cast is great for the pre-dhamaka preparation and the post-boom glare-filled conversation, not to mention the midstream laughs � it's just that the bangs they're aiming for, the high action moments peter out into tame whimpers.

The acting is good, for the most part, except the script lets it down near the end. The film races snappily along to a predictable plot, but the audience laps it up because it looks so 'cool.' Abhishek Bachchan, as mentioned, is cooler than ice, and has moments in the film where he just freezes you with his remarkable attitude.

And to thaw you, there's Shilpa. Increasingly hotter with each film, Shilpa Shetty is probably the sexiest woman in the Indian film industry. In this film, she does an Angelina Jolie [Images] to supreme effect, making you wonder how the anti-terrorist cell can function with even the slightest efficiency if she's strolling around within ogling range. She does a pretty fabulous (almost) martial arts kick, and comes off with great poise. Of course, one does spend a lot of time forgetting the script and plotholes, staring dreamily at the bat-tattoo peeking through from just above her tailbone. Guess it's only fitting that a film of this name deserves this perfect 10.

Sanjay Dutt is a wee bit too old for the swagger, and totally comes undone at the film's climax. Suniel Shetty could have totally been cut out of the film. Raima Sen [Images] plays his wife, an unimaginably irritating character, the perfect muse for homicide. There's an annoying amount of filler, like a redundant love angle between Abhishek and an inexplicable Esha Deol [Images].

Needless to say, Pankaj Kapoor lives up to his incredibly stellar reputation, and steals every scene he's in, seemingly without even trying.

Dhoom didn't dilute it's nothing-but-cool attitude with melodramatic sentiment. The masala was unadulterated. This is where Dus loses the plot. The film is meant to be ludicrous, visual, well packaged nothing. Adding typically overdone Bollywood emotion to it just doesn't work. The film's climax is a total letdown, though it must be mentioned that the director has optimistically left sequel-room. Gyarah, anyone?

This is full-on time-pass, sure. A racy actioner free of common sense, full of frilly thrills. And, as Mumbai parlance has it, 'total paisa vasool'.

It could have been (collegian accent) 'awesome', but ends up being awe-somewhat.