The Sathyabama Deemed University felicitated Kamal Haasan [Images] with an honourary doctorate on January 17. Several Tamil film industry figures were present at the function but the person who stood closest to the actor when he collected the doctorate was his guru K Balachander.

"Gone are the days when I taught him to act, now I want to him to teach me to direct," Balachander said.

"To hear Balachander sir say that was like getting another doctorate. He was being affectionate just like a father. But as a son, I must say that he was the person who sculpted the actor in me," an emotional Haasan replied in his speech.

All the speakers showered praise on the actor. VN Rajasekharan Pillai, vice chancellor, University Grants Commission, said, "The doctorate given to Haasan will serve as a benchmark in the discipline of arts."

Jeppiar, the chancellor of the deemed university announced that the institution would start an MGR Study Centre and a Sivaji Study Centre.

Haasan was the legitimate heir to Sivaji Ganesan [Images], said Vijayakanth, president, Nadigar Sangam. Ganesan's son Prabhu said the throne once occupied by his father now belonged to his brother Kamal. Prabhu also read out a note from Rajnikant that said Rajni was proud to be Kamal's friend. Rajnikant was shooting for Chandramukhi in Hyderabad.

Jassie Gift took the Malayalam film music scene by storm with the song Lajjavathiye, composed and sung for Jayaraj's 4 The People. The Tamil version of the album also topped the charts for several weeks though it did not become as big a rage as it was in Kerala [Images].

But Gift's unusual voice attracted Harris Jayaraj and he invited Gift to sing for him in Shankar's film Anniyan.

It took 10 days for Shankar to picturise the song with Vikram and some well known models in Mumbai.

Perhaps after this prestigious offer, the music composer in Gift may decide to rest a while. In all probability, he would be singing in more Tamil films now. 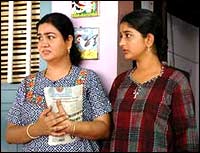 Urvasi and Meera Jasmine [Images] as mother and daughter

After a long gap to take care of her daughter, Urvasi -- who acted memorably opposite actors like Mohanlal, is making a comeback to Malayalam films.

Urvasi plays the mother of Meera Jasmine in Satyan Anthikad's Achuvinte Amma. Although Urvasi had to leave her daughter in Chennai and go to Kerala for shooting, she could not say no to an offer from Anthikad.

Sunil, who played a police officer in last year's biggest hit, 4 The People, will play the male lead for the first time.

Srinivasan and Mohanlal together

Characters created by Srinivasan and enacted by the writer and Mohanlal together still evoke nostalgia among many Keralites. Srinivasan, who was suffering from a writer's block, has come out with another hilarious story, Udayananu Tharam. Typical of Srinivasan, the protagonist is a struggler; this time a film director. The writer has a knack of spotting black humour in tragic situations, and making people laugh at his characters while empathising with them.

Vikram in the Tamil remake of Kaazhcha

If reports are to be believed, Vikram will play star in the Tamil adaptation of the hit Malayalam film Kaazhcha. Blessy will direct the Tamil version.