The audience is the greatest teacher," said director Vikam Bhatt in a recent interview with rediff.com. And it seems like he's learnt his lesson. Indeed, Jurm might prove to be redemption for Bhatt whose last outing at the box-office, Elaan --Mithun Chakraborty's comeback film, sunk without a trace.

For someone who hasn't seen a hit in the last three years, this would be a coming back to life. For Jurm too, it's resurrection in more ways than one.

And so we begin with the arrest of industrialist Avinash Malhotra (Bobby Deol [Images]), believed to have murdered his wife Sanjana [Images] (Lara Dutta [Images]) in a fit of drunken jealousy. Sanjana's body is missing from the homicide scene, their farmhouse. Avinash, who can't remember his crime of passion, pleads innocence.

To his rescue come best buddy and his company's legal advisor, Rohit Saxena (Milind Soman [Images]) and Sonia (Gul Panag), an old friend and secret admirer of Avinash. But fingerprints on the murder weapon and a last minute eyewitness (Shakti Kapoor in a special appearance) do him in. He is sentenced to a life behind bars.

Convinced of his innocence, Avinash is determined to get to the bottom of things and settle scores with his wife's killer. So he breaks out of jail with Rohit's assistance, after he's entrusted the running of his company affairs to the lawyer. But things take a turn when his ride to freedom turns into a one way-ticket to the grave, with Rohit pulling the trigger of a gun aimed straight at him.

That's when we break for intermission. Which means it's just the beginning of the roller coaster ride of double-crossing, double jeopardy and devious deceit.

Deception is the name of the game. Bhatt plays by his rules but doesn't disappoint. The thriller picks up pace in the latter half, where the story moves to Malaysia. More action and suspense ensue. We won't let the cat out of this bag, but as endings go, revenge could not be sweeter in afterlife. 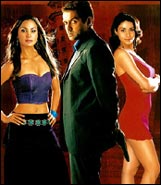 Bobby Deol, Bhatt's schoolmate, does his alma mater proud with his controlled performance. There's a sense of maturity about his candour, which is good news. Lara Dutta has a meaty role; she sizzles in the songs on the first half, goes a bit over the top toward the end but overall turns in a commendable performance.

So then, edge-of-the-seat stuff this? Bhatt's no Hitchcock, but the tale is gripping enough. The script is tight, with most ends tied up. Though the fake blood, glycerin and the film's 'studio' feel jar, the overall production is slick.

And worthy enough for a weekend watch.