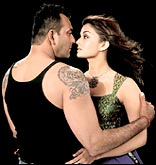 Picture a man on a keyboard. In a crazy rush to convey his emotions, he types far faster than his capacity. In the process, he misses a few words and spells them wrong. Those sentences can be understood, but the expression will still be considered flawed.

This is precisely what happens with Shabd. Though the alphabet is in place, the structure fails to respect the importance of vowels, and thus lacks fluency.

Debutante director Leena Yadav chooses to write and direct a daring and unconventional subject for her first film, faintly reminiscent of Lars von Trier's Breaking The Waves and Ron Howard's A Beautiful Mind.

Sanjay Dutt [Images] plays Booker Prize-winning author Shaukat Vashisht. He writes in English and thinks in Hindi. And when he thinks, rather plots, a story -- a matrix of Hindi and English alphabets float through the screen. To him words are what numbers are for John Nash in A Beautiful Mind.

His room is cluttered with paper cuttings, distorted pictures and collages, which is probably to symbolise his messy state of mind. Why messy? Evidently, Shaukat lost his touch after winning the Booker, and his second novel, appropriately titled And The Time Stood Still, was a blooper. The critics dubbed it 'unreal.' Now, it has been two years since he has penned anything.

Egotistic, obsessive, paranoid, and self-centered, Shaukat is desperate to write something real. He resolves to borrow from life. First, he tries to draw inspiration from his chattering maid (Sadiya Siddiqui). It doesn't help. So he starts building up a character in his head named Tamanna. To breathe life into his Tamanna, he manipulates his beautiful wife and fashion teacher, Antara (Aishwarya Rai) to encourage her friendship with a lively photography tutor, Yash (Zayed Khan [Images]).

The manner in which Shaukat maneuvers Antara to 'let go' of her emotions towards Yash is too simple. One never really understands why Antara is okay with risking her marriage, or what is going on in her mind. You are torn between her being either a submissive wife with no qualms about being treated like a puppet, or an adventurous woman who doesn't mind a casual fling with a younger guy who adores her.

Once the story -- Shaukat's, not the film's -- gets its tempo, the moody writer realises the possibility of Antara actually falling in love with Yash. At first, he cries, and then decides to let reality charter its own course.

By now, the film turns into a zombie. The viewer, struggling to figure out the 'Why is he acting like this?' and 'Wait a minute! What is happening here?', has to come up with his own interpretation. There is no visible subtext. Too many questions are left unanswered.

On paper, the idea of a frustrated husband seeking a story in his wife's uneventful life by prodding her to get closer to a younger colleague sounds more than fascinating. On screen, however, the transition of this concept is vague and confusing.

Agreed, subtlety is an art. But leaving the viewer to his own devices for guessing mindgames till the very end is like creating a crossword without clues.

Shaukat's internal conflicts are poorly established. For a literary author, the story he is intent on writing is somehow too cheesy. Ditto with Antara and Yash. They become friendly on the basis of some corny Sardar jokes. It's not funny at all.

The interaction between Shaukat and Antara is interestingly done; they share a lot of sexual chemistry and undercurrents of tension.

Shabd's strongest virtue is Sanjay Dutt. His Shaukat is complicated and controlling in nature. But Dutt lends expression to every complexity and fires up the screen with a superlative performance. He can be Godlike, arrogant, vulnerable, calculating. He rocks!

The actor makes a great pair with Aishwarya Rai [Images]. Rai looks beautiful, thanks to Aseem Bajaj's striking photography. She is a writer's muse after all. But enigma doesn't completely work for Antara. Her character comes out as someone incapable of thinking for herself and/or unconditionally/foolishly in love.

Zayed Khan is too cute for the intense, albeit flawed, aura of Shabd. He is like strawberry-flavoured bubble gum mistakenly put in a box of liqeuor chocolates.

Shabd is a good debut for a first timer. The subject holds, the narrative challenges. The only problem is that it doesn't give answers. You have to create your own story. But then everyone's not Shaukat, right?