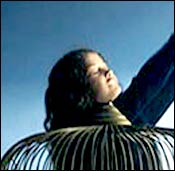 Did I sound stupid?' Ayesha Kapur asks at the end of the interview. The 10 year old has just made her acting debut in Sanjay Leela Bhansali's [Images] film, Black, starring Amitabh Bachchan and Rani Mukerji [Images].

She seems to very confident for her age and tells Entertainment Correspondent Patcy N more about herself.

I was born on September 13, 1994. I live in Auroville Pitchalikullam, near Pondicherry. I study in Transition school, in Std 4.

A German photographer Andreas had clicked some pictures of my brother and me, as he does calendars for my grandmother every year. A lady called Nikki thought the pictures were attractive and should be sent to a model agency. She forwarded them to some agencies and Sanjay Leela Bhansali picked them up.

He liked the pictures and I got a call. For a while, they did not want me because they thought my nose was strange. It did not look like Rani's nose. But Sanjay wanted me and I was on again.

I was very nervous on the first day of the shoot. I had to do a few scenes with Amitabh Bachchan [Images].

The name of my character is Michelle. I play a blind, deaf and mute girl. I learn to say a few words because Amitabh teaches me and I learn sign language.

I have not had any acting training. During the shoot, I was taught the way blind people move. A gentleman called Randhir Kapoor and some others taught me how to roll my eyes, how to touch walls while walking, how to walk in a strange way and how to make some weird noises.

Sanjay helped me a lot with my scenes. He would call me 'honey, bunny, funny.' He helped me whenever I did not understand or if I got nervous. I enjoyed working with him.

Amitabh was very nice and kind. I read in the newspapers that Amitabh praised me a lot. I really liked that and I hope it is true. Amitabh was very patient with me whenever I forgot my lines or expressions. He would leave me alone so that I would learn them again and then get it right. Whenever my shot was not good, I would get upset and would want to do it again. I wanted to be perfect.

I did not meet Rani but I saw her once or twice. She is beautiful. I don't think I look like her when she was a child. We look different.

I have seen just a few scenes of Black. All of us acted well but Amitabh was the best. I also liked my screen mother, Shernaz Patel.

Even after acting with Amitabh, I feel very ordinary when I go to school. My friends don't ask me anything about the movie. I have learnt sign language and have taught my school friend, Issah. Now, we communicate with each other in this language!

My parents are proud of me though my father (Dilip Kapoor, who owns the HiDesign chain of leather stores) initially did not want me to act. He thought it may affect my education. I agree with him though I like acting.

I want to be an actress when I get older. But I will complete my education first because when I am over with acting, I still would want to have a good job. My mother supports me.

I watch English movies. My favourite actress is Julia Roberts [Images]. I don't know the Hindi language well. I don't see Hindi movies. I haven't watched any Amitabh Bachchan movies. But now, he is my favourite actor.