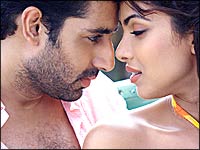 Okay, so what's up with Nana Patekar [Images]?

Arguably a great actor, the man has often been criticised -- with some justification -- of doing the same thing, of playing tough as nails characters with precision, but each almost indiscernible from the other.

Now, after a riveting turn in Apaharan, the actor kicks off his shoes and steals the show with effortless ease in Rohan Sippy's Bluffmaster [Images].

The whole film tosses up twists in terms of cast. It is the unusual suspects who work the best in the movie. Riteish Deshmukh [Images] infuses spontaneity and crackle to the otherwise sluggish plot, and Priyanka Chopra is perfectly credible. The infallible Boman Irani doesn't have much room to free his comedic arms, but his chuckle-provoking abilities are right in place.

But it's the man in the middle who springs the surprise, the man in the glare of all the promotional spotlight, the man who makes you believe this isn't an ensemble film at all, the man who's done a Will Smith-esque rap and danced to a remixed Mehmood classic, the man who really wants to get a hit on his own steam. This is an Abhishek Bachchan film, but his character is too thanda to get the job done -- and the movie going -- solo.

Roy (Abhishek) is a conman, an unflappable master of disguise well versed at sussing out the ideal targets, the fish to bait. He is a perfect player, understated and inconspicuous, and scarcely puts a foot wrong. Which is what makes him ho-hum, a venerable Rahul Dravid [Images] of conmen, mechanically efficient but a decidedly inglorious vision to behold.

Therefore, when his lady love (the one truth in his web of deception), Simmi (Priyanka) walks out on his life of crime, we really don't care.

Then enter Dittu, and we're suddenly hooked. Riteish plays a younger con-artiste, a con-boy if we may, bubbling with enthusiasm and licking his lips in perpetual greed. A sharp and much-needed comedic track hops into the script, and the irrepressible Dittu takes over almost entirely, playing the bumbling prot�g� to Roy's straight-guy routine. Armed with neat and witty lines, Riteish is impressively natural.

Roy and Dittu set out to play the biggest fish (lots of undersea metaphors in the film, by the way) in the pond, Chandru (Nana Patekar). A man who fleeced Dittu's dad into insanity, Chandru is a masterstroke, a villain of outlandishly coloured shirts and a penchant for 'dialogues' -- with an appreciation for the same. He hears a good line, and notes it down for future use. The character is hilarious, sleazy, and impressively narcissistic, taking self-worship to a literal new plane. Brilliant.

Of course, pulling the wool over Chandru's eyes isn't simple. Roy has troubles of his own, which include wooing back Simmi and accepting the fact that a brain tumour has left him with three months to live. Add to this a watered down yet valiantly Guy Ritchie-esque supporting cast that fits neatly into the chaos and the machinations, and we're left with a pretty fun comedy.

What sets Bluffmaster apart, though, is cheek. The film's comic roots don't stray into slapstick, but crackle along by occasionally marvellous dialogue, and a brightly self-referential tone to the proceedings. Like Ocean's Twelve, it is clear that the filmmaker and his men are having a ball, and that translates to the proceedings on screen. It's a timepass blast, with some lines actually good enough to become quotable, something that is tragically rare in Hindi cinema today.

The film's music is great, with most songs playing in reduced length, and the father-tributes work, especially when we see Abhishek Bachchan [Images] in a chase sequence with his dad's Do Aur Do Paanch classic Tune abhi dekha nahin grooving in the background, and Rohan places a pivotal scene in Mumbai's Maratha Mandir -- which is playing the re-released version of his dad's Shaan. 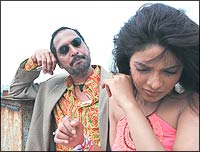 There's a lot of Bluffmaster that leaves you cold, but it's harmless, and the lines around it make up for it. The cons and heists in the film are refreshingly original, and the film ends up a nicely made Matchstick Men, just feel-good style.

Wait for the twists, and try not to predict ahead -- this is not a serious caper film at all. The good thing is that it isn't trying to be.

Eminently watchable, but maybe it's time Abhishek Bachchan finds his shirt-buttons. And shaves.