The film, obviously about a wife's murder, initially had two endings. The first was called Jaan Bujhke, where Anil Kapoor's character kills his wife on purpose. The other was called Galti Se, where Kapoor kills his wife by mistake.

The Telugu version of the film sparked off a controversy, and Ram Gopal Varma decided to do away with the two Hindi versions.

Now, on the eve of the release of My Wife's Murder, RGV talks to Subhash K Jha about the film. 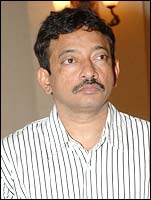 Do you think there would be protests against the film's theme of killing one's spouse?

The Telugu version did spark off protests. But the difference between the Telugu and Hindi versions is that in the former, the husband purposely planned his wife's death. The tagline -- Ever Wished Your Wife Was Dead? -- got the moralists uptight.   The Hindi version is different. Here, the husband accidently kills the wife.

You had earlier planned to release two versions of the same story.

Galti Se and Jaan Bujhke were like two sides of a coin. I thought two endings for the same story was an idea that had never been done before. But finally, we abandoned it. The idea of making this film is to show the traumatic emotional journey the husband goes through after he kills his wife.

It looks like yet another film from your Factory.

Don't be so hasty in dismissing it just because I haven't directed My Wife's Murder. It's as worthy of enormous eyeballs as Sarkar. It's the first production where the story idea is mine.

Did you ever get murderous thoughts about your wife?

When I conceived the story, I wasn't married. So the idea was original. Forget about killing one's wife, one wishes many times that one weren't married at all. It's to do with being nagged, incessantly told what to and what not to do. No one likes that.

When I first met him to narrate the story, he immediately wanted to produce it. We plan to produce more films together. 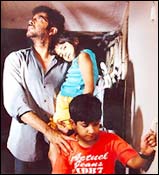 My Wife's Murder is being pitched against Suneel Darshan's Barsaat.

I know nothing about Barsaat. I don't think two or even three films affect the box office. But I like to see women getting drenched in the rain. So to that extent, I like Barsaat. But if the women in the rain are accompanied by a family drama then, sorry, that isn't my scene.

Does My Wife's Murder have women in the rain?

It isn't that kind of a film. It's got a different feel and flavour. It's a film that goes beyond sex and the bed -- straight into the head.

Why did you cast Suchitra Krishnamurthy and Nandana Sen in the film?

Because they looked like the characters to me. I met Suchitra through her husband Shekhar Kapur [Images] who's a close friend of mine. She had a strong personality. I remember she had called me after Daud and said it was a horrible film. That's when I decided I'd one day take revenge on her by casting her in one of my films.

Nandana Sen was my director Jijy Philip's choice. I think he saw her in a commercial.

Where does Jijy Philip come from?

He assisted me in Bhoot. He used to work in a television channel before. He came to interview me, joined me as an assistant and never went back to his work. One day, I narrated my story idea and he decided to work on it for three months.

Why would I want to see a small thriller from your production house after seeing the big Sarkar?

I don't think cinema is big or small. It's just good or bad. I feel the emotional hookline of My Wife's Murder and the sudden eruption of violence between a married couple are things everyone would identify with. And the way Jijy has shot the film is truly international.