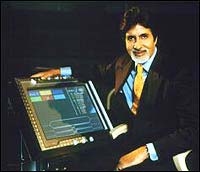 He came, saw, and managed to conquer yet again. Amitabh Bachchan [Images] speaks to Subhash K Jha on the return of Kaun Banega Crorepati.

There was no film released this week, and I feel KBC is responsible.

That may be because of the weather. It has nothing to do with KBC. I don't know how  good or bad I am on KBC this time around. That is for viewers to judge.

Did KBC schedules go haywire because of the rain?

Oh yes! The crew couldn't make it to Film City. Some contestants couldn't make it. Everything had to be re-scheduled. As everything was planned three months ahead, the entire schedule was destroyed. I had to shoot three episodes instead of two, to make up for lost time.

Amitabh: The real prize of KBC

The schedules of two of my underproduction films, Babul and Family, were also ruined. I was shooting till 4 am. Television is psychologically draining. It requires 110 per cent of your concentration.

Are audiences expecting far more out of KBC this time?

Well, the prize money has doubled. There's an additional lifeline. There's money for the contestants whether they make it to the hot seat or not, as opposed to earlier when 9 out 10 contestants just sat around. Now it's far more participative, both for contestants and viewers.

A lot has changed...

Do you feel the heat of swollen expectations?

No! I was committed to do these extra episodes for Star, and I'm doing them. I have to do my job, and I hope I do it adequately. As far as my presence on KBC is concerned, I may have been a little more formal with contestants ealier. Now, I'm a little more casual. The wardrobe is also a little more casual. But that's not my doing. I wear, say and behave in the way the channel asks me to.

'You can't make another KBC'

Television has failed for all large-screen actors except you.

That is God's grace. I am thankful to the people who made KBC successful. It's not me. It's the concept taken from the international model for Who Wants To Be A Millionaire that worked. I just happened to be at the right place, at the right time. I am just one anchor. The show is running successfully in 80 countries, hosted by many prominent personalities. In some Far Eastern countries, the most popular actors are anchors of the show. So too in South Africa. So it isn't me. I do nothing on KBC that isn't already tabulated by the show's regulations.

Why weren't you seen doing anything else on TV?

I do have certain other commitments on TV, but my contract with Star forbade me from doing any other television shows until KBC was out of the way. Other offers just had to wait.

What difference do you feel between KBC then and now?

There is always a great deal of apprehension while attempting something new. The first time around, the medium was completely new to me. The level of anxiety has reduced now, but the tension and energy remain. Also, in the past two years, I've been seen in cinema and on television extensively. There have been many films, ads and public-interest announcements on TV. I don't know whether that's an advantage or disadvantage.

People just can't have enough of you.

Your latest film, Viruddh [Images], has been widely appreciated.

Yes, we've pulled  through. As its producers, we won't lose any money. A lot of people were moved by the theme. The media covered the film generously. It's a small new beginning for AB Corp Ltd. Now we're doing a joint venture with Keshu Ramsay called Family. Rituparno Ghosh's Antar Mahal, which we've produced, is going to Locarno. It has also been selected for the London [Images] Film Festival.

Have you seen Antar Mahal?

Not yet. But Jaya has, and she loved it. It's her kind of film.