My hopes on being on Kaun Banega Crorepati kindled briefly and then were cruelly snuffed out.

I had no dreams of being a crorepati two times over. No duguna umeed for me. All I wanted was to be in the audience as Amitabh Bachchan [Images] grilled the contestants in the hot seat.

That too, was no easy task. And as I realised later after much heartache and expense, it would prove to be mirage in my case.

I joined the contest run by my mobile service provider Airtel for an audience seat on the show in early July. The rules were simple enough. Call 646, ask for KBC and answer the questions asked.

If you thought that all I had to do was answer one question and get on the next flight to Mumbai, you are wrong. Moreover, the terms of the contest made it clear that I travel to Mumbai and stay there at my own cost.

Airtime for the contest was Rs 6 per minute. And Airtel was determined to keep me on the line for as long as possible.

Fair enough. I knew the rules and had agreed to abide by it.

To win, I had to get three keys during one call. Getting each key entailed answering at least five out of the 20 questions (by a recorded voice/human, I could not figure) in each round.

On my first call, I got through the first round easily enough. The second round was tougher, but I hung in there. The third round was downright tough. Who won this Emmy in this particular a year and the like. Now I was in uncharted territory. I knew a few and guessed most. And guess what? I was eliminated.

The charge on my prepaid card was lighter by around Rs 60.

The trick in prolonging the call was simple. If I so much as whispered during the question, the voice would simply stop, and repeat the question.

This was going to be tough. I pondered for a day whether I should try again. An audience seat at KBC was going to give me massive bragging rights in my small town called Kundapur in Karnataka.

The next day I called again. The first round was the breeze, the second round took a few more minutes of my airtime and I flunked the third. Must watch the Emmys next year.

You would have thought that I had had enough. But the allure of watching Mr Bachchan up close and personal was irresistible. So I tried a third and final time. Same old story, failed in the third round -- but I got three questions right.
I had tried and failed. About Rs 200 lighter for airtime and wiser. I forgot about it.

Until I got an SMS from 646 on July 16. It said 'You have qualified for an audience seat on the KBC show. Pls call 64649 to confirm your availability.' 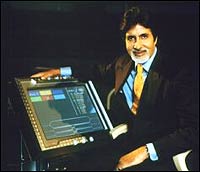 With mounting excitement, I did that. Which led to another SMS from Airtel. 'Please confirm audience seat on KBC show though e-mail to kbc_airtelshow@yahoo.com within 24 hours.'

I was out of the house in a flash and shot off an e-mail giving my age and other details and confirming my availability. I was also told that the shooting for the show would be between July 23 to July 30 at Film City in Goregaon, Mumbai.

That was the last I heard from Airtel.

When I tried calling 646 a couple of days later, KBC had disappeared. Now they were hawking ringtones and other stuff, that was of no interest to me. Suddenly there was no one who would tell me the status of my prized audience seat. But I wasn't giving in so easily.

With the SMSes saved carefully on my mobile and a printout of the e-mail sent to Airtel, I set out for Mumbai and reached a day in advance of the shooting.

In Mumbai, the Airtel customer number was 121. I sent them an SMS asking about the status of my seat. They SMSed back saying that they would reply to my query in 24 hours.

I wasn't waiting 24 hours. So I landed up at Film City. There were teeming hordes trying to get in. Some were blatantly bluffing to try gatecrash. But I found a few with stories similar to mine. Clutching computer printouts of the mail they sent and brandishing mobile phones with messages from Airtel, for anyone interested in looking.

I wasn't interested in gatecrashing anywhere. When they said I could not get in, I gave up and returned.

That evening I got an SMS from 121 saying that my seat was cancelled because I had not confirmed my availability. I SMSed back saying that I had and that I had a printout to prove it. They said they would get back in 24 hours. They never did.

I stayed back in Mumbai for a week, hoping for a miracle. Instead of seeing Mr Bachchan, I got caught, away from home, in the great deluge of July 26. I saw the kindness of strangers, who sheltered me, an outsider who hardly knows the city, for nearly 18 hours.

I am back home now -- with no bragging rights, no audience with Mr Bachchan but far lighter on my airtime and wallet.