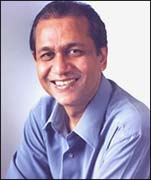 Tonight is one of Indian television's most anticipated nights. It marks the return of India's groundbreaking quiz-gameshow, Kaun Banega Crorepati, as KBC 2.

Subhash K Jha caught up with the show's creator, Indian quiz guru Siddharth Basu to find out what the buzz is all about.

What provisions have you made to ensure optimum viewership this time?

There's always room for something good to come back, and KBC is something viewers were waiting to retrieve. As producer, I'm trying to make sure KBC is the best programme that can ever be. It was a responsibility I took on, and I'm enjoying it. As you know, the show's demographic has changed dramatically since it was last on air. Quite simply, far more people will watch it now than they did the first time. The number of younger viewers has also increased. Though there are cosmetic changes, the soul of KBC remains unchanged.

Besides, Mr Bachchan's range of style and performing abilities is evident. I think his persona is different now, more versatile. During KBC the last time, he was more formal and more of a traditionalist. This time he's more informal. I think there are value additions across the board. Everything is the same as the last time�only better. We've accentuated the positives.

(laughs) There you are. The prize is double�

But is it just about the prize money?

It never has been. Past experience on television, including several KBC clones, proves it. At the same time, the huge prize money does heighten the excitement. The drama will depend on the contestants. If they wavered for a crore, imagine how many second thoughts they will have about two crores!

Will the format of questions change now?

We re-set the orientation of the questions. Last time, there was much more focus on the Hindi heartland. Now, we've decided to make the questions more across-the-board, accessible and young. It's not just about the geeky; you can't do well on the show by just cramming. There'll be even less textbookish stuff than the last time. The contestant needs to have a good head, and has to be able to make connections. There's a lighter feel to the show.

Lots of questions on cinema?

Somehow, cinema is not as pan-Indian as you think. You'd be surprised, but the biggest responses on the phone questions are not for cinema, but mythology, which is ahead by leaps and bounds.

After KBC, did your other projects achieve the success they deserved?

I've been around for too long. I suppose everyone expected me to produce a Godzilla. You can't lay a golden egg each time. Mr Bachchan had the option of doing multiple roles in multiple films, whereas I, as the producer, was expected to deliver a  KBC routinely. But, even globally, the international version of KBC happened once in ten years. It requires a tremendous amount of resources and projection. American Idol has had some successful spinoffs, but not How To Be A Millionaire (the KBC original).

I did bring in the same professionalism and integrity to my other quiz programmes like Mastermind on BBC and Bluff Master [Images] on Star One, modeled on the American gameshow Dirty Rotten Cheater. But you can't deliver another blockbuster like KBC.

How much does Mr Bachchan's personality matter to KBC this time?

More than before, much more. Between the last time and now he has experimented and succeeded with so many roles in cinema. As a performer, he's more open to experimentation. He enjoys the television medium. I share a good working relationship with Mr Bachchan.