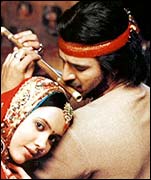 Subhash Ghai's saga Kisna may not have opened to full houses this year, but it will soon open the prestigious Gwangju International Film Festival (GIFF) in South Korea.
GIFF has invited Ghai and lead actor Vivek Oberoi [Images] for the opening on August 26. "Kisna has truly been a challenging project. I am overwhelmed by the appreciation it has received at various film festivals across the world. I am also thankful to GIFF," Ghai said.
"Despite the lukewarm response at the box office, the film will remain my dearest project," he added.
Special: Showcasing Kisna
GIFF is one of the most acclaimed festivals in South Korea where films from across the world are screened. Now in its fifth year, it has managed to attract noted filmmakers from across the globe. The festival offers learning opportunity to enrich and enhance cinema as an art.
Kisna, released in January 2005, starred Vivek Oberoi and introduced two new faces -- Isha Sharvani [Images] and British actor Antonia Bernath.
Antonia appears on the list of 20 faces to look out for in Tatler magazine, and plays Priscilla Presley in the American television miniseries, Elvis, about the life of Elvis Presley [Images].
The screening of Kisna at GIFF also coincides with the worldwide release of Ghai's new film Iqbal, directed by Nagesh Kukunoor (Hyderabad Blues).