Why a flop called SEZ remains attractive to politicians

SEZs account for just about a third of India's merchandise exports (and roughly the same proportion of services exports).

Yet, the notion of creating global manufacturing centres of the kind that propelled China to superpowerdom retains a durable appeal within the Indian policy-making establishment, notes Kanika Datta. 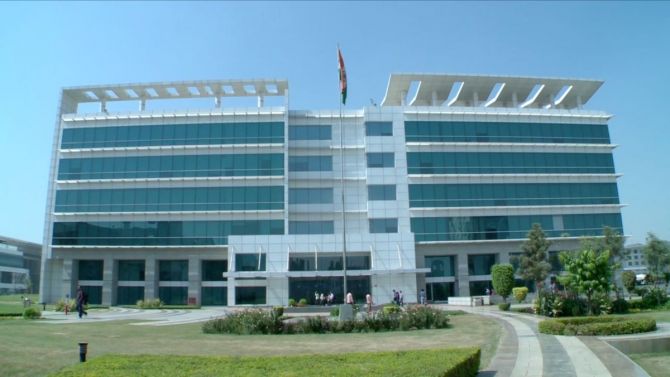 In the melee caused by the abrupt national lockdown on March 24, the sun set unnoticed on a key income tax break for Special Economic Zones (SEZs) on March 31.

The post-lockdown economic tumult has distracted from the several calls over December and January to extend the 100 per cent income tax holiday on export income from SEZs in the interests of attracting foreign investment for the prime minister's signature Make in India programme.

The fascination with SEZs endures, though they represent one of the most consistent failures of economic policy since 1965, when Kandla, Asia's first such zone, was set up.

Even after a high-profile new policy was announced in 2005, SEZs account for just about a third of India's merchandise exports (and roughly the same proportion of services exports).

Yet, the notion of creating global manufacturing centres of the kind that propelled China to superpowerdom retains a durable appeal within the Indian policy-making establishment.

A good part of the SEZ appeal lies in the promise of insulating manufacturers and service providers from the chaotic realities of doing business in India.

Unlike China, which modelled its SEZs on the Shannon free trade zone in Ireland to offer global manufacturers the advantages of giant integrated efficiencies and economies of scale, the principal impulse for India's SEZs was to offer businesses shelter from troublesome rules and regulations and tax laws.

But the United Progressive Alliance's well-meaning 2005 efforts to revive the SEZ concept ended ignominiously; just about a third of those that received approval went into operation and several operators, who had gambled on SEZs as a real estate play, were forced to deregister land when their projects were non-starters.

On paper, the 2005 SEZ Act certainly offered a systemic approach -- duty free imports of raw materials, income tax breaks and exemption from domestic sales tax and excise (these were the pre-GST days).

A special purpose Board of Approval, chaired by the commerce secretary, would scan proposals and each zone would have a single window authority to provide administrative, infrastructure and other facilities.

In short, India was to be transformed into an agglomeration of streamlined futuristic enclaves with First World physical and social infrastructure.

But if this updated Utopian (or at least Chinese) vision foundered it was because SEZ policies were completely unaligned with other policies, principally those related to land and labour, the permanent Achilles' Heels of investment in India.

After much fierce debate, efforts to give SEZs relief from inflexible labour laws and labour inspections and so on were turned down (this was when the Left parties still had some influence in Parliament).

If onerous compliance -- there are 674 compliances at the central level and 26,484 at the state level, according to Teamlease Services -- removed one element of the attraction for SEZs, the sheer difficulty of acquiring large tracts of land became the other.

Soon enough, SEZs were among the several industrial projects unwittingly caught up in the toxic politics that came to characterise land acquisition by business and industry, led by the redoubtable Mamata Banerjee and her successful campaign to destroy Tata Motors' car plant in Singur.

The upshot of this was a law stipulating compensation levels that made land acquisition prohibitively expensive even as the Narendra Modi government's early attempts to alter this by way of an ordinance foundered.

And then, of course, came the reckoning on revenue foregone.

Modi's quest for a streamlined tax system sans exemptions and loopholes resulted in then finance minister Arun Jaitley decreeing a sunset clause for SEZ tax breaks as March 31, 2020, in 2016, which the latest Budget reiterated.

Politicians are well aware of the impediments to investment in India but the absence of a viable social safety net makes it politically difficult to formally campaign for easier hire-and-fire laws or lower compensation for land losers.

The China model of creating Township and Village Enterprises to support rural labour who lost their livelihoods from the giant land acquisitions for SEZ seems not to have occurred to any Indian leader.

Nor has the possibility of mobilising the vast land banks available to the government via Port Trusts and public sector units.

Falling global demand since 2008, the confusions of the GST after 2017 and the successive rise of protectionist tariffs from 2019 have been triple whammies for exporters, including those from SEZs.

And yet, in mid-2019, the Modi government pushed through a controversial amendment to the 2005 Act, which first appeared as an ordinance, to widen the definition of businesses permitted to set up shop in SEZs to include "trusts and any other entities the government may permit from time to time".

Why trusts or "any government entities" need to be operating in an SEZ no minister could explain adequately.

But clearly, a policy that has failed again and again mysteriously retains its attractions for the political class.