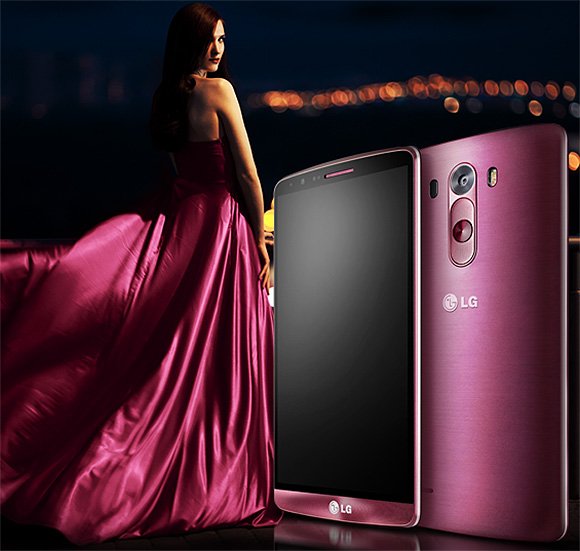 LG G3 will face stiff competition from the Galaxy S5, which is available for less than Rs 40,000 online and the HTC M8, which wins the style battle by more than a mile.

LG was slow to join the flagship party this year. Of course the G3 arrived at the party earlier than expected, but it seems to be the perfect time.

The HTC One (M8) was launched long back and it’s been some months since the launch of Samsung’s S5.

With Apple’s big-ticket launch still a couple of months away, this device won’t get lost in the flurry of launches. Let’s check out what the LG G3 has to offer:

The phone is big but doesn’t feel so in the hand. It provides a good grip with the sides shorn of any buttons.

LG’s signature power/lock and volume buttons at the back of the phone needs some getting used to but once you get the hang of it, are pretty comfortable.

A caveat: You will either love or hate the feature — there’s no middle path.

Therefore it will be best if you can try out the phone before you buy. 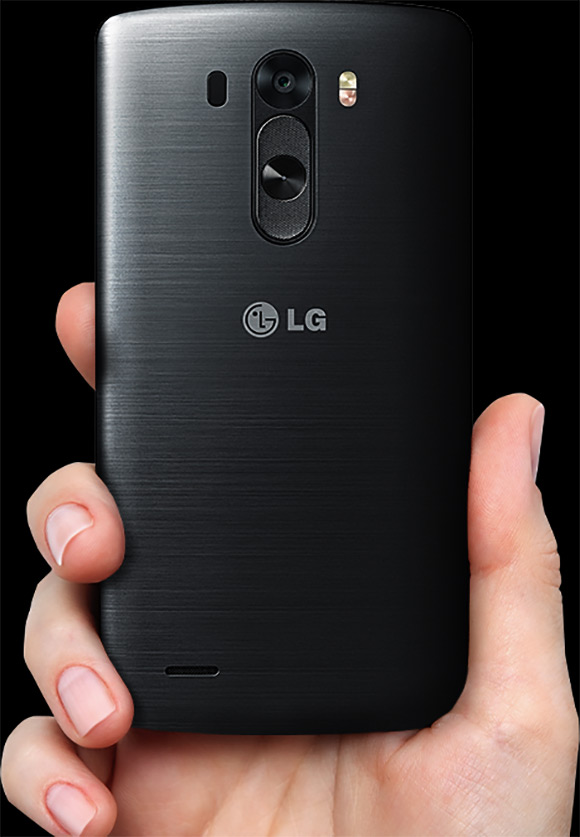 The top edge of the phone houses the infrared sensor and noise cancellation microphone while the bottom edge has the headphone port, the microUSB port and the microphone.

The 5.5-inch screen has an extremely thin bezel on its sides while on top is the notification LED and the 2.1-megapixel (MP) camera on the left of the earpiece.

The bottom edge just has the LG logo.

The back panel is dominated by the shiny power/lock button below the 13-MP snapper, and the volume keys just above and below this shiny button.

The LED flash and focusing IR sensor flank the camera.

The speaker is at the bottom left of the back cover.

The review unit was the 32GB version in white and the back cover had a matte finish to it.

The battery of the G3 can be taken out, and needs to be taken out every time one needs to access the microSIM slot. 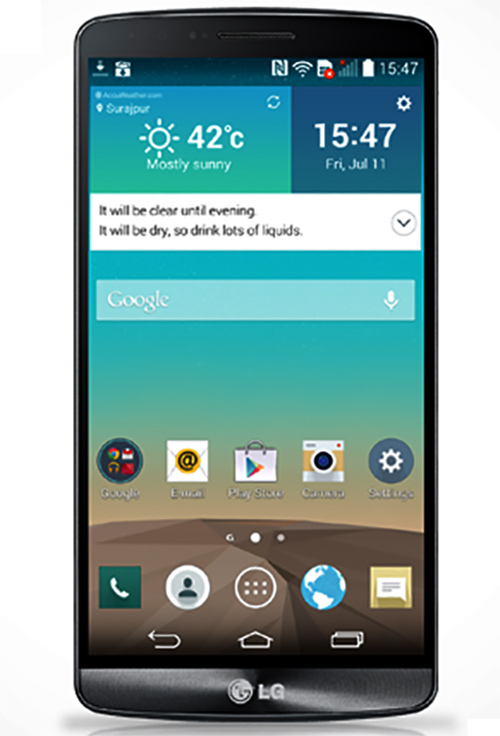 The G3 boots up pretty fast and presents us with LG’s customised user interface (UI) running on Android 4.4.2.

Unlike the G2, the UI of which was infamous for its cartoonish look, the G3’s interface is toned down to fit right in board rooms.

There are useful additions such as colour-coding categories of core apps such as contacts and messaging as well as additions such as the Smart Notice, which hangs just below the weather widget and offers useful tips such as “It may rain in the afternoon, so you may want to take an umbrella.” 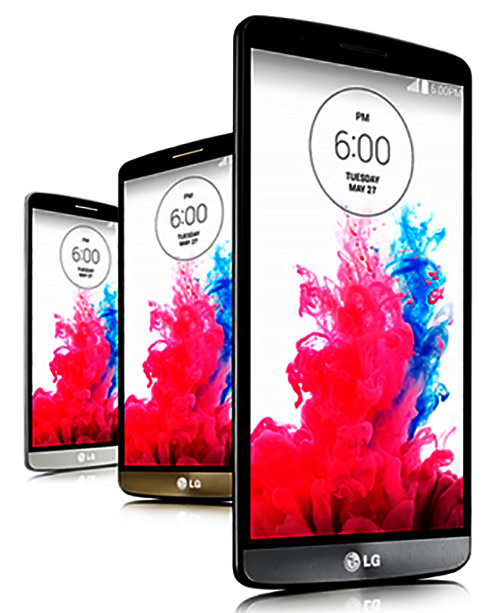 That’s not all. If one swipes to the right from the home screen, one gets to LG’s Health app, where one needs to fill in details such as gender, age, height and weight to be given a BMI count, a target weight and a recommended daily goal to burn calories.

One can then access a pedometer or record tracks when one indulges in activities such as walking, running, cycling, hiking and even inline skating.

While the app is an useful one, we feel Samsung’s S Health has more options.

But one feels we can truly test the app only in conjunction with a smartwatch, like the one LG launched along with the G3.

LG has also bundled in an app called Smart Tips which provides suggestions and links to videos to how best use your phone.

While it’s useful to a certain extent, we don’t know if users will stop by to watch the videos. 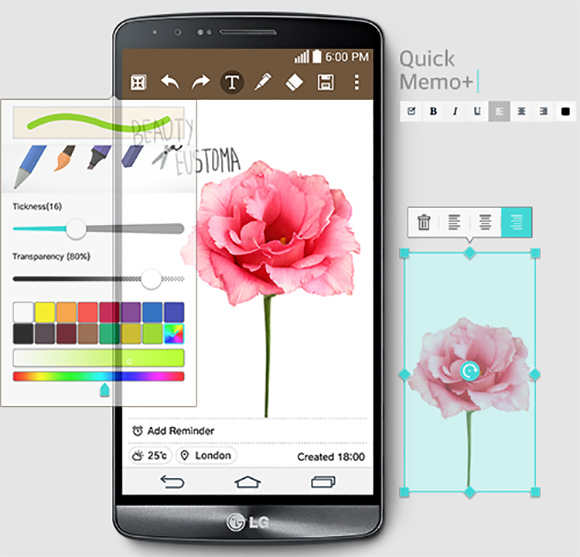 Another point to note is the clean interface the G3 has, especially regarding the notification bar.

This has been massively stripped down since the last time and is also customisable, providing more viewing area.

A very useful feature we found on the notification screen was the presence of sliders for brightness and volume, very useful while using the phone in landscape mode.

One also has the option of switching on or off the QSlide drawer of apps. Very nice!

The icons themselves look nearer to that from Apple’s than Google’s mobile OS, and that is kind of nice. And there aren’t too many screens to confuse you. 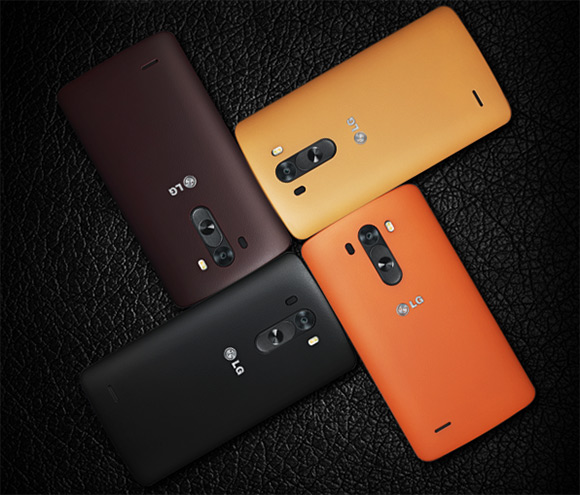 In case you're not quite comfortable locking and unlocking the phone with the button on the back, one can use the knock feature to lock/unlock the phone.

It was a kind of hit and miss in the time we used the G3.

LG still bundles in the usual suspects such as ThinkFree Viewer, QuickMemo+ and Quick Remote (which paired very easily with our TATASky HD+ box but couldn’t be paired with a Voltas AC).

Also present is SmartWorld, which has apps curated by LG. 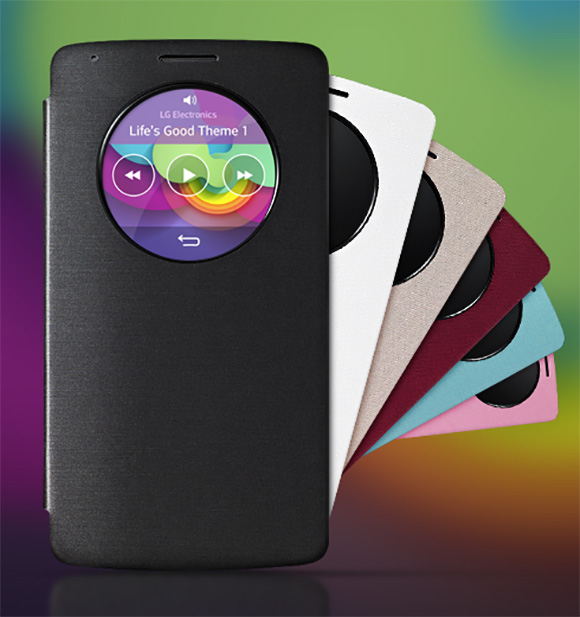 The G3 also has the usual bells and whistles about dual windows, gestures keeping the screen on only if someone is looking at the screen.

QuickCircle case is another interesting interface, wherein apps can be opened on a small portion of the case with the cover closed.

The only other phone in the market with this kind of resolution is the Oppo Find 7.

The preloaded videos are a treat to watch on the phone’s 5.5-inch screen, which definitely features sharper pictures than the screen of the iPhone 5S.

The vivid colours and the brilliant whites notwithstanding, the display comes into its own when one views text — which has never seemed crisper on a phone screen.

Viewing angles are also quite good and the display doesn’t suffer even in direct sunlight. 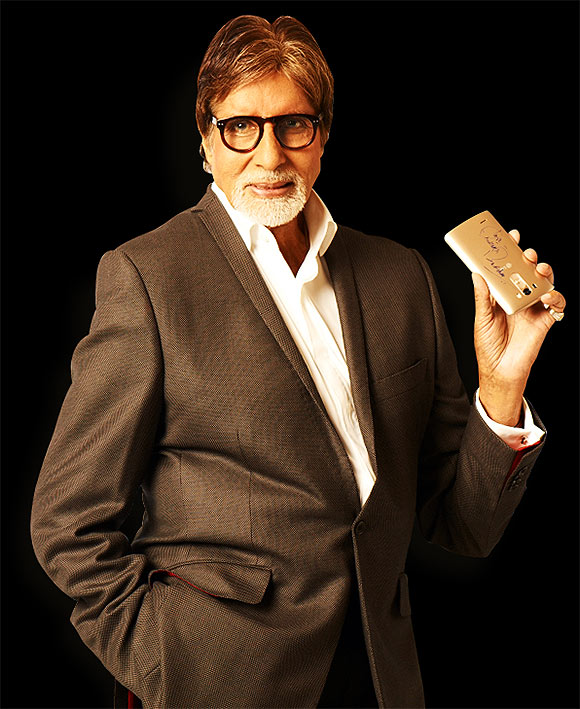 Playing Asphalt 8: Airborne on the G3 was a fabulous experience because of the powerful processor and the 3GB of RAM on the review unit, the moment we came to terms with its form factor — the phone shows it’s actually a phablet only when held in landscape mode.

We pulled a HD version of Frozen from the home media server and had a lot of fun watching the movie in bed.

The G3 is one of the few flagship phones which has an FM tuner on board.

But the speakerphone, while its quite loud, tends to get muddied while listening to music at high volumes, so we made use of the bundles QuadBeat 2 earphones.

While not audiophile-grade, these cans deliver an enjoyable experience. 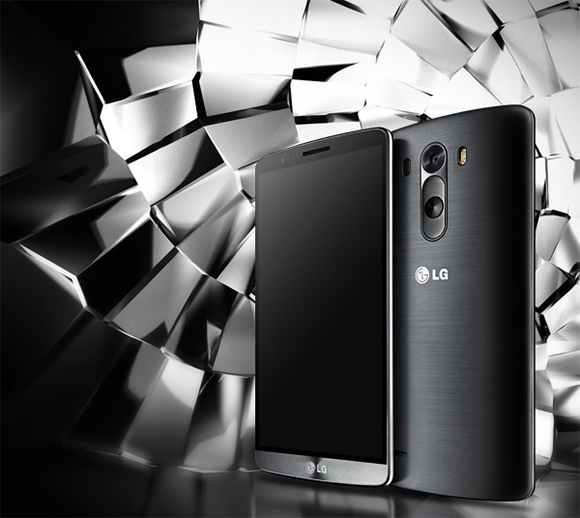 The camera interface of the G3 believes in keeping things simple: Thus it has only a back and options button on the main screen.

The options button gives access to the modes and other menus, which don’t offer the kind of customisation cameras on other high-end phones do.

That said, the laser-assisted focus of the 13-MP snapper is extremely fast and is great at taking candid shots.

While some noise is present in low-light snaps, the results are quite good otherwise. Outdoors, close-ups are great while, landscapes tended to miss some details.

The 2.1-MP front cam is great for selfies, especially because a portion of the screen turns white to make do as a ‘flash’ while clicking them. 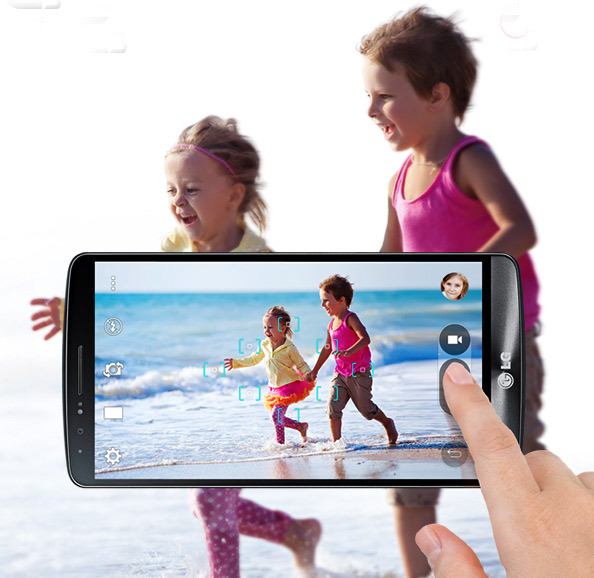 With a massive 3,000 mAh battery, the G3 shouldn’t need much charging, but the massive QHD screen is a battery hog so we could comfortably get through the day with regular usage.

The LG G3, at Rs 50,990 (for the 32GB version),  is possibly the best phablet money can buy right now but it will face stiff competition from the S5, which is available for less than Rs 40,000 online and the M8, which wins the style battle by more than a mile.

Storage: 16GB/32GB expandable via microSD (up to 128GB cards supported)