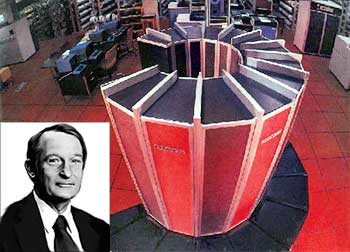 Supercomputers are super achievers, giving highest and most enviable performance at any given time. Cray 1, released in 1975, is considered to be the first real supercomputer.

Supercomputers were designed primarily by Seymour Cray, who started his own firm Cray Research Inc after leaving Control Data Corporation.

The Cray-1 cost  between $5 million and $10 million to build, and had a memory of 4MW semiconductor and speed of  160 MFLOPS (MFLOPS stands for Mega FLoating point Operations Per Second.). Building supercomputers was a passion for Seymour Cray.

Today, supercomputers are developed by companies like Cray, IBM and Hewlett-Packard.  The IBM Roadrunner, located at Los Alamos National Laboratory, US, is the fastest supercomputer in the world today.

Scientists around the world are experimenting with supercomputers and developing high-speed, power-packed computers.

Novo-G, hailed as one world's fastest and most powerful supercomputers of its type, has become operational at the University of Florida. This is a reconfigurable computer that can be from 10 to 100 times faster than other computers its size while using five to 10 times less energy.  The Novo-G project is led by Professors Alan George and Herman Lam at Florida.

Check out the top 10 supercomputers as per the TOP500 list. 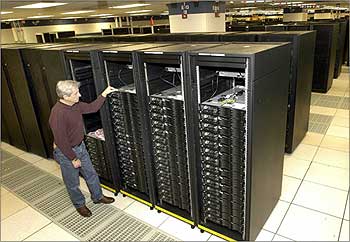 The world's most powerful supercomputer is IBM Roadrunner. Eight of the top 10 supercomputers are located in the United States.

Among the top Asian performers was HP's EKA - Cluster Platform 3000 BL460c at the Computational Research Laboratories owned by the Tata Group. EKA is ranked 18th in the world.

The Indian supercomputer PARAM Yuva Cluster is ranked 109th in the world.

With a speed of 1.105 petaflops, the Roadrunner system at Los Alamos National Laboratory (LANL) was built by IBM.

In June 2008, it became the first system ever to break the petaflop/s Linpack barrier. It still is one of the most energy efficient systems on the TOP500 list.

It has the computing power of 100,000 of today's most powerful laptops. According to IBM, in the past 10 years, supercomputer power has increased by about 1,000 times.

It is also the fourth-most energy-efficient supercomputer in the world on the Supermicro Green500 list, with an operational rate of 444.94 megaflops per watt of power used.

Roadrunner will be used by the Department of Energy's National Nuclear Security Administration (NNSA) to perform calculations that vastly improve the ability to certify that the US nuclear weapons stockpile is reliable without conducting underground nuclear tests.

Rpeak: Peak performance of the system, measured in Tflops.

Rmax: The highest score measured using the Linpack benchmark suite. This is the number which is used to rank the computers. Measured in trillions of floating point operations per second, i.e. Teraflops. 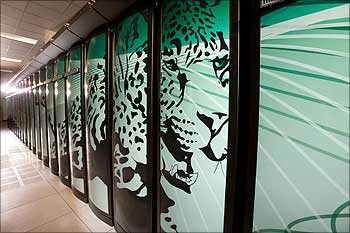 An upgrade to the Cray XT3 supercomputer at Oak Ridge National Laboratory, the Jaguar has increased the system's computing power to 54 teraflops, or 54 trillion mathematical calculations per second, making the Cray among the most powerful open scientific systems in the world.

Jaguar hit a speed of 1.059 petaflops shortly after its installation. This is the largest in the Department of Energy's Office of Science and is the major computing resource for DOE's Innovative and Novel Computational Impact on Theory and Experiment, or INCITE, program. 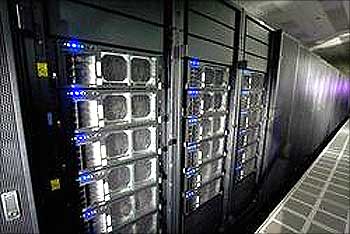 The Jugene - Blue Gene/P Solution, is the fastest supercomputer in Europe and the third fastest in the world.  Installed at the Forschungszentrum Juelich (FZJ) in Germany, it achieved 825.5 teraflop/s (trillions of floating point operations per second) on the Linpack benchmarks and has a theoretical peak performance of just above 1 petaflop/s.

The first laboratory in the United States to receive the Blue Gene/P was Argonne National Laboratory, according to the Top500 Web site. NASA's newest supercomputer at Ames Research Center has bagged three spots on the Top500 list of the world's most powerful computers.

One of the most powerful general-purpose supercomputers ever built, Pleiades also features the world's largest InfiniBand interconnect network. 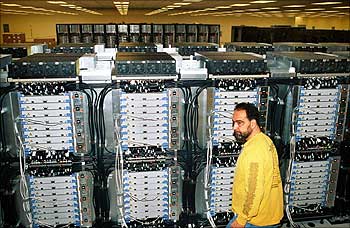 The first computer in the Blue Gene series from IBM, Blue Gene/L, developed through a partnership with Lawrence Livermore National Laboratory (LLNL), originally had a theoretical peak performance of 360 Tflops , and scored over 280 Tflops sustained on the Linpack benchmark.

After an upgrade in 2007 the performance increased to 478 TFLOPS sustained and 596 Tflops peak. 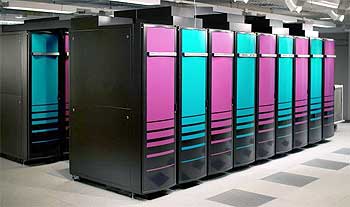 The National Institute for Computational Sciences (NICS) has the new Cray XT5 called Kraken XT5. The new machine replaces the Cray XT4. It is most powerful university-based system. 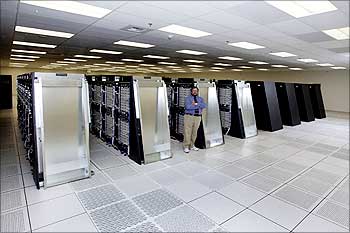 The IBM Blue Gene/P Solution is a follow-on product to the successful Blue Gene/L Solution.

The Blue Gene family of supercomputers has been designed to deliver ultrascale performance within a standard programming environment while delivering efficiencies in power, cooling and floor-space consumption.

It is housed at the Argonne National Laboratory in the  United States. 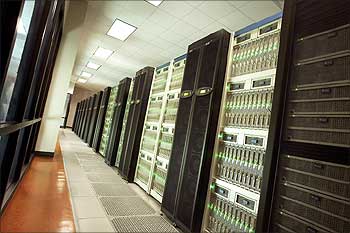 Ranger is the most powerful supercomputing system in the world for open science research.  Ranger marks the beginning of the Petascale Era in high-performance computing (HPC) where systems will approach a thousand trillion floating point operations per second and manage a thousand trillion bytes of data.

Ranger will provide more than 500 million processor hours of computing time, performing more than 200,000 years of computational work over its four-year lifetime.

Ranger is a collaboration between TACC, The University of Texas at Austin's Institute for Computational and Engineering Sciences (ICES), Sun Microsystems, Advanced Micro Devices, Arizona State University and Cornell University. 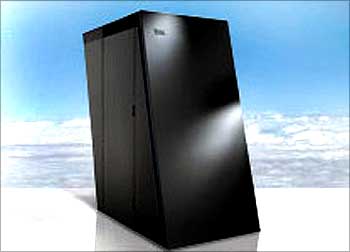 IBM's Dawn is installed at DOE's Lawrence Livermore National Laboratory. IBM now holds the number one position in the ranking of the world's most powerful supercomputers.

This is the initial delivery for the IBM's future 20 petaflop Sequoia system. 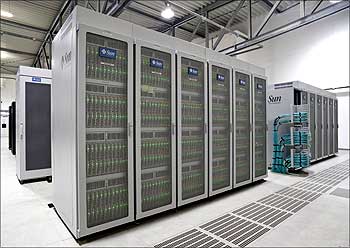 Companies from Europe and the United States have joined hands with Forschungszentrum Jlich research centre in Germany, to enter the future of high-performance cluster computing.

With the Jlich Research on Petaflop Architectures (JuRoPA) system, a new cost-efficient performance class of supercomputers can be developed.

A computer cluster is a group of tightly coupled computers working closely together using standard PC technology and very fast networks. They are ideal for tackling a wide range of simulation problems and comprise a large proportion of the world's most powerful computers.