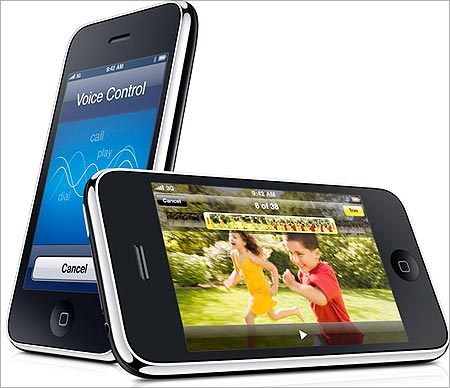 India is the world's fastest growing mobile phone market and a booming mobile user base, relatively unaffected by the economic crisis.

Thus it's not surprising that the world's latest phones are available in India. From the most cheapest to the most expensive, there is a market for every phone in India. Here's a look at some of the best touchscreen phones you would love to own.

The iPhone 3G is one of the sophisticated touchscreen phones in India. The fastest version called the iPhone 3GS is set to debut in India in August. It can quickly launch web pages, help you view e-mail attachments faster.

The iPhone 3GS is two times faster than than iPhone 3G. It can shoot video, edit it, and share it, trim the footage by adjusting start and end points. You can share your video in an e-mail, post it to your MobileMe gallery, publish it on YouTube, or sync it back to your Mac or PC using iTunes.

It also has a 3-megapixel camera and a voice control feature which recognises the names in your contacts and knows the music on your iPod. So if you want to place a call or play a song, all you have to do is ask.

It also has a built-in digital compass which automatically reorients maps to match the direction you're facing. iPhone 3GS offers accessibility features to assist users who are visually or hearing impaired. These features include the VoiceOver screen reader, a Zoom feature, White on Black display options, etc.

The phone also helps you surf the web from anywhere. Now you can share the 3G connection on your iPhone with your Mac notebook or PC laptop.

It is priced at $199 for the 16GB version and $299 for the 32GB phone. Apple said iPhone 3GS would make its debut in India in August, but has not decided the pricing in India. 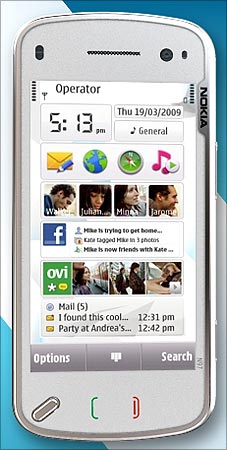 Another power-packed and superior phone from the Nokia family, this phone offers multiple sensors and better connection speeds, supports a wide range of multimedia files and has a large touchscreen and a full qwerty keyboard.

Nokia calls it a mobile computer with 3.5-inch  tilting touch screen. The Nokia N97 is set to beat its competitors, it  has more memory than the Palm Pre, the Apple iPhone 3GS.

Its features include tilting touch widescreen display, pre-loaded applications and 48GB storage including 32GB on-board memory with expandable 16GB microSD card and a 5 megapixel camera.  The N97 has full support for Nokia Music Store and offers continuous playback time of up to 1.5 days.

It is priced at Rs 36,119. Nokia has tied up with HDFC and Citibank for a 3 month EMI option at 0 per cent interest rate.

Dubbed as a mobile device for music lovers, the Nokia 5800 XpressMusic offers innovative features. This is Nokia's attempt to offer the best music experience through a phone.

You can use the Nokia 5800 XpressMusic to connect to mobile broadband using WLAN or HSDPA (3.5G). You can find directions and locations with the integrated A-GPS and included maps. It is priced at Rs 18,000. 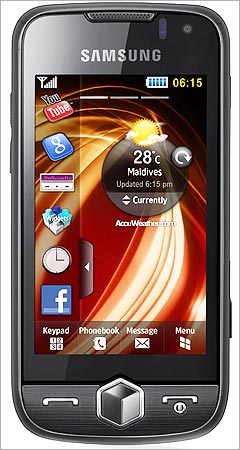 Samsung Jet is the latest touchscreen phone to hit India from the company. It offers a full touch and multi-coloured experience. This WVGA display has a four times hi-resolution screen. The built-in 800MHz application boosts performance and speed.

It also has multimedia features like music player, photo album, FM Radio, video player, games and quick access to the Internet. The built-in A-GPS guides you in the right direction while on the move by showing real-time directions and information in 3D form. Samsung Jet has a 5 megapixel camera. It is priced at Rs 24,150. 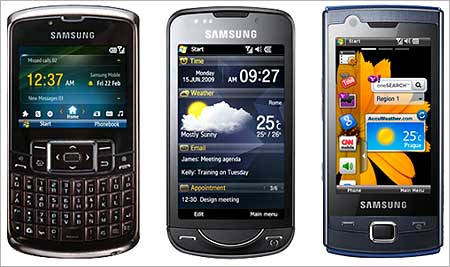 The Samsung Omnia is hailed as an 'iPhone killer'. Omnia SGH-i900 has a full touchscreen which supports Windows Mobile Professional 6.1.  Besides a TouchWiz UI, the Omnia offers an optical mouse.

TheSamsung Omnia has Microsoft PowerPoint, Excel and Word. The PowerPoint feature allows you to show presentations directly on projectors from the phone.  A 5MP camera along with a video camera add to its sleek features.

Samsung introduced the world's slimmest full-touch 8-megapixel camera phone in India last year. The Samsung Pixon has a 13.8mm slim design and many outstanding features. It is priced at Rs 28,000. 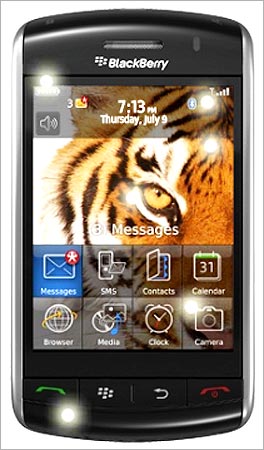 The Blackberry Storm has a high resolution 480 x 360 pixel colour display. The Storm screen offers a mouse-click feel when the user touches making touch-typing easier. It has a scratch-resistant touchscreen.

The virtual keyboard is standard qwerty, and comes with automatic spelling check and dictionary typing. The Storm is capable of providing a talk time of 6 hours and standby time of 15 days (356 hours).

It features 1GB of onboard memory, 128MB of NVRAM and an expandable memory slot support for a microSD card of up to an additional 32GB Stand-alone and assisted GPS. It is preloaded with BlackBerry Maps. 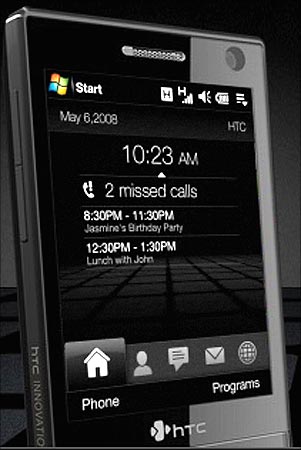 After HTC Touch, HTC Dual and HTC Cruise, the Diamond Touch is the fourth phone from the HTC family in India.. The company is all set to its latest phone called HTC Hero in India. It is Android-based phone, which will pose a tough competition to Apple iPhone 3GS and Nokia N97.

The first company to introduce a touch screen phone in India. The HTC Diamond Touch has a 2.8-inch touch screen with a touch-responsive user interface, TouchFLO3D, and ultra-fast HSDPA internet connectivity.

It offers a good online experience like a notebook computer, helping you use the Internet at speeds similar to a broadband connection. A 3.2 megapixel auto-focus camera and with a 4GB of internal storage helps keep all the files you need.

The integrated ultra-sensitive GPS will help you find your destination exclusive. HTC Weather, offers a constant view of weather at home and abroad. It is priced at Rs 27,500. 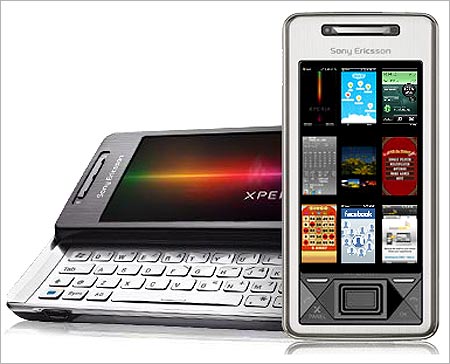 The Sony Ericsson Xperia X1 features an interactive panel interface that lets you customise the smartphone to your wants and needs.

It also has a built-in digital camera with screen viewfinder, dedicated menus and direct interaction with in-phone imaging and messaging features. 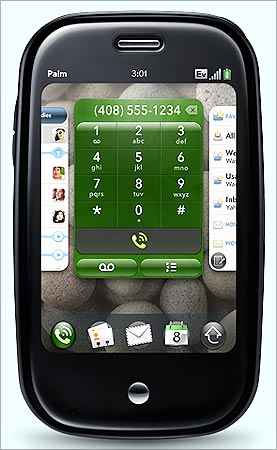 The smartphone features a vibrant display with multitouch functionality as well as a solid Web browser and good multimedia integration. You can keep multiple applications open and move easily between e-mails, maps, photos, websites.

The Pre offers 3G, Wi-Fi, Bluetooth, and GPS. It also has a built-in camera and flash. You can watch videos on the vibrant colour touchscreen. Users can slide out the keyboard for faster and easier texting.

You can rotate Pre for music, websites, photos, and videos in full widescreen glory. Palm Pre will be launched in India in two months time. The company is planning to price the product lower than the iPhone.

LG Arena is a stylish and fully-loaded multimedia phone which has just been launched in India. The phone has a new 3D S-class user interface for high quality audio and video output.  Arena uses Dolby mobile from Dolby Laboratories for a great sound quality.

It has a 3-inch WVGA screen with a sharper resolution. A 5 megapixel camera that captures clear images provides DVD-resolution video of great quality. The phone has a 40GB storage that helps you store many music and movie files. It also includes 8GB of internal memory and a 32GB microSD slot.

The phone's battery also has 30 hours of MP3 playtime. Video and photos can also be shared on social networking sites easily. It is priced at Rs 24,990. 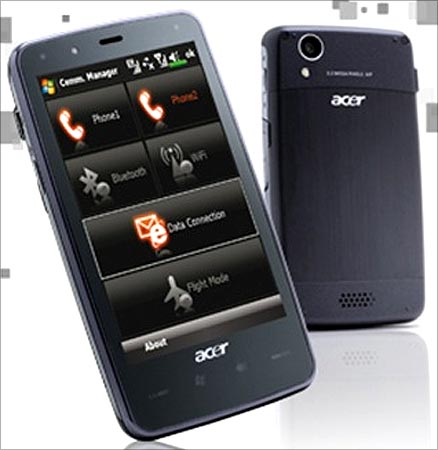 The Tempo F900 is an easy-to-use touch screen phone made for mobile browsing enthusiasts. 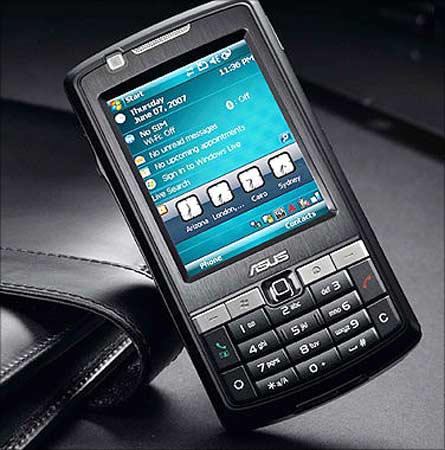 The Asus P320 is stylish, compact and sleek and loaded with lot of features.

The Autocleaner function makes sure applications which are not in use are are automatically shut down. Besides this, it has a 2MP camera, a 2.6"  TFT touchscreen display with 65,000 colours. It has a 128MB inbuilt memory with microSD support. It has an attractive price tag of Rs 12,900.