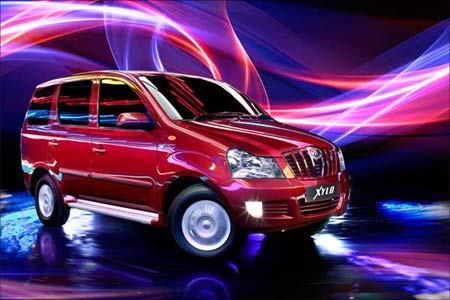 Mahindra Xylo targets one bird too many with its sedan-killer strategy.

On a cloudy day, some time during August last year, a car was zipping down the rain-soaked Mumbai-Pune expressway. It was doing over 130 km per hour, recalled the driver later on www.team-bhp.com, a popular forum for car lovers, when he noticed a camouflaged vehicle parked by the roadside. Just as he drove past it, the mysterious vehicle rumbled to life and much to his surprise whizzed past him within seconds.

The driver instantly recognised the make of the vehicle -- he had been hearing rumours about its launch for months. So he stepped on the gas and chased the vehicle, while his co-passenger aimed a cell phone at it to get some shots.

What they got instead were images of aimless streams of water cascading down the car's windshield that the vehicle splattered it with before disappearing into the horizon. The car in pursuit was a popular sedan and the one that splashed water on its face was a Mahindra Xylo.

This is an idea Mahindra & Mahindra automotive sector senior vice president (marketing) Vivek Nayer could have used for Xylo's announcer commercial. If nothing else, it could have saved the company some tongue-lashing from sedan customers it irked having dropped a container on a sedan and reduced it to scrap in the commercial released around its January 13 launch.

The said commercial went on to compound sedan owners' grief with a catch-line that prophesied that "the era of sedans is over". It provoked an enraged sedan owner into suggesting on his blog that M&M could do well to replace "sedan" in the catch-line with its own name.

Worse, the particular commercial made people wonder if the end of the Mahindra Renault Logan -- a sedan -- is nigh. "What happens to the Logan now?" Mahindra and Mahindra automotive sector chief of operations Rajesh Jejurikar shoots back: "It continues." 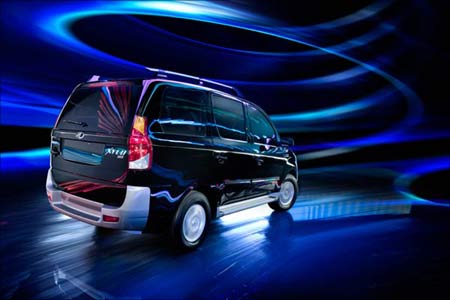 Positioning a utility vehicle as a replacement for mid-size sedans is not new in India. For a C or C-minus sedan customer who wants a bigger and better vehicle as he grows in affluence and his family grows in size, a utility vehicle or a multi-purpose vehicle is a cheaper option compared with a high-ticket C-plus executive sedan where he has to pay an additional 20 per cent excise duty.

M&M did a lot more than position the Xylo as a sedan replacement -- it asked people to trash their cars. "The idea was to shake up people into considering the brand. We needed something clutter-breaking for people to look at this category differently," reasons Jejurikar.

According to the Society of Indian Automobile Manufacturers, 220,000 utility vehicles were sold in India in 2008-09 and M&M's market share was 48 per cent. The company has entered the multi-purpose segment of this market with the Xylo.

This space saw sales of 140,000 units in 2008. It is at the moment dominated by the Toyota Innova which has a 36 per cent market share. The rest of it is populated by the Chevrolet Tavera, Tata Sumo Grande and ICML's Rhino.

Utility vehicle sales, to be sure, are not as robust as they used to be. After hitting 15 per cent growth in 2005-06, sales have plateaued -- 2008-09 sales in fact fell 9 per cent. The year was bad for the multi-purpose vehicles segment as well, which saw a decline of 13 per cent.

The mid-size sedan segment, on the other hand, was one among the few that continued to grow during 2008-09. It rose 6 per cent last year. Thanks to the Logan's dismal sales, M&M has an insignificant presence in this category. 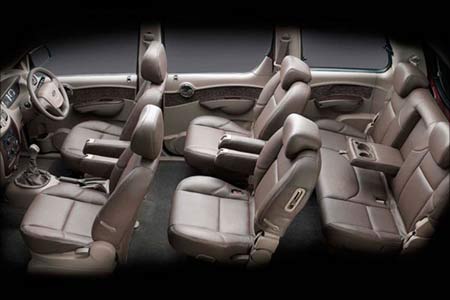 M&M executives feel that the Indian utility vehicle market has underperformed so far. Jejurikar points out that utility vehicles account for just 15 per cent of car sales in India, whereas the Asian average is 40 per cent.

"If the 15 per cent penetration grows to about 20 per cent, it would mean a 15 per cent CAGR for over four years. Even without having to go to a level of 40 per cent, where most of Asia is now, making a movement of this kind will mean a substantial increase in the size of the category," Jejurikar adds.

Given this, it turns out that M&M considers the combined segments of sedans and utility vehicle its playground and has entrusted the task of permeating the sedan market to the Xylo. Jejurikar calls it the "increasing the pond" strategy. However, onlookers call it an improbability.

Why would a sedan owner, who loves the three-box, comfortable, spacious, low-stance look and feel of a sedan, junk his car and switch to an "angry looking" hulky off-roader from a manufacturer known for rugged utility vehicles?

On his part, Jejurikar is confident. "With the Xylo, we will fulfil the unmet needs of a sedan customer," he says. To support his argument, he refers to a TNS India Auto Need Segmentation report that studied the influence of emotive needs of customers on car purchases in India.

The study listed six key needs that drive the purchase of a car -- status, control, security, comfort, potency and liberation. Pradeep Saxena, who heads the auto research division of TNS India, says a sedan customer will move to a multi-purpose vehicle if he gets a better deal in four need segments: Space, comfort, status and potency.

M&M seeks to fulfill these needs through the Xylo's much-publicised features, says Nayer. Extended wheelbase, the seven or eight seat option and facilities such as flatbeds, foldable dining trays and parking sensors can take care of the space and comfort needs, he says.

The 2.5 litre CRDE engine from the Bolero, tuned for more power and torque, along with M&M's macho brand appeal can fix the potency bit. As for the status quotient, the "time of your life" campaign is aimed to "associate the feeling of having arrived in life with the ownership of the car," Nayer says.

"A multi-purpose vehicle perspective is that I can fit my family of seven or eight. But even if I have a family of four, there must be a reason for me to look at a product like the Xylo. Focusing on a consumer's aspiration is, we believe, a category changing trigger," Jejurikar adds. 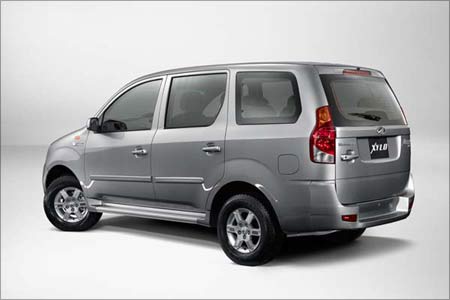 If all else fails, Mahindra still has the price card. The Xylo's price tag of Rs 625,000 (Delhi ex-showroom price of the entry-level E2) puts it closer to the mid-size sedan segment than all its rivals. "If a customer wants to upgrade from a Swift Dzire (the diesel variant is priced at Rs 540,000 in Delhi) to a utility vehicle, he can easily go for a Xylo," Jejurikar says. More important, its price tag is Rs 1.8 lakh (Rs 180,000) below that of the Toyota Innova.

Data shows that Toyota sold 2,979 Innovas and Prados during March, and M&M claims it sold 3,171 Xylos during the same month. At any rate, it is too early to tell if the Xylo is a threat for the Innova, feel experts.

"Even the Logan did extremely well during the first two months following the launch, but sales fell sharply within a year. We will have to wait for the next six or nine months to see whether the Xylo can be said to be an Innova-challenger," says an industry analyst who has served M&M in the past.

Moreover, the Innova enjoys unflinching loyalty from its customers, some of whom even scoff at the Xylo's grandstanding. "A multi-purpose vehicle that claims to be posing a challenge to Innova does not even offer basic safety features such as ABS (anti-lock braking system) and airbags," says Manav Shah, a financial consultant and an Innova owner.

Jejurikar responds, "We are a couple of months away from ABS, and few months after that from airbags. It is in the development pipeline."

Ernst & Young Partner (automotive practice) Kapil Arora cautions that, since the Xylo is positioned between the Bolero and Scorpio, it can potentially cannibalise some of the existing sales from the two brands.

M&M, in fact, acknowledged recently that it witnessed cannibalisation of 25 per cent between the Xylo and Scorpio. Consequently, M&M slashed the Scorpio's price by Rs 34,000-70,000 last month, bringing it close to the Xylo's price band in order to stop the cannibalisation between the two.

The Xylo has done well so far. Total bookings till April 20 have crossed the 15,000 mark, informs Nayer, even when the company has put a cap on the number of bookings in small cities. What is more, of the 335 M&M dealers based in metros and non-metros, only 127, most of them based in metros, are taking Xylo bookings as of now.

"The attempt is to create visibility first," says Jejurikar. There is another important reason behind the booking cap. It buys the company some time to ramp up production capacity at its Nashik facility which, at the moment, can roll out only around 2,000 Xylo cars every month.