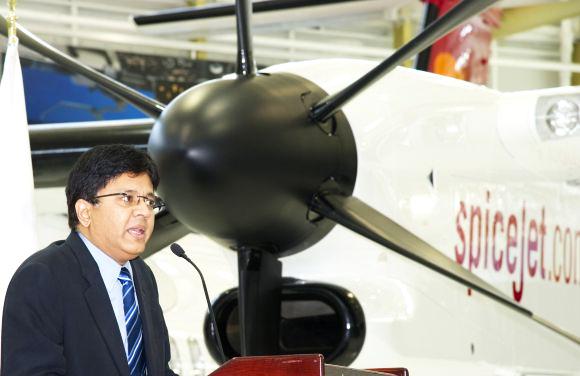 On January 11, SpiceJet put for sale 1 million tickets at Rs 2,013 apiece (all-inclusive). The window of discount would stay open for 72 hours, and was meant to attract traffic during the lean season (March to June).

On a normal day, the airline would sell up to 45,000 tickets; but on those three days, it sold 700,000 tickets. Such was the rush that travel portals were left gasping for breath.

Some had to suspend sales for a while. Consumer anger spilled over to the social media.

In one stroke, Kalanithi Maran, the promoter of SpiceJet, had stirred the aviation market that had gone sedate with the exit of Kingfisher Airlines.

Like always, Kalanithi, 48, kept himself away from the limelight. Actually, that's how the owner of SpiceJet, the Sun media empire and SunRisers, the Hyderabad franchise of the Indian Premier League, chooses to be.

Forbes had estimated Kalanithi's wealth at $2.8 billion in 2012. That makes him the richest man in Chennai.

I have met him twice, that too at the annual general meeting of shareholders of Sun TV. He shook my hand and directed all queries to his managers. 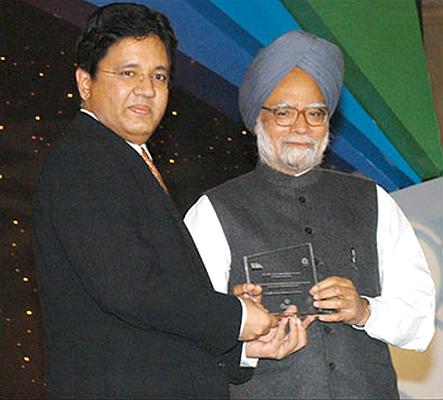 Kalanithi's security guards shielded him from journalists. It's only now that he has appointed a spokesperson: Sun TV CFO S L Narayanan.

Kalanithi stays in his bungalow on Boat Club Road in Chennai. The house is worth around Rs 100 crore (Rs 1 billion) - good enough to buy 20 3BHK flats in upscale Poes Garden and Nugambakkam.

Purchased from HSBC in an e-auction in 2001, it is surrounded by high walls. When the gates open, you can see huge open space.

He operates out of the 11th floor of Murasoli Maran Towers in MRC Nagar. Kalanithi drives to work in his Bentley (the registration number of all family cars is 1515) and is whisked to his office on the topmost floor by a special elevator.

His office is sprawling, and takes up almost the entire floor. The walls are fitted with several television screens, which helps him keep a close eye on the 21 TV channels in four languages (Tamil, Telugu, Malayalam and Kannada) he runs.

His media empire also includes 45 FM radio stations, a clutch of periodicals, a cable distribution network and a DTH company. 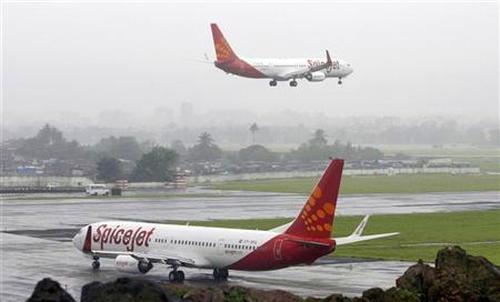 Image: SpiceJet aircrafts prepare for landing and take-off at the airport in Mumbai.
Photographs: Punit Paranjpe/Reuters

"Barring Tamil, I don't even know the languages in which we are running the channels," Kalanithi had said in an interview.

Those who have worked with Kalanithi say his business sense is sharp.

"When he was on the verge of closing the SpiceJet deal in 2010, I asked him why he was interested since the whole world had written off the aviation sector," recalls a relative, "and he replied that what is happening now is the worst, and from here on there will only be an upside. In exactly 12 months the industry bounced back."

Kingfisher folded up and fares improved, as a result. Airlines like SpiceJet gained significantly. Valuations improved.

Now that foreign airlines have been allowed to acquire up to 49 per cent in Indian carriers, SpiceJet and Kalanithi stand to benefit immensely.

SpiceJet recently informed the Bombay Stock Exchange that some investors have indeed evinced interest in the company.

There was a buzz that Qatar Airways could be the unnamed investor, till that airline said it was all speculation. 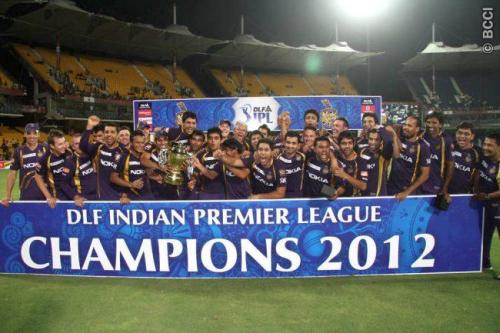 Image: Kalanithi Maran bought Hyderabad IPL franchisee for less than half the price of what Sahara paid for Pune.
Photographs: Courtesy, Shaun Roy/IPL

And he is ready to take risks. The purchase of the IPL franchise comes at a time when the cricket carnival faces uncertain prospects.

Kalanithi, say associates, made up his mind to invest in it the moment he saw the advertisement put out by BCCI. The paperwork was completed in less than a week, and the bid submitted in a month.

Kalanithi wants to exploit the synergies between cricket, media and entertainment. He can pack the stadium with celebrities when his team plays to draw in the crowds.

Narayanan recently told Business Standard that the investment would turn profitable from the third year and fetch a perpetual annuity of Rs 60 crore (Rs 600 million) from the fifth year.

"It's a joy to see him take decisions. He is very fast," says the relative. He is observant too.

A senior city journalist, who has interviewed Kalanithi twice in the last three decades, recalls that "for a small mistake, which no reader would notice, Kalanithi called him, screamed for 20 minutes and then hung up abruptly. After two days, when we met at a private function, he came and said don't take it to heart. He even helped us get an interview with Karunanidhi."

He is helped in business by a loyal band of friend-employees. Kalanithi had started Sun TV in 1993 with a team of 25, many of whom were his friends from college. Most of them are still there.

And he can be charming. A senior officer of a TV channel remembers that when he had gone to meet Kalanithi, his host came out to greet him and even opened the door of his car. "In his position, he didn't have to do that," says he.

Kalanithi, which means treasure trove or art and skill in Sanskrit, is called Kala or Pugazh (fame in Tamil) by friends.

After Don Bosco, a premium school in Chennai, he studied commerce in Loyola College. 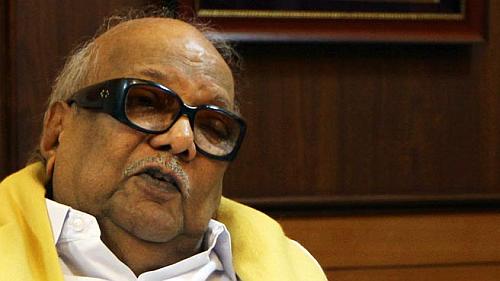 He became the president of the students' union and led an agitation on the Sri Lankan Tamil issue. This was the first and last agitation-turned-strike in the college.

Politics ought to have been in Kalanithi's blood. Murasoli Maran, the former Union minister and nephew of M Karunanidhi of DMK, was his father.

When Murasoli Maran died on November 23, 2003, Karunanidhi had wept bitterly at losing his "conscience keeper".

In the 2004 general elections, Karunanidhi offered the DMK ticket for Chennai Central constituency to Kalanithi.

According to Kalanithi's friends, by then he had got full time into business and therefore turned down the offer. The ticket then went to Dayanidhi. (He won and became the telecom minister in the Manmohan Singh cabinet.)

"I have no inclination or interest in entering politics; I only observe politics," Kalanithi had told Outlook in 2000.

A family friend says Kalanithi chooses not to speak on politics even at the dining table. The strike at Loyola, he insists, was the last overtly political act on his part.

That may not be entirely true. On June 29, 2001, the Tamil Nadu police had arrested Karunanidhi well past midnight. He was bodily lifted from his house and carried out. 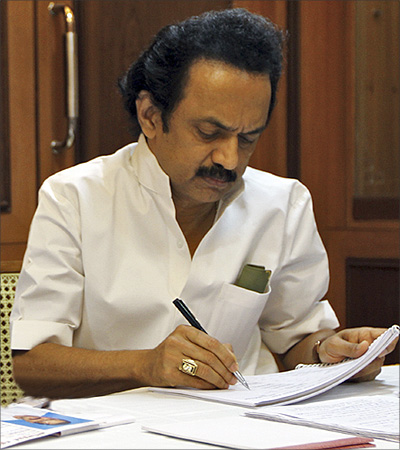 The clip, played ad nauseam on Sun TV over the next few days, led to a groundswell of popular sentiment against the AIADMK government.

In 2007, Dinakaran, a newspaper owned by the Sun group, published the results of what it said was a state-wide survey projecting Karunanidhi's younger son, Stalin, as the likely heir to Karunanidhi, with 70 per cent of the respondents supporting him, while older son Alagiri got 2 per cent.

Enraged Alagiri supporters vandalised the Dinakaran offices. The Marans were on shaky ground. Dayanidhi had to step down as telecom minister. (Andimuthu Raja was his replacement.)

Not satisfied with that, DMK launched Kalaignar TV to rival Sun TV. Sharad Kumar, a former Sun employee, was hired to run it. And Arasu Cable Corporation was formed to take on the Kalanithi-owned Sumangali Cable Vision.

The Marans patched up with their grand-uncle only before the 2009 general elections. It is believed that Stalin, who has been close to the brothers, and Selvi, Karunanidhi's daughter, brought about the reconciliation.

Dayanidhi again got the DMK ticket for Chennai Central, won and became the textile minister. 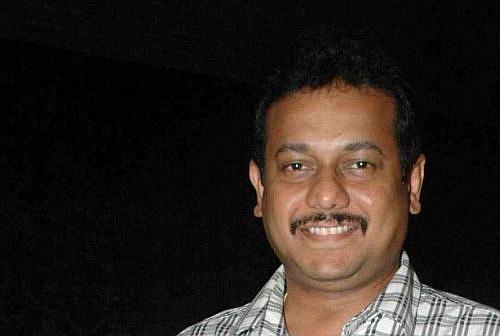 Kalanithi hasn't escaped the politics of vendetta that unfolds in Tamil Nadu after every regime change.

In June 2011, a month after AIADMK came back to power, nine cases, most of them related to cheating and intimidation, were filed against Sun Pictures and its then COO, Hansraj Saxena.

As a result, Saxena spent almost two months in police custody. Saxena was a part of the founding team of Sun TV and was known to be close to Kalanithi.

He inexplicably resigned from Sun Pictures in September 2011 and launched his own company called Sax Pictures and produced two films.

On December 17, 2012, Saxena, along with film distributor R Ayappan, lodged a police complaint against Kalanithi and other senior Sun functionaries. According to Saxena, Kalanithi has been avoiding him for almost one-and-a-half years for no reason.

"He had alleged that both of us [Saxena and Ayappan] were the ones who cheated, so I decided to quit," says he. Saxena next wants to start a film channel that will compete with Sun's KTV. 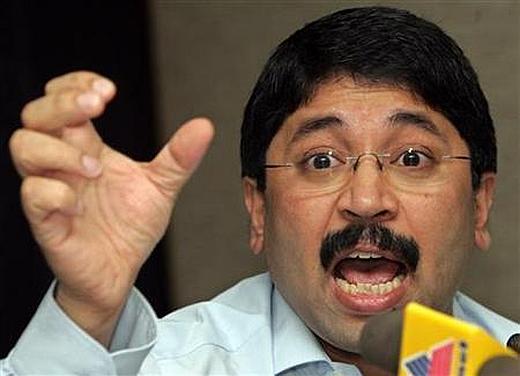 Controversies have chased Dayanidhi too. In New Delhi, unlike other Tamil Nadu politicians who only wear veshti and white shirt as some sort of political uniform, Dayanidhi would dress crisply like a business leader.

He would be Karunanidhi's mediator whenever he met Prime Minister Manmohan Singh or UPA Chairperson Sonia Gandhi in New Delhi.

He was instrumental in getting Bill Gates to Chennai to meet Karunanidhi in December 2005, though the DMK patriarch was out of power at that time.

A bombshell dropped on June 6, 2011 when maverick businessman C Sivasankaran, better known as Siva, came to the Central Bureau of Investigation headquarters in south Delhi and said that he had been forced to sell his telecom venture, Aircel, to Maxis in 2005 by the Maran brothers.

Dayanidhi refuted the allegations and told reporters in Chennai that Siva was a billionaire and "nobody can force anyone to sell his business".

Siva, he added, had put Aircel up for sale even before he became the telecom minister in May 2004. Still, in July 2011, Dayanidhi was dropped from the cabinet.

CBI, in its first information report filed in October 2011, alleged that Siva had got a call from Dayanidhi instructing him to "work with Maxis on the issue". 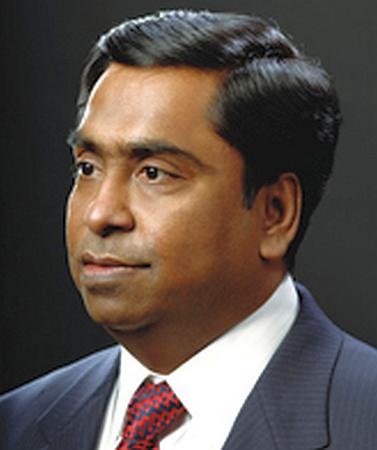 Subsequently, it added, Siva met Kalanithi in Chennai on November 11, 2005. In December, Siva announced that he was selling Aircel to Maxis.

That wasn't the end of the matter. It came to light that Astro All Asia Networks, a company related to Maxis, had invested Rs 629 crore (Rs 6.29 billion) in Sun Direct, the DTH arm of the Sun group.

This included a premium of Rs 549 crore (Rs 5.49 billion). During this time, Kalanithi and his wife, Kaveri, were issued shares at par.

CBI was of the opinion that at that time Sun Direct's value was around Rs 400 crore (Rs 4 billion).

In October 2011, Dayanidhi's home, also at Boat Club Road, was raided by CBI.