Sign in  |  Create a Rediffmail account
Rediff.com  » Business » 'US economy needs to improve for India to turn around'

'US economy needs to improve for India to turn around'

'The economy is sinking but no one is bothered'

Next
Indrani Roy in Kolkata

Veteran economist and former finance minister in the Jyoti Basu-led Left Front government, Ashok Mitra (bottom left), as he himself said, is "a disgruntled and cynical old man, an indifferent onlooker of many an unpleasant things".

“I don’t feel like meeting people and giving interviews.

"Those are useless exercises. I want to live my life in this book-covered cocoon,” Mitra told rediff.com’s Indrani Roy as she caught up with him at his Alipore Park Road residence to discuss the state of the Indian economy. 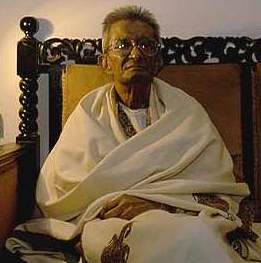 A former member of the Rajya Sabha and a former chairman of Parliament's standing committee on industry and commerce, Mitra (photographed here) spends his days amid books and huge photographs of (Karl) Marx, (Friedrich) Engels and (Vladimir Ilyich) Lenin that fill up almost each and every corner of his sprawling flat.

“My vision is blurred and I am really hard of hearing, yet my brain, ironically, is still very active,” Mitra said.

An excerpt from the interview:

A Rediff.com columnist recently wrote it will take more than three years for India to restart economic growth provided the new government, in all earnestness, brings in reforms right from the beginning. Do you agree?

I have no belief in speculation.

Over the past two decades, Indian economy has been vulnerable to external forces.

Unless the American economy improves drastically, I don’t see Indian economy turning for the better.

The gap in India’s balance of payments is frightening.

But, strangely, neither the corporates nor the politicians are bothered.

There is no restraint on imports.

The economy is sinking.

It’s a sad state of affairs.

Everybody is busy enjoying the high life, but no one stops to think, at what cost.

'Zero growth of employment is what rattles me the most'

The country's gross domestic product shows no signs of growing beyond the 4.5-5 per cent mark. What do you think the new government should do to change this?

The poor growth of GDP doesn’t rattle me as much as the lack of growth in employment.

As far as employment and social development are concerned, India’s score has been a big zero in the last few years.

There has been no improvement in the internal uplift of the country’s huge population.

So much could have been done.

Those in power are only busy protecting their or their party’s interests.

'Moily only protects the interests of the Ambanis'

Do you actually think we have entered an era of crony capitalism, as the former Delhi Chief Minister Arvind Kejriwal said recently?

Let me tell you: this statement by Mr Kejriwal is not very original. We (the Left) have been crying ourselves hoarse about it.

When I was involved in active politics, I could drop the names of members of Parliament who shamelessly protected the interests of some corporate families.

What do you think of (Minister of Petroleum and Natural Gas) Veerappa Moily?

He only looks after the interests of the Ambanis.

I have seen enough and witnessed too many bitter truths.

'Neither Congress nor BJP can bring down inflation'

What would be your advice for the new government to contain both inflation and curb fiscal deficit?

Everything depends on who comes to power.

If we consider the two major parties -- Congress and Bharatiya Janata Party -- they won’t be able to fight the two ills of the economy.

For, their basic ideology stems from capitalism and the latter can never bring down inflation and can never curb fiscal deficit.

Theory of capitalism evolves from the exploitation of the masses and any political party that exercises this maxim can never be beneficial for the society.

Perhaps, a well-orchestrated Left movement could have improved the situation somewhat.

But then they have weakened themselves in recent times and have lost the fizz.

They committed some grave tactical and ideological blunders to lose their political as well as economic importance.

'No one thought about achieving economic self-reliance'

How would you rate Finance Minister P Chidambaram?

(Smiles) He is just one of the endless series of politicians.

They don’t mean much.

I can’t make any distinction among them.

What, according to you, are the key economic mistakes that the present United Progressive Alliance made?

I think a blind chase for economic liberalisation spelt doom for the economy.

Post-(Jawharlal) Nehru, no one cared about economic self-reliance.

Murmurs of liberalisation that could be heard during Rajiv Gandhi’s time erupted into a loud roar when Manmohan Singh became the prime minister.

There was no going back on this thereafter.

'Manmohan Singh can only follow orders; he can't question'

With two acclaimed economists at the helm -- Prime Minister Manmohan Singh and Finance Minister P Chidambaram -- why do you think the duo could not solve India’s economic crisis?

As a person, I am very fond of Manmohan (Singh).

When I stepped down as the chief economic advisor to the Government of India, I had taken his name as my successor.

He is an astute economist, a profound analyst.

But as a prime minister, he is a misfit.

For, he took on his job as a typical civil servant.

He can only take orders, but can never challenge or ask questions.

He was chosen the leader of the country after much deliberations and it wasn’t a proper choice at all.

The day he steps down, I will call him and exchange pleasantries.

I am still very fond of him.

As for Chidambaram, I have already spoken my mind.

'Does Modi have the vision to rid India of economic woes?'

Many rating agencies and political analysts are of the opinion that things will look up if Narendra Modi becomes the next prime minister. Do you agree?

(Laughs) There can be no choice between two evils.

Before discussing this, we need to ask ourselves: does Modi have the vision to lift India up from the shore of economic despair?

It’s pointless to make such conjectures at the moment.

'Chidambaram won't be able to retain his Lok Sabha seat'

Do you think P Chidambaram’s desperate method of cutting Plan expenditure to adhere to the fiscal deficit target worsened the situation?

As someone who has spent years in active politics, I don’t want to talk about someone whose political life is about to end soon.

I shall be really surprised if Chidambaram manages to retain his Lok Sabha seat this time.

Remember, the last time he achieved a ‘rather shady’ win and this time I am certain of his loss.


Image: Balloons in the Indian Tricolour are popular with kids.
Photographs: Dharmadhyaksha/Wikimedia Commons

'No poltician wants to bring down inflation'

As a veteran economist, what would be your advice to fight the vexing issue of inflation?

No politician wants inflation to come down.

For, more inflation translates into more money for the politicians as well as the corporates.

Unless some political party in power implements and follows Nehru’s theory, that is, freedom from foreign capital, inflation will continue to plague the Indian economy.

Until there is a substantial growth in production, our economy just can’t improve.

Who do you think would be the fittest finance minister for India at the moment?

To be honest, none.

No one has the vision.

What are the main areas you would like the new finance minister to focus on?

There are no key areas as such.

One needs to have a strong intent of uprooting the old structure and remodel the economy based on self-reliance.

It means minimising the current account deficits of the balance of payments.

It’s time politicians started looking at the people of this country as human beings and not as ballot papers.