'I almost felt the weight of India on my shoulders' 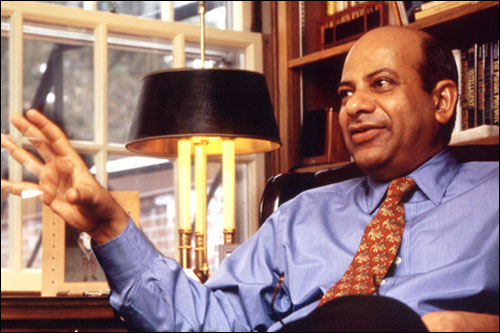 Vijay Govindarajan, a shy Harvard student who became one of America's most respected professors, speaks to Arthur J Pais about turning the traditional outlook on innovation on its head.


Arguing that the gap between rich nations and emerging economies is closing, the authors of Reverse Innovation: Create Far From Home, Win Everywhere set out to show that 'no longer will innovations traverse the globe in only one direction - from developed nations to developing ones.' Innovations will also flow in reverse, they show in their book, a bestseller on lists compiled by leading publications like The New York Times.

Authors Vijay Govindarajan and Chris Trimble of the Tuck School of Business at Dartmouth say their book is not aimed solely at the business world, for it celebrates innovations carried out with limited resources, be it in Thailand or India. It also explains where, when and why reverse innovation is on the rise, and why the implications are so profound - for nations, companies and individuals.

For Govindarajan, one of the most highly rated and admired professors on top American campuses, reverse innovation is a life lesson that began under the tutelage of his grandfather in a small Tamil Nadu town. He brought the lessons to the United States as a student and has incorporated it at every step of his career.

'I soon found America to be a true land of opportunity' 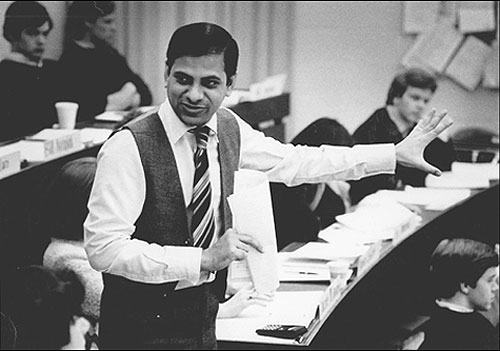 What are the highlights of your student life in America?

When I arrived in the US in 1974, it was quite a culture shock. Through some luck, I ended up at the Harvard Business School to do my MBA.

The pedagogy at HBS is case method. In India we are used to the lecture method, where the teacher gives the lecture. Students passively listen to the teacher and repeat the answers in exams. In the case method, you put your opinions to public scrutiny - 180 degrees different from what I was used to.

Being shy, I had not participated at all in the first few months of my MBA program. Then I looked around, my American friends were talking non-stop in class. There was a time in my student days, I wondered, 'How can I be so bad compared to my classmates? Perhaps when HBS decided to admit the 900th student, they admitted me.'

Then one day I was talking with a classmate of mine who I thought was very smart based on his class contributions. He told me, 'VG, I am lost. I am afraid I might flunk out.' Then I realised that every HBS student was insecure.

Complicating matters, I was and continue to be a vegetarian. I grew up on South Indian vegetarian food. Those days, being a vegetarian was much more difficult. I could only identify bread toast as vegetarian. I was sick of eating toast for breakfast, lunch, and dinner.

Though the initial adjustments were challenging, I soon found America to be a true land of opportunity. If you have talent and you are willing to work hard, the sky is the limit in this country.

As a student at HBS, I was exposed to great teaching and great teachers. That is what motivated me to become a teacher.


'I was the first Indian Dartmouth had hired' 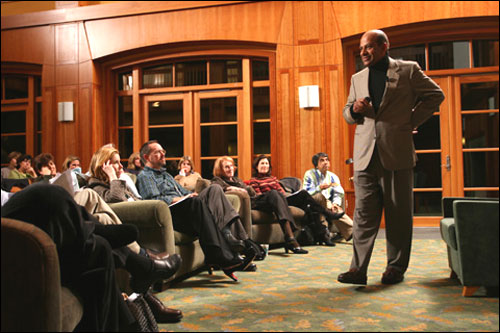 What is it you enjoy most as a teacher?

I am blessed to be on the faculty at the Tuck School at Dartmouth. There is nothing more enjoyable than teaching highly motivated, hard working, and an intelligent group of students. I learn from them as much as I teach them. Being a professor, I get a larger platform to address bigger issues.

A few years ago, GE's CEO Jeff Immelt asked me to be GE's first professor in residence and chief innovation consultant. I spent 24 months in GE. What an incredible experience! I got a front row seat to watch real people make real decisions in real life. As a direct result of that work, I co-authored a Harvard Business Review article with Immelt on reverse innovation. That led to the book on the same topic.

In the US, there is a close collaboration between industry and academics. I love that synergy.

Above all else, I enjoy research and writing. Every book is an interesting journey. I especially enjoyed writing Reverse Innovation. Growing up in India, I was firmly convinced that the only way we can solve India's problems is through innovation. Reverse Innovation has brought me full circle since it is about innovation in poor countries.

Her response was, 'VG, don't blow it. If you do a lousy job, they will never hire another Indian ever again.'

I almost felt the weight of India on my shoulders. I have been at Tuck for 27 years. Today, we have over 70 Indian students and six Indian faculty. For a small business school, we are very well represented.


'She did the opposite of what most married women do' 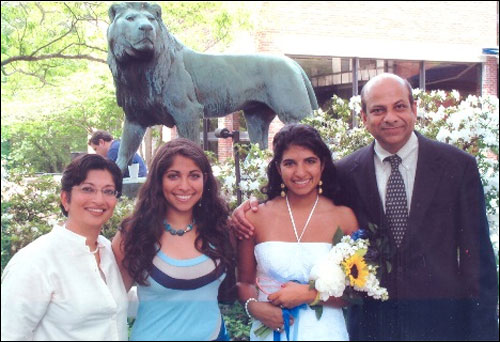 I married a fantastic person, Kirthi, in 1980. She has been my best friend for the past 32 years.

She was a gold medalist (in microbiology) from Bombay University. She got her MBA with distinction from Ohio State University. She was the chief of information and cost systems at VA Hospital until recently.

She did the opposite of what most married women do. She worked when our daughters were growing up. She left her job when our girls went to college. Our daughters need her more now. She keeps all of us anchored.

My older daughter, Tarunya, graduated from Dartmouth, worked for a few years in strategy consulting, got her MBA from Stanford, and currently works for a Silicon Valley start up in the education space.

My younger daughter, Pasy, graduated from USC and currently works on the brand team for Mr Potato Head in the toy and games company Hasbro. 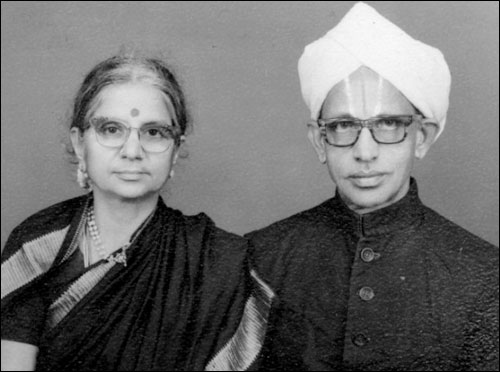 You teach at one America's best institutes; your book is published by Harvard. Yet you are not a product of a prestigious Indian school like the Indian Institute of Technology.

I was born and brought up at Annamalai Nagar and studied at Annamalai University... My parents had very modest means and couldn't afford to send me to better schools. But Harvard Business School picked me up because they knew I always had the extra incentive to do well.

You can be in small places, or you may chose to be in those small places for good reasons, but if you have the hunger to excel and succeed, you start on the right path.


'My grandfather had tremendous ambitions for me' 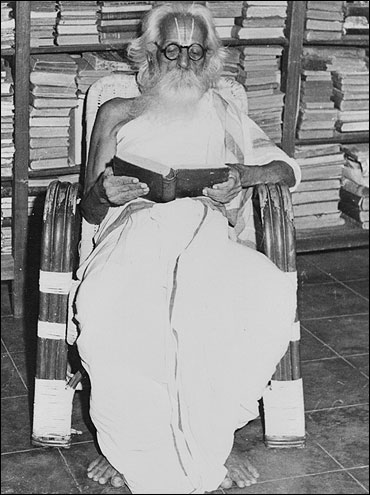 Who was the most influential figure in your younger years?

My paternal grandfather Krishnamacharia, who groomed me. The amount of ambition he had for me was unbelievable.

The Reverse Innovation book celebrates people who created something wonderful with limited resources and who can be examples to anyone anywhere. My grandfather, a traditional Brahmin who taught Dalit children voluntarily and without any fee... in Annamalai it is a great example

My grandfather had tremendous ambitions for me. For him I was a project. We were three brothers and a sister. But, somehow, he took to me and I don't know how many millions of hours he spent with me. As soon as I came from school, he would take my backpack and ask, 'What marks did you get in history today?' If I got 99 out of 100 marks, he would say you missed by one mark. You must now study. My mother would say, 'Let him drink some milk and then study.' But my grandfather insisted I study first.

He was a strict disciplinarian and not once did he say, 'I love you.' I didn't mind it because in India parents and grandparents are supposed to love their children and grandchildren. He never once said you did a great job. For him, it was always, 'You can do better!' I knew he was always proud of me. He was saying to me, 'You know VG you can push yourself; you can go to the next stage.'

'He put that man-on-the-moon ambition inside me' 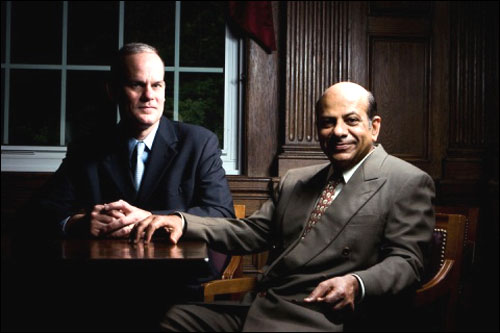 I always feel his presence. Even during this conversation with you he would say something like, 'You know your interview was good but these are three things you can do to improve yourself.'

He put that 'man-on-the-moon ambition' inside me — you must work harder, you must go to the best school, because you really can excel! When someone has so much ambition for you, you cannot let that person down.

When I was finishing fifth grade, he would get the syllabus of the sixth grade and we would work on it in the summer (the Indian academic year starts after summer). When all the other kids were playing, he would make me do math and science. He would get all the books that were not even required for the exams. He would say, for instance, in English, let's go to the original works of Shakespeare, and see what he says instead of reading only what the class teacher says. He would say, 'I'm teaching you now because I want to give you at least a 12-month advantage. I'm an old man, I may die any day.'

He was one of the secretaries under the maharaja of Mysore. My grandfather was originally from Bangalore. When my father took up a job at Annamalai University, my grandfather moved with him.

The interesting thing about my grandfather was that he was one of those people who were genuinely interested in creating value for society... Every Saturday and Sunday, in front of the Hindu temple, sitting under the banyan tree, he would teach all the untouchables (as they were called) from that area. He was very progressive. He never made any distinction between me and those kids. In fact, he would tell some of those kids, 'You know what, my grandson VG is good at solving this kind of math problem, why don't you ask him for help? Or, he would say to me, 'This character (kid) is very good is English, why don't you discuss this essay with him?'

He knew each of these people and their background. Many of them when they grew up came back to our village and became policemen, district collectors, professors. They would fall at my grandfather's feet for giving them that opportunity for coming up in life.

Reverse innovation to me is really at the heart of giving opportunity to the poor.