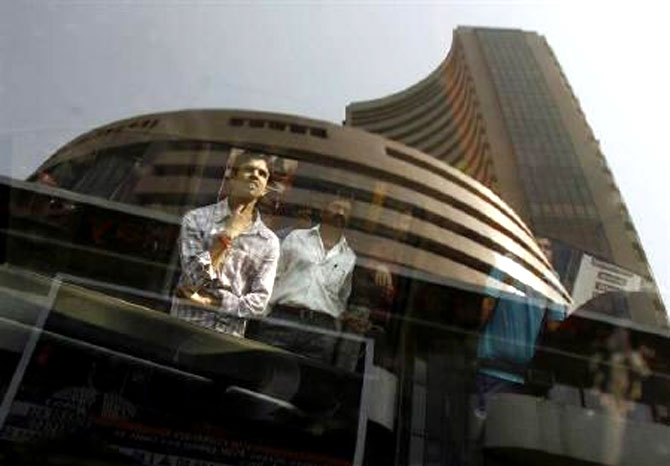 Further, IT majors continued to exhibit weakness amid profit taking after recent gains in the run up to the second quarter earnings.

Earlier in the day, the Sensex had touched a low of 20,590 while the Nifty slipped to a low of 6,117. The broader markets were marginally down with BSE Mid-cap and Small-cap indices down 0.03-0.3%.

The rupee is off highs on dollar bids from state-run banks for defence purchases of the government, other importers.

The unit closed at 61.66 per dollar on Tuesday. Weakness in stocks is also hurting the USD/INR pair, says a dealer.

Asian stock markets surrendered early gains on Wednesday on fears of tighter policy in China, while the dollar dropped after tepid US jobs data vanquished expectations that the Federal Reserve will taper its stimulus before next year.

Japan's Nikkei share average ended down 2% as a stronger yen took a heavy toll, after shares touched a 3-1/2 week high in the morning session.

MSCI's broadest index of Asia-Pacific shares outside Japan was down 0.4%, on track to post its first loss in five sessions, while profit-taking pushed Seoul shares off their highest level in more than 26 months.

BSE Realty index was the top loser among the sectoral indices on the BSE down 1.5% followed  Power, IT, Teck, Oil and Gas, Health Care and Auto indices, having lost 0.7-1.3%.

Profit taking was seen in IT majors after recent gains in the run up to the second quarter earnings.

Further, the appreciating rupee against the US dollar also dampened sentiment.

In the Sensex pack, Infosys, Wipro and TCS were down 0.5-4.5% each contributing the most to the losses. Other losers include, HDFC Bank, Sun Pharma,Tata Motors, BHEL, Tata Steel and ONGC down 1.4-2.4%.

Index heavyweight, Reliance Industries was down 0.8%.

Among other shares, Just Dial rallied 19% to Rs 1,144, on back of strong buying by the foreign institutional investors.

Jubilant Life Sciences surged 16% to Rs 88.75 on reports that the company may delist its equity shares from Indian bourses. Gitanjali Gems rallied 16.5% at Rs 64 on back of heavy volumes in an otherwise weak market.