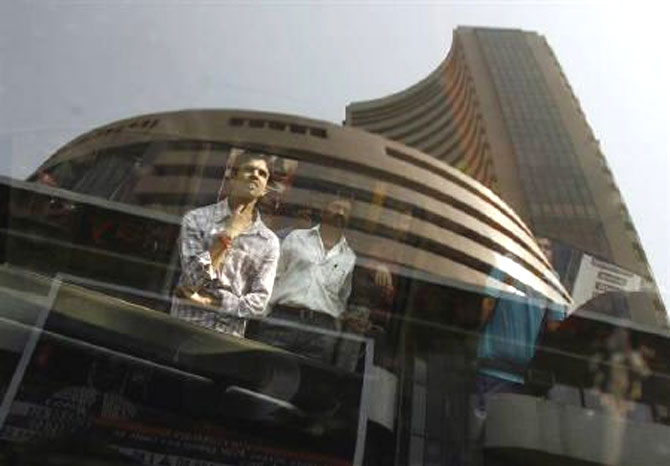 Markets ended at their lowest level in 10 weeks on Monday as weak economic data from China, the world's second largest economy, raised worries that the global growth is still struggling. Further, the US Fed's decision to further taper its monetary stimulus measures has also dampened sentiment in emerging markets.

The rupee turned marginally lower as state-run banks were seen buying dollars to likely to meet defence needs, foreign banks took cover ahead of RBI's reference rate setting.
The rupee is trading at 62.75 compared with its previous close of 62.68, after rising to 62.56 in early trades.

Stocks in Asia ended lower with trading holidays in some markets. Japan's benchmark share index the Nikkei dropped to a new 2-1/2 month low on Monday, extending losses for third straight day as investors remained cautious on weak economic data from China and ahead of the US jobs data. The Nikkei ended down 2% to 14,619. Singapore's Straits Times ended down 2.1% at 2,991. Stock markets in China, Hong Kong and Taiwan were closed on account of Lunar Year holidays.

BSE Metal index was the top loser among the sectoral indices down 3.3% at 8,849. The Metal Index ended below 9000 the lowest since October 28, 2013. Realty, Bankex, IT, AUto, Capital Goods, Oil and gas indices ended down 1-2% each. However, Healthcare index was the sole gainer up 1%.

Metal shares were down after official data released by China on Saturday showed that the country's factory growth in January eased to six-month low at 50.5 from 51 in December. Tata Steel, Hindalco, Sesa Sterlite, JSW Steel ended down 1.5-6% each. Further, even the services index witnessed a decline. The official non-manufacturing Purchasing Managers' Index (PMI) eased to 53.4 in January from 54.6 in December.

IT majors TCS and Infosys ended down 1.8% each on account of profit taking at higher levels.

Shares of mobile phone service providers such as Bharti Airtel, Reliance Comm and Idea ended down 1-3% each on worries that aggressive bidding for the 900-MHz bandwidth with the entry of Reliance Jio would lead to higher costs for retaining the spectrum.

Share of four-wheeler majors such as Tata Motors, Maruti Suzuki and Mahindra & Mahindra were down 0.5-3% each after they reported disappointing January sales on Saturday.

Other shares which contributed to the Sensex decline include ICICI Bank and FMCG major ITC.

Among other shares, TVS Motor ended up nearly 3% at Rs 79.50 after the company reported strong export growth in January. TVS Motor Company's total exports surged 39% to 28,875 units in January 2014 over January 2013.

In the broader market, the BSE Mid-cap index ended down 0.9% while BSE Small-cap index eased 0.5%.