Markets have an upbeat closing 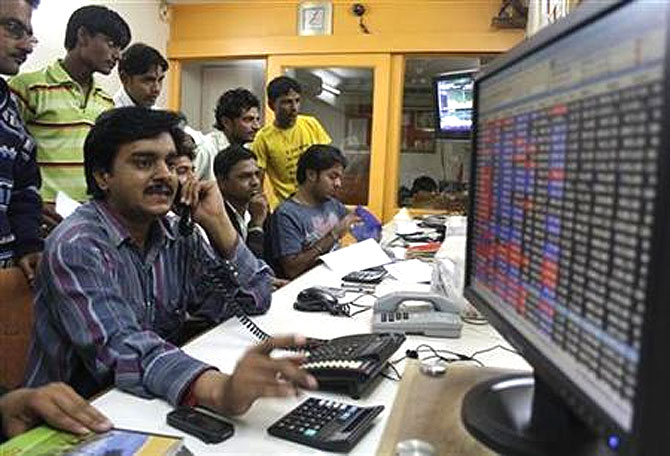 The markets resumed their election-led euphoria, after the brief interlude in the past three trading sessions, led by secular buying in index heavyweights and a rebound in the hitherto-beaten IT stocks.

The statement by global credit rating agency Standard & Poor's that it may upgrade India's rating outlook if the government that is elected next month addresses some of the country's fiscal and economic challenges through steps such as passing a goods and services tax, may have contributed to the optimism.

The markets had a weak session on Wednesday to make it three-in-a-row and mark their lowest close in 2-1/2 weeks as IT, realty and infrastructure stocks succumbed to profit taking.

The day's market proceedings had started on a tentative note, possibly a result of the overhang of the previous session's decline.

But gains in Asian stocks and an overnight rally in US stocks seemed to have underpinned sentiment on the domestic bourses through the course of the day.

The Asian shares crept higher on Thursday after the US industrial production increased more than forecast in March and dovish comments from the head of the US Federal Reserve lifted Wall Street.

However, European stocks dipped in early trades as disappointing earnings from US tech heavyweights Google and IBM dampened the previous session's upbeat tone on Wall Street, and the dollar weakened on dovish remarks from the Federal Reserve.

The stock market has a long weekend ahead as the markets are closed on April 18 due to Good Friday.

Hindalco shone bright with gains of 4.4% at Rs 141 to top the gainer's charts on the BSE. The high-beta auto and banking counters also saw a lot of action.

In the broader stock universe, HCL Technologies ended 1% higher at 1,424 on the BSE after the company reported a better-than-expected 8.5% sequential growth in consolidated net profit at Rs 1,624 crore for the third quarter ended March 31, 2014 (Q3), helped by increasing demand for outsourcing services.

The Noida-based firm had posted a net profit of Rs 1,021 crore in the corresponding quarter of last fiscal (2012-13).

The shares of tyre companies were on a roll, racing ahead by upto 8%, accompanied by heavy volumes, on expectations of higher revenue growth during the current fiscal.

On the other hand, HDFC Bank shed 1% at Rs 719 in an otherwise firm market on reports that MSCI has further reduced the weightage of the bank in MSCI India Index.

MSCI has cut the weightage as foreign shareholding in HDFC Bank has exceeded the permissible limit.

The market breadth was strong.