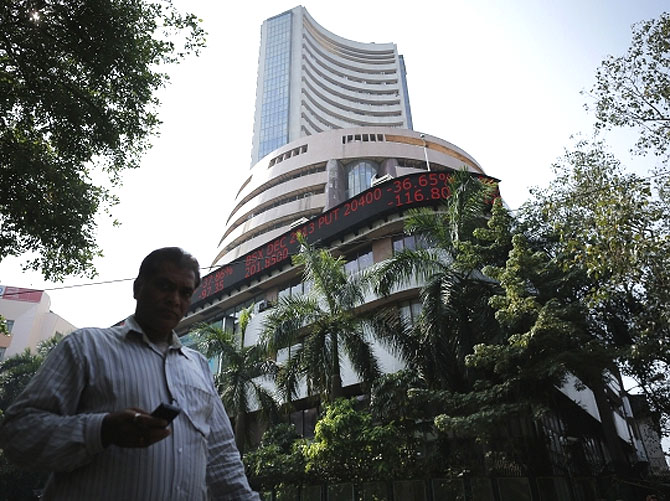 Markets recouped from their day's lows in late trades to end at fresh record closing highs on hopes that the Finance Minister Arun Jaitley in his maiden Budget next week would announce reforms to revive economic growth.

Meanwhile, both the benchmark indices gained over 3% during the week ended July 4.

The Indian rupee came off its highs and was trading nearly unchanged at Rs 59.74 compared to its previous close of Rs 59.73 to the dollar after the Reserve Bank of India stepped up dollar purchases while subdued domestic stock market also weighed on sentiment.

Asian markets witnessed profit taking after hitting three-year high on Friday on the back of encouraging economic data from the US signalling an uptick in the world's largest economy.

Among other shares in the region, Shanghai Composite ended down 0.2%, Hang Seng gained 0.1% and Straits Times ended flat with negative bias.

European shares witnessed profit booking after recent gains and were trading marginally lower with CAC-40, DAX and FTSE down 0.1-0.2% each.

BSE Oil and Gas index was the top sectoral gainer up 1.7% followed by Power, Realty, Bankex, FMCG and Healthcare indices.

Bharti Airtel came off its day's highs and ended up 0.3% after the Reserve Bank increased limit for overseas investors to buy shares in the company.

Larsen & Toubro ended 0.6% lower contributing the most to the Sensex decline.

TCS, Wipro, Sesa Sterlite which had gained in the previous sessions witnessed profit taking and ended down.

Among other shares, Amtek Auto has dipped 3.7% to end at Rs 242 after Citigroup sold over two million shares worth Rs 53 crore of the company through open market.

On July 3, 2014 Citigroup Global Markets Mauritius Private Limited has sold 2.07 million shares representing 0.95% of total equity of Amtek Auto at a price of Rs 255.93 per share on NSE, the bulk deal data shows.

Jain Irrigation Systems ended up 5% at Rs 127 after the company said it has been issued a Letter of Intent for project by Himachal Pradesh (HP) government involving an outlay of approximately Rs 100 crore.

Cox and Kings ended up 10% at Rs 267 extending its past four day’s rally on the Bombay Stock Exchange.

Analyst at KRChoksey Research recommended ‘buy’ rating on the stock with a target price of Rs 289 per share.

Railway-related stocks ended higher by up to 8% ahead of the Railway Budget on Tuesday, July 8.

In the broader market, the BSE Mid-cap and Small-cap indices ended up 0.6-0.8% each.