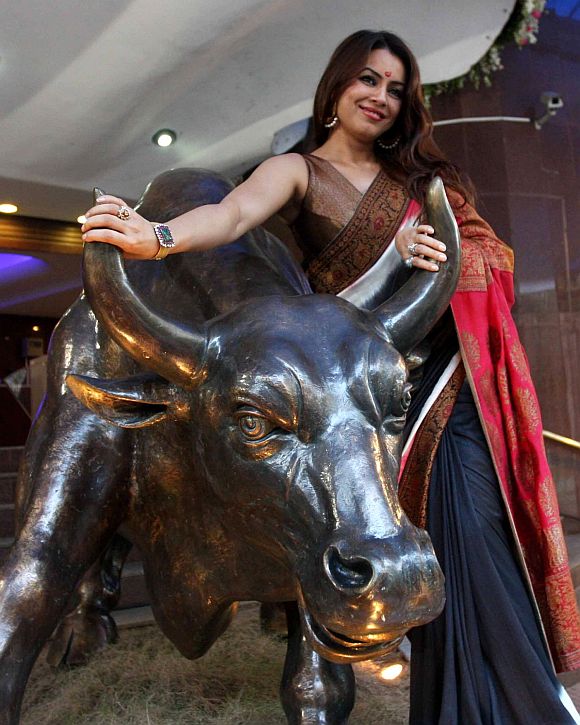 Image: There is a lot of action in the broader market space for the second day in a row.
Photographs: Abhijit Mhamunkar/Rediff

The broader markets outperformed the benchmark indices- BSE Midcap and Smallcap indices surged between 2-3 per cent.

The market breadth in BSE ended firm with 2,140 shares advancing and 747 shares declining.

According to Chandan Taparia, Derivative Analyst, Anand Rathi Financial Services, “After the strong run up now market is taking a pause and hovering near to 7300 levels. Option concentration scattered at different strikes as participants initiated strategies by using different strikes. Maximum put open interest is at 7000 strike and now that is likely to act as a major medium term support base. Nifty is up by around 6 per cent in this series and higher from its monthly vwap - volume weight age average of 7025 levels. So if manages to hold then towards the expiry week short covering move may take it to higher levels. Nifty spot has immediate support at around 7130 then 7080 & 7000, on upside hurdle at 7350 then 7450 to 7500 zone.”

Asian shares slipped on Tuesday despite a solid performance on Wall Street, while the dollar wallowed close to its lowest level against the yen in more than three months.

MSCI's broadest index of Asia-Pacific shares outside Japan slipped about 0.3 per cent. But Japan's benchmark Nikkei stock average bucked the downtrend and tracked overnight gains on Wall Street, ending up 0.5 per cent and breaking a four-session losing streak.

European shares which had earlier opened higher on expectation of easy monetary policies from the European Central Bank pared gains and were trading with marginal losses as investors turned cautious and booked profits. The CAC, DAX and FTSE were down 0.3-0.5 per cent each.

The rupee fell to 58.70 versus its previous close of 58.59/60, en route to snapping a four-session winning streak, as a large state-owned bank is said to be buying dollars to meet demand for oil companies.

BSE Realty index zoomed nearly 5 per cent followed by counters like Consumer Durables, Metal, IT, Healthcare and Power, all gaining between 1-2 per cent. BSE Oil & Gas and BSE Bankex slipped between 1-3 per cent.

Real estate and infrastructure company shares rallied by up to 20 per cent on the back of heavy volumes on expectations of change in policy environment.

Shares of metal companies ended firm with the S&P BSE Metal Index hitting a two-year high today. In past three trading sessions, the index has rallied 10 per cent as against 2 per cent rise in benchmark index.

Stocks of consumer durables goods seem to be on the investors' radar on hopes of an uptick in demand with the BJP-led NDA government promising to unveil reforms to boost economic growth.

Tata Communications rallied nearly 10 per cent to Rs 334 after the company said it has sealed a deal to sell its 67.3 per cent stake in Neotel, its South African unit, for seven billion rand (Rs 3,950 crore) to Vodacom, a subsidiary of British telecom company Vodafone.

IT exporters firmed up after the rupee weakened against the US dollar. A depreciating rupee augurs well for these companies as over 80 per cent of their revenues come from exports to the US. Infosys, TCS and Wipro gained 1-3 per cent contributing the most to the Sensex gains.

BHEL recovered from its early lows and ended up 3 per cent.

Index heavyweights, ITC, HDFC were up 1-2 per cent each.

In the oil sector, Reliance Industries and ONGC which had gained sharply in the previous few sessions witnessed profit and were both down over 3 per cent each.

On the losing side, Coal India shares, which rose 13 per cent yesterday, ended lower by 6.5 per cent, while ONGC slipped 4 per cent after gaining 8.5 per cent on Monday.