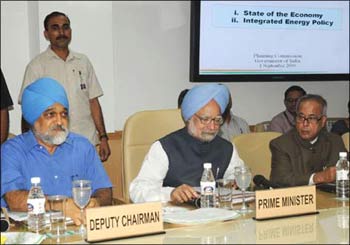 Prime Minister Manmohan Singh said on Tuesday the global economic downturn which had affected Indian economy as well, is now coming to an end with slow return to normalcy.

"We have been through a difficult year because of the global economic downturn which is only now coming to end with a slow return to normalcy in the months that lie ahead," Singh said in his opening remarks chairing the meeting of the full Planning Commission, which is assessing the economy and status of Integrated Energy Policy. 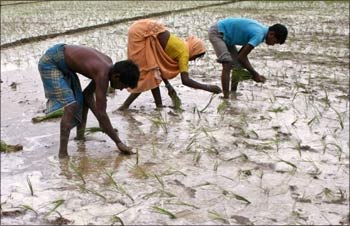 "The country has also seen poor monsoon," the prime minister said, adding it would be useful for the Planning Commission to present its assessment of the overall economic situation.

Besides, members of the Planning Commission and its Deputy Chairman Montek Singh Ahluwalia, the first meeting of the full panel in the second term of United Progressive Alliance government is being attended by more than a dozen ministers including Finance Minister Pranab Mukherjee, Agriculture Minister Sharad Pawar and Home Minister P Chidambaram.

Facing the ripple effects of global financial crisis, India's economic growth slipped to 6.7 per cent in 2008-09 from about 9 per cent in the previous fiscal. The growth, according to the Planning Commission, is expected to fall further to 6.3 per cent in 2009-10. 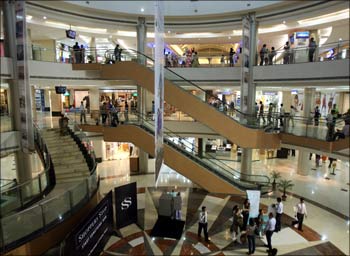 The review of the economy, Singh said, was important 'not only because we are starting the second term of the United Progressive Alliance government, but also because we are exactly at the mid-point of the Eleventh Five Year Plan (2007-12)'.

Singh also underlined the need for rational energy policies saying 'energy is vital for our economic growth and this is the area where we are a deficit economy. We import over 70 per cent of our petroleum energy needs and are also moving to a deficit position in coal'. 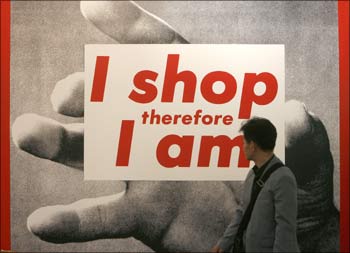 Image: A man looks at a sign 'I shop, therefore I am', highlighting American consumerism.
Photographs: Arnd Wiegmann/Reuters

Rational energy policies, the prime minister added, were also critical for rational responses to the threat of climate change.

"This is a new compulsion and we need to asses whether we are on track in critical aspects of our energy policies," he said.

Noting that there is no symmetry in energy policies as different segments are under different ministries, Singh said, "IEP... approved by the Cabinet in December 2008 contained a number of recommendations covering different sub-sectors. . . it would be useful for the Planning Commission to present an assessment on how these recommendations have been implemented."