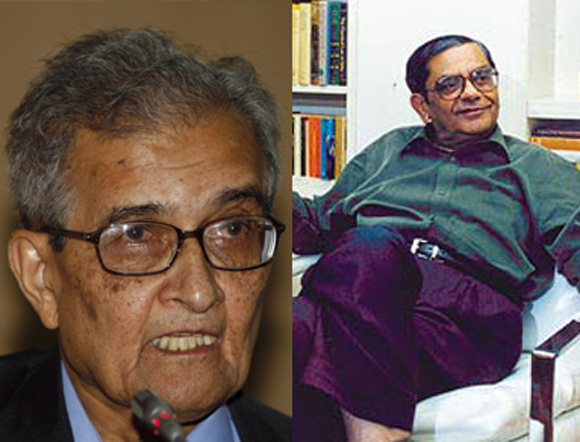 Unseemly as the exchange between Bhagwati-Sen has been, it nevertheless highlights the polar opposition between the proponents of GDPism and those who believe that what ultimately matters is social progress and people’s welfare, says Praful Bidwai.

Jagdish Natwarlal Bhagwati, professor of economics at Columbia University in New York, isn’t known for modesty or patience towards his critics. In 2004, he got a chair created in Indian political economy at Columbia, named after himself. As if this wasn’t unusual enough, the chair’s occupant is none other than Arvind Panagariya, Bhagwati’s co-author.

Even more weird, in 2010, Bhagwati also had a fellowship named after himself set up at the Columbia Law School to coincide with the creation of a chair named after its illustrious alumnus, BR Ambedkar.

Unlike the political economy chair, which was funded by private donors, the Bhagwati fellowship is financed by the Indian taxpayer. Bhagwati and Panagariya are dyed-in-the-wool neo-liberals and apologists for the Washington Consensus, or the now-discredited policy package of liberalisation, privatisation and globalisation.

Bhagwati has famously championed free (as opposed to fair) trade as the key to development. Panagariya has been chief economist at the Asian Development Bank, and an adviser to the World Bank and International Monetary Fund. Both root for “second-generation” neo-liberal “reforms” and oppose food security, employment guarantee and other welfare measures. 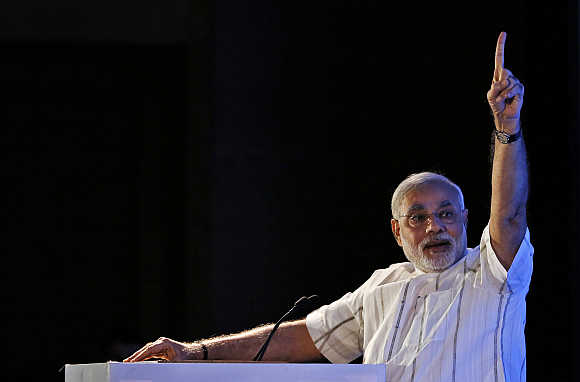 Self-promotion aside, Bhagwati relishes ridiculing those who disagree with him, in particular Nobel Laureate Amartya Sen. Bhagwati’s books, including the latest Why Growth Matters, co-authored with Panagariya, are replete with vicious comments on Sen. For years Bhagwati would throw a party each time Sen missed the Nobel Prize, which he finally got in 1998. He often gave a call for a second “Swadeshi” movement -- making a bonfire of India’s industrial regulations -- with not the faintest recognition of the irony of doing so from distant shores.

So nobody expected Bhagwati to be sober in his criticism of Jean Dreze and Sen’s new book An Uncertain Glory: India and Its Contradictions. But not many thought he would stoop to launching a series of abusive personal attacks on Sen. Panagariya duly amplified these. Sen responded with reasoned arguments, largely without mentioning Bhagwati.

Besides the Dreze-Sen book, what seems to have provoked Bhagwati’s malicious broadsides is Sen’s qualified defence of the Food Security Bill, his endorsement of Bihar Chief Minister Nitish Kumar’s social welfare measures, his criticism of the “Gujarat model” of development, and his statement that he wouldn’t vote for Narendra Modi as prime minister. The last brought on the hysterical demand that Sen return the Bharat Ratna. 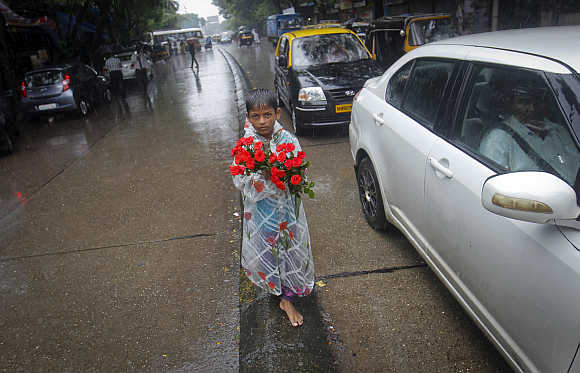 Image: A boy sells flowers during the monsoon in Mumbai to eke out a living
Photographs: Danish Siddiqui/Reuters

The debate has since spilled over into the pages of the Economist magazine. Many have described this exchange as a shouting match or slugfest. But the aggression comes from one side, with Bhagwati unfairly accusing Sen of being anti-growth and claiming he pioneered work on equity, gender issues, etc -- something nobody remembers Bhagwati for, unlike for trade theory.

Unseemly as the exchange has been, it nevertheless highlights the polar opposition between the proponents of GDPism, or worship of GDP growth as an end in itself, and those who believe that what ultimately matters is social progress and people’s welfare, and this requires more than just growth. The GDPists are obsessed with reviving India’s faltering “growth story”, no matter what the cost, including bleeding the exchequer, and mindless deregulation and privatisation.

The GDPists’ critics are on a strong wicket and can cite India’s own experience over the last two decades, the fastest-growth period in recent history, if not ever. This has seen very little improvement in the reduction of poverty, deprivation, income inequalities and regional disparities, or in the standard of living of a majority of the people -- the real measures of progress.

Social progress requires not just growth, but balanced growth with equitable distribution. India’s growth is remarkably unbalanced, with the services sector growing rapidly, industry growing too sluggishly to absorb labour, and agriculture -- on which 60 per cent of the population depends -- annually growing at barely two per cent, and its share in GDP falling to a low 16-17 per cent. Recent growth has wrought enormous environmental destruction and degradation in India. 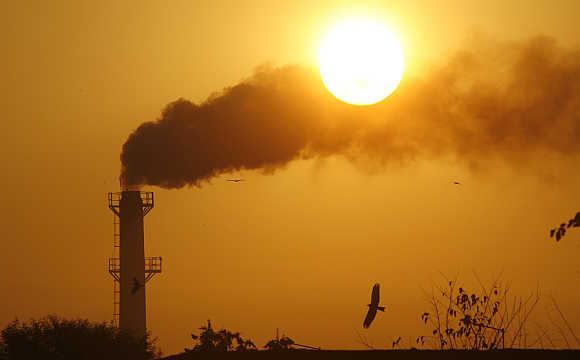 Image: Smoke rises from a chimney of a garbage processing plant on the outskirts of Chandigarh.
Photographs: Ajay Verma/Reuters

In a just-released report commissioned by the Indian government, the World Bank estimates that damage from environmental degradation annually amounts to Rs 3.75 lakh crores or a horrific 5.7 per cent of GDP. This shaves off almost all of the six per cent per capita growth and fully three-fourths of the GDP increase recorded between 2000-01 and 2010-11.

Twenty-nine per cent of this comes from outdoor pollution alone, which kills 1.16 lakh people every year. Next come indoor air pollution (23 per cent of total damage), cropland degradation (19 per cent) water supply and sanitation (14 per cent), pasture (11 per cent) and forest degradation (four per cent). Almost a quarter of India’s child deaths can be attributed to inadequate availability of clean water and sanitation, itself related to environmental degradation.

Income disparities are growing at an obscene pace in India. The latest National Sample Survey figures show that the per capita spending of the richest five per cent of urban Indians in 2011-12 was 15 times higher than that of the poorest five per cent. Twelve years ago, the ratio was 12. In rural India, the top-bottom disparity grew from seven to nine multiples. 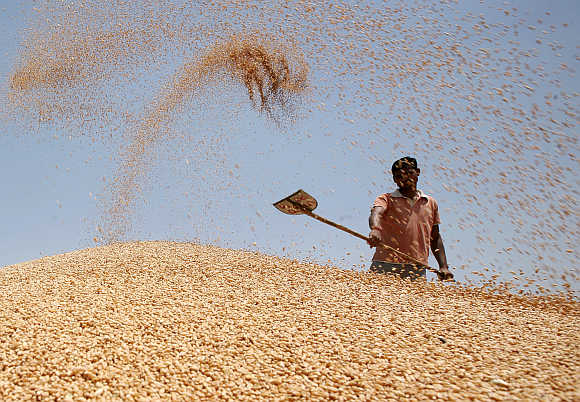 Image: A labourer shovels wheat at a wholesale grain market on the outskirts of Amritsar.
Photographs: Munish Sharma/Reuters

The spending of the top 10 per cent has grown over 12 years by about 60 per cent, but that of the bottom one-tenth by 30 per cent. Even assuming that the latest Planning Commission estimates of poverty reduction -- which very few people find credible -- are correct, the annual pace of decrease is just 2.2 per cent, a fraction of the 7.6 per cent GDP growth. This means there’s no “trickle down” to the poorest people. Rather, the growth process has enriched the already affluent.

The Bhagwatis of the world have no answer as to how this growth process, into which imbalances and disparities are built deeply and structurally, can reduce them by itself, without State intervention. The Bhagwati-Panagariya book contains no serious analysis of the qualitative or distributive aspects of growth. It merely regurgitates shop-worn GDPist cliches.

Bhagwati and Panagariya abuse Sen as a sort of misguided “Mother Teresa of economics”. “But she did a lot of good at the micro level”, whereas Sen’s policy prescriptions have done “huge damage”. They rail against food subsidies for the poor, amounting to less than Rs 1 lakh crores (Rs 1 trillion), as a “fiscal threat” and a waste of money, but have nothing to say about India’s much larger fuel subsidy bill or the giveaways of over Rs 5 lakh crores (Rs 5 trillion) to the rich in budget after budget. 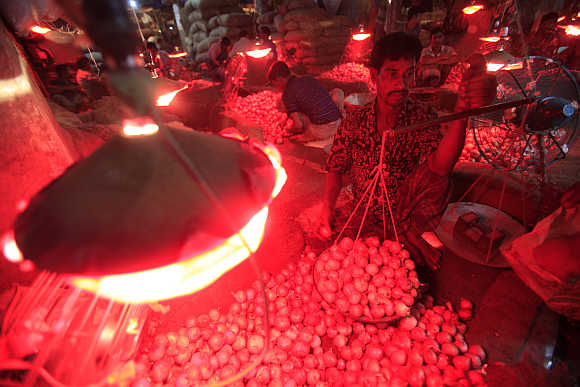 By contrast, Dreze and Sen lay out a persuasive case for State intervention in their sober (and sobering) discussion of India’s dismal human development performance -- in healthcare, literacy, education, poverty reduction, social assistance, food security, and so on. They aim at “integrating growth with development” within a firmly democratic and participatory framework.

They highlight India’s many persistent social pathologies. Thus, 43 per cent of Indian children under five remain undernourished, and 48 per cent remain stunted. Almost half of Indian women of childbearing age are anaemic. These ratios have remained unchanged over two decades. As has the proportion of Indians who defecate in the open -- still over 50 per cent.

Even more telling, India, despite its high growth rate, remains a social development laggard in all of South Asia barring Pakistan. The contrast with Bangladesh is revealing. Bangladesh’s per capita income is half that of India’s. But Bangladesh has overtaken India in life expectancy (four years higher), infant mortality decrease (25 per cent lower), and child immunisation (82 vs 44 per cent).

As Dreze and Sen show, India performs disgracefully even in comparison to the world’s poorest 16 countries outside sub-Saharan Africa. It ranks as low as 11 (literacy), 13 (improved sanitation) and 15 (underweight children). India, quite simply, is a disaster zone -- little islands of California amidst a sea of unrelieved social deprivation, economic bondage and human misery. 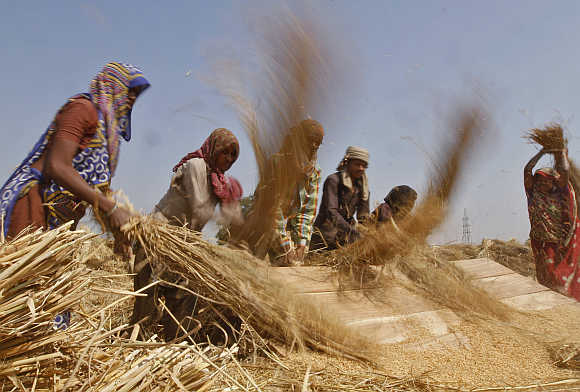 India needs to do much, much more in the social sector. Take the Asian context. In Asia’s other 18 lower-middle income countries, spending on social insurance, social assistance, and labour market programmes averages 3.4 per cent of GDP. India’s spending is one-half of this, at 1.7 per cent -- and just one-fifth that of Asia’s high-income countries. Even that low level is reached largely because of NREGA.

Dreze and Sen powerfully argue for a series of corrective measures to empower the poor and enhance their capabilities. They address not just economic matters, but issues such as accountability and corruption, ethics, public reasoning about equality and justice, and the opportunities for change made available by India’s relatively robust democracy despite all its faults.

One wishes Dreze and Sen had delved deeper into the root-causes of India’s social development failures -- such as class, caste and gender biases, themselves embedded in India’s severely unequal society, our policymakers’ elitist inclinations, the misanthropic nature of the ruling classes, recent distortions in public discourse, and increasing demonisation and repression of popular protests. Dreze and Sen’s passionate concern with these questions is expressed in the book’s final chapter, aptly entitled The Need for Impatience.

This sums up what we must do -- become intolerant of our policymakers’ indifference and inaction on justice and equality, and mobilise social energies on these vital issues.