Next
Ritu Jha in California

When Khosla bought the Martin’s beach property he put up a gate with a sign that said, ‘Beach closed, keep out.’ Ritu Jha reports from California. 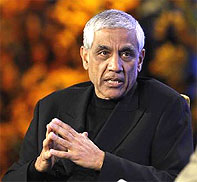 Vinod Khosla, the Silicon Valley billionaire and co-founder, Sun Microsystem, has been involved in a series of legal battles ever since he blocked access to Martin’s beach in California’s Half Moon Bay after buying the property for $37.5 million.

Hill said the Bill would require the State Lands Commission to enter into negotiations with the landowner (Khosla) to reopen the road for public access.

If a settlement can’t be reached by January 1, 2016, the legislation would direct the commission to acquire the road for public access.

“I introduced Senate Bill 968 to try to provide a pathway for compromise so the public can once again access Martin’s Beach,” Hill told Rediff.com.


Image: A Bill to restore public access to the beach has been introduced in the California Senate.
Photographs: Sergio Moraes/Reuters

He said the road to the beach had been closed since 2008, and it might remain shut in future as legal battles play out in the courts.

“The California Coastal Act envisioned this delicate balancing act between maximising public access to the coast while protecting the rights of private property owners,” he added. “This Bill tries to bring the landowner (or the landowner’s representatives) to the table to reach a compromise.”

According to a statement issued by Hill, the property was previously owned for over a century by the Denney family, which charged visitors $5 for access and parking at the beach.

When Khosla bought the property he put up a gate with a sign that said, ‘Beach closed, keep out.’


Image: A surfer heads to a surfing spot at Martin's Beach, a popular surfing and fishing spot, in Half Moon Bay, California.
Photographs: Robert Galbraith/Reuters

A group of protesting surfers known as Martin’s 5 were arrested for trespassing and walking down the access road to the beach and going surfing.

Attorney Gary Redenbacher, representing Friends of Martin’s Beach, filed a lawsuit to restore public access to the beach and based his claim on the public trust doctrine and Article 10, Section 4, of the state constitution, which prevents property owners from excluding access to public water bodies.

Surfrider Foundation, another non-profit, grassroots organisation dedicated to the protection of the world’s oceans, is pressing its own lawsuit against Khosla based primarily on the California Coastal Act.

The case, scheduled to go to court in May, contends Khosla failed to obtain a coastal development permit for the new gate and restrictive signs that prevent the public from accessing the beach.

Mike Wallace, a volunteer at Surfrider Foundation and a long time surfer at the beach, told Rediff.com, “Families have for generations gone to the beach, whether it is on the 4th of July or holiday picnics, now they can’t do that.”

The organisation sent a registered letter to Khosla to find a way out, but he did not respond, Wallace added.

Michale Roberts, who is supporting Senator Hill’s Bill, asked, “Why should a billionaire restrict access to a beach that had been used for surfing for hundreds of years?  We just want access to the coastline.”

E-mails and phone calls to Khosla’s attorney were not returned.