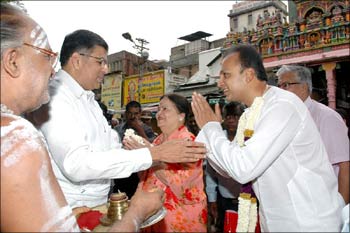 As the wrangle over the energy deal continues between Ambani brothers, younger brother Anil Ambani has opted to go on a religious tour of South India.

Anil and his mother Kokilaben visited the Meenakshi Temple in Madurai and offered prayers to Goddess Meenakshi and Lord Sundareswarar.

They also visited the temple town of Rameshwaram, on Sunday. 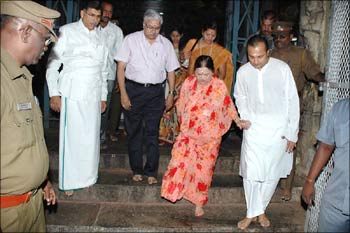 Top Indian conglomerate Reliance Industries, headed by billionaire Mukesh Ambani, and Reliance Natural Resources Ltd, led by Anil Ambani, have crossed swords over the terms of a gas-supply agreement struck when the Reliance empire was split in 2005.

The latest tussle stems from the 2005 break-up of the Reliance empire after their father Dhirubhai Ambani's death. It has raised concerns of discouraging investment in India's gas sector even as the country scrambles to shore up its energy security. In April, Reliance Industries started pumping natural gas from its massive deep-sea field in the Bay of Bengal, which at full throttle will nearly double India's gas output.

Earlier, on Saturday, the Ambanis visited the Lord Krishna Guruvayur Temple in Kerala.