'Air India should be sold, but I've been asked to keep it going' 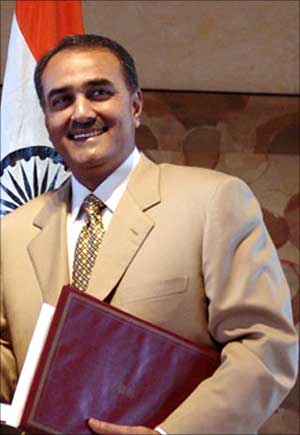 As the new Chairman and Managing Director Arvind Jhadav tries to put together a rescue package, fingers have been pointed at Civil Aviation Minister Praful Patel for several decisions in his last five years as minister that allegedly damaged the struggling airline's competitive position. In an interview with senior editors of Business Standard, Patel discusses the airline's problems and defends his record.

What do you think led to the financial crisis at Air India?

Air India has never operated smoothly. Its history shows that it has run well for some time and then again fallen. The reasons that dog the airline are the high cost of manpower and inefficiencies inherently built into the organisation, coupled with external factors like the slowdown. There are around 1,600 people who earn salaries of above Rs 25 lakh (Rs 2.5 million) and more annually in the airline.

How do you justify the airline's ambitious aircraft acquisition plan in 2004?

An attempt was made by the earlier government in 2003 to sell Air India, which did not fructify because Tata-Singapore International Airlines backed off. In 2004, when we took over, A-I was shrinking and it had only 23 aircraft.

Indian Airlines was better off. They initially came to us with an order for 24 aircraft. Air India was asked to revisit its order, considering that the market was looking up and we were starting Air India Express. 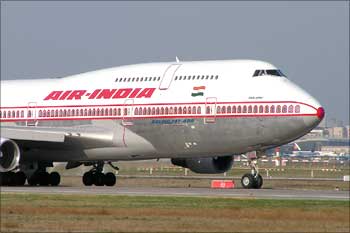 It seems bizarre that a business with a top line of Rs 16,000 crore (Rs 160 billion) should go in for capex of over Rs 40,000 crore (Rs 400 billion) to buy planes. How was it justified? Was there a financing plan in place, considering the low equity capital base? On the surface, it would look like a recipe for disaster.

This was always discussed in the government, that we cannot do business of this size without equity infusion. A very unfortunate part of government functioning is that we do not look at every aspect in one go. We decided in 2006 that we will come out with an Initial Public Offering to bring in money for Air India. But that could not happen.

On the one hand, you were creating competition for Air India by offering liberal bilateral terms. On the other, you ordered more planes for Air India, but give it no money to finance the planes. You take the three decisions together and the airline has to die.

No, I do not agree. Do not link one, two and three together. Bilateral, by definition, means it is two-way. If any airline can come to India, any Indian airline can also go out to that particular destination. And bilaterals are decided by an inter-ministerial group, including the ministry of external affairs, not by the civil aviation ministry.

For instance, we were told to give more bilaterals to Qatar because we had signed a gas agreement with them.

'Do not see me as a minister for Air India' 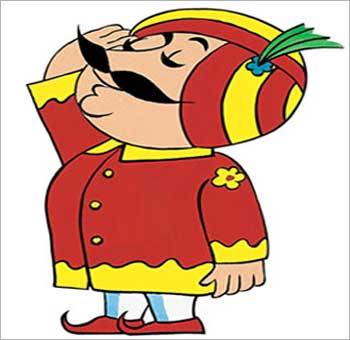 But you are giving bilaterals to carriers who do not have any domestic operation. Now, they are treating India as their domestic market and doing a hub-and-spoke operation for onward travel. In that way you are killing the domestic airlines' business.

I do not agree with that. All airlines put together in India, do they have the ability to meet the requirement of the country today?

If you take one decision, like buying more planes, you can have a rationale for that. But if you take the three decisions together, the only outcome can be disaster.

No, I do not agree. My point is, does Indian aviation need to grow... Do not see me as a minister for Air India.

We agree, but then why do you ask the airline to buy more planes, and after that not finance such a large acquisition?

That is where I totally agree with you, that the airline needed money. But then the question is, do they not need more planes to stay in the market? Only 50 planes have come so far, and you can always defer the delivery and there will not be any cost involved. We can work that out.

'I am not authorised to select the board' 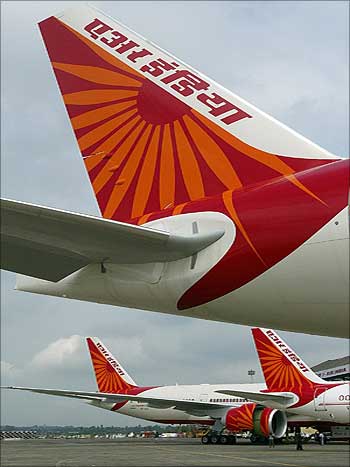 Why did you not scale back the order when you decided not to come out with the IPO and it was clear that paying for the aircraft would be a problem?

The IPO issue is different. The analysts said the airline would not get a proper valuation because of the negative net worth.

Why do you think the CMD was removed just before the elections? Did I know that I will come back as the civil aviation minister? As far as constituting the board is concerned, I do not take the decisions.

But you have taken a lot of names...

No, I have never done that. It was all guesswork.

Names like Ratan Tata and Sam Pitroda have come out.

I have not given any name. And if the names have come out, they must have come from elsewhere because I am not authorised to select the board.

'I do not take any decision' 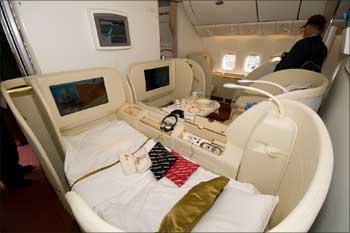 You have been saying that the ministry does not take the decisions, whether it is aircraft purchase or bilateral rights or price negotiations or appointment of the board or the fuel price. But the airline people say that the ministry and the minister force all the decisions on them. One instance is of selecting SATS as the joint venture partner for ground handling.

The allegation in the case of the SATS joint venture is that Air India is being asked to give up its revenue and get nothing in return, and that you have decided this.

This is rubbish being fed by the unions. This is what pains me the most, that Praful Patel's integrity is being questioned.

We have not done that...

I do not say you have done that, but it has been done by a section of the media. For instance, on negotiating the price of the planes, I did not do it, a group of ministers sat across the table with the aircraft manufacturers and negotiated the terms. 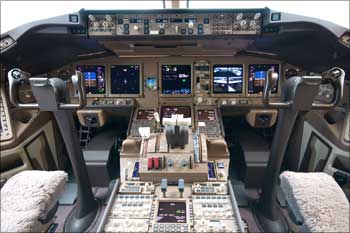 Air India says it is being asked to give up 100 acres of land in Mumbai airport, for nothing in return.

They don't own the land, and they are getting alternative land.

Why has the AI-Indian Airlines merger not been implemented properly?

They have not yet been able to integrate the IT systems. While we are talking, Air India and Indian Airlines fly with different codes. When the matter went to the Central Vigilance Commissioner many times, my secretary asked them to tell him how to go forward with that.

How can the CVC tell him that?

No, I mean to ask them why can't you do that, and it is coming to me all the time. Now, they are telling me that the IT system would be integrated by March 2010. I will tell you there are many elements within the airline who do not want the merger to happen. They have some vested interest. That is why the merger has not been completed.

Air India had assumed while buying the new aircraft that it will grow at 12-14 per cent at a time when the market was growing at 6 to 8 per cent. This is despite the fact that you were offering liberal bilaterals as well as allowing domestic carriers to go international. What made A-I think that it could out-perform the market?

I don't deny the fact that all the airline's assumptions went wrong. At that point in time the market was looking up and everything looked fine. In fact, all the airlines worldwide got it wrong. After all, who knew about this fall in growth?

'I have never supported a bail-out for private airlines' 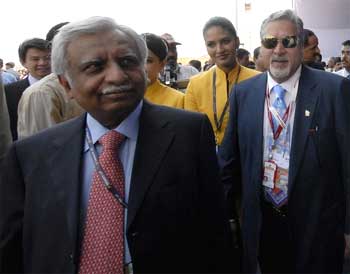 How can you say that aviation fuel prices are high when it is cheaper than petrol, and not much more expensive than diesel, and when 30 per cent of the aviation sector in India is making profit at current prices?

I have always advocated a uniform tax on jet fuel and not on decreasing the price. There are many states which charge sales tax as high as 30 per cent on jet fuel. I want this reduced for both low-cost and full-service carriers. I, as the minister for civil aviation am convinced about this demand.

But how can you expect that ATF should be given to airlines at a rate cheaper than what is given to the public transportation system? Also, the low-cost carriers are making money despite these ATF prices, so why bail out Jet and Kingfisher because they expanded recklessly?

The government has constituted a GoM (group of ministers) and it is up to them to decide. It is not necessary that they must agree with me.

While the low-cost carriers are making profits, the full-service carriers are not. If they cannot manage costs, how do you support their demand for ATF reduction?

I have never supported a bail-out for private airlines. I have never supported a bail-out for Air India also. But we have to do certain things as shareholders. While Kingfisher offered a lot of premium class services and lost money, Jet Airways is losing money because it grew too fast on international routes.  Also, the private carriers grew too fast and we of course do not regulate their growth.

'Yes, the airline will survive' 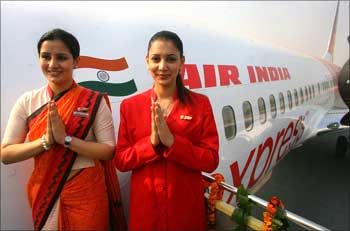 Air India has announced a new focus on being a low-cost carrier. The danger is that its revenue will be low while costs remain high. That could mean the death-knell of the airline.

Please talk to the CMD of Air India, he will explain.

But even now, 99 per cent of the employees of Air India feel that they are doing a good job, and the ministry is responsible for the poor state of the airline. With that mindset, do you think the airline can cut costs?

That is the best part of the whole thing. I have been saying since 2004 that the airline should be sold, but I have been asked to keep it going.

So, will the airline survive?

Yes, the airline will survive. Every time it was in trouble the problems were rolled over, and we will roll over this time also. The airline needs Rs 3,000 crore (Rs 30 billion) of equity infusion and conversion of high-cost debt to low-cost debt to keep it going.