Sign in  |  Create a Rediffmail account
Rediff.com  » Business » AirAsia India to start a fresh round of fare war

No one was surprised that AirAsia started a price war ahead of its debut on Thursday. The shocker though was that it didn't win that fare war.

AirAsia's dapper India CEO, Mittu Chandilya, had announced that his tariff would be benchmarked against first-class train fares - the country's low-cost carriers weren't really his rivals.

He subsequently said AirAsia fares would be 35 per cent cheaper than the low-cost carriers.

But AirAsia must have realised by the time its maiden flight from Bangalore to Goa took off on Thursday, this is a game all Indian carriers - full-service as well as low-cost - can play. In fact, they are all past masters in it.

AirAsia started its India innings by offering 25,000 tickets in two tranches for a basic fare of Rs 5 on its flights from Bangalore to Goa as well as between Bangalore and Chennai till October 25.

But it took just a few hours for IndiGo, India's largest and perhaps the only profitable carrier, to better the offer: 25,000 seats at Rs 1 each.

So, while AirAsia might have started the tariff war, the reality on the ground is different: it is no longer the cheapest airline on these two sectors.

Fares available on travel portal makemytrip.com show that on the Bangalore-Goa route, there is only one day between June 16 and 30 on which AirAsia can claim to be the cheapest.

In fact, its tariff ranks second to sixth on various days of the month. For instance, on June 30, AirAsia is fifth in the pecking order with a fare of Rs 3,370, which is two-thirds more than IndiGo's Rs 2,008.

In comparison, SpiceJet during the period has the lowest fare on as many as eight days, while GoAir is the cheapest on four days.

On the Bangalore-Chennai route, IndiGo has offered the same fare as AirAsia (Rs 1,699) every day between June 22 and June 30.

And it's not just the low-cost carriers that have decided to take AirAsia head on - even the full-service ones have joined the party.

On several other days of the month, Air India fares on the sector are lower than AirAsia's.

Says a senior executive of a low-cost carrier: "Air India has in fact priced its fares at least Rs 200 to Rs 1,000 lower than AirAsia, despite the fact that its costs are 50 per cent higher. Obviously, it is undercutting AirAsia."

It's a new reality that AirAsia has to face in India: in all other markets, including Malaysia, its country of origin, low-cost fares are a fourth of full-service fares.

What is pretty clear is that Indian carriers will not allow AirAsia to win the tariff game - its USP.

After all, most of them have indulged in cutthroat fare wars for several years, including the full-service carriers which have adopted low-cost fares, though their operational costs are up to 50 per cent higher.

SpiceJet, the low-cost carrier owned by the Maran family, has announced a series of attractive fare offers throughout the year, including one with a basic price of Rs 1.

Just a few days ago, it decided to take on AirAsia by launching a monsoon scheme for Rs 1,999 between south Indian cities - the key catchment area for the Tony Fernandes-owned carrier. 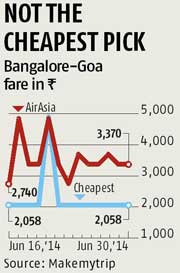 But it would be unfair to say that AirAsia's low fares have gone waste.

Aviation analysts say it has sold 17-18 per cent of its inventory (of around 136,000 seats) till October 25 on these two routes (Bangalore-Goa and Bangalore-Chennai) at the lowest fare of Rs 5.

This, say analysts, is reasonable for a new airline, especially given that the passenger load factor on these routes is never more than 80 per cent.

So, AirAsia can make some money by selling the inventory which otherwise would have stayed unsold.

To put it in the right perspective, all the airlines put together have hawked less than 6 per cent of their inventory till October 25 at the rock bottom fare of less than Rs 500.

AirAsia has also offered some tickets at Rs 990.

Yet, the challenge is whether it will be able to increase the fare buckets quickly in order to make good the losses it has made by selling seats at rock-bottom tariff in its introductory offer.

A top executive of an airline says that in order to break even on the two routes, seats should be sold at an average fare of Rs 3,400 to Rs 3,500.

"The problem is that currently the average fare on these routes is Rs 2,000 to Rs 2,500 at the most. Obviously, everyone is selling at an operational loss," he adds.

The executive points out that in order to make up for the fares in the cheapest bucket, AirAsia should be able to sell the remaining tickets at over Rs 5,000 if it wants to break even.


Image: Other airlines will slash fares to match up with what AirAsia is offering customers.
Photographs: Bazuki Muhammad/Reuters

The inability to push up fares as the flight date gets closer is clearly reflected in the fact that most of the carriers are nowhere near the fare buckets they declare to the government.

AirAsia, for instance, has declared that it will sell fares on the Bangalore-Goa route from Rs 482 to Rs 13,249 (without taxes and other charges).

Yet, the highest fare that it has managed in June until now is lower than Rs 5,000.

In spite of these misgivings, AirAsia has shaken the market with its promotional offer - it has forced all other airlines to offer low tariffs and has also made it difficult for them to quickly move to the higher tariff buckets. AirAsia has mounted six daily flights on these two routes, which add up to about 15 per cent of the total capacity.

In contrast, competing airlines fly as many as 48 flights on the two routes. It may be small but it is not an airline that can be ignored.


Image: AirAsia has declared that it will sell fares on the Bangalore-Goa route from Rs 482 to Rs 13,249.
Photographs: Toby Melville/Reuters

The airline has induced a fresh dose of competition into the market at a time when the industry is reeling under severe financial pressure, thanks to the low fares.

The industry reported losses of $ 1.65 billion in 2013-14, according to the Centre for Asia Pacific Aviation.

Privately, most carriers say the fares need to move up urgently. AirAsia's entry will only delay the recovery.

At the moment, incumbents have decided to match - even better - AirAsia's fares. The question is who will blink first?


Image: Pilots prepare before they go through their biannual review in a flight simulator at AirAsia Academy in Sepang outside Kuala Lumpur.
Photographs: Bazuki Muhammad/Reuters