Will Viral Acharya sing a new tune at the RBI?

Hopefully, the grey world of central banking in a nation hit by demonetisation, will lighten up with some of his notes soon.
Anup Roy profiles Viral Acharya, the new RBI deputy governor, a man of many parts and many interests. 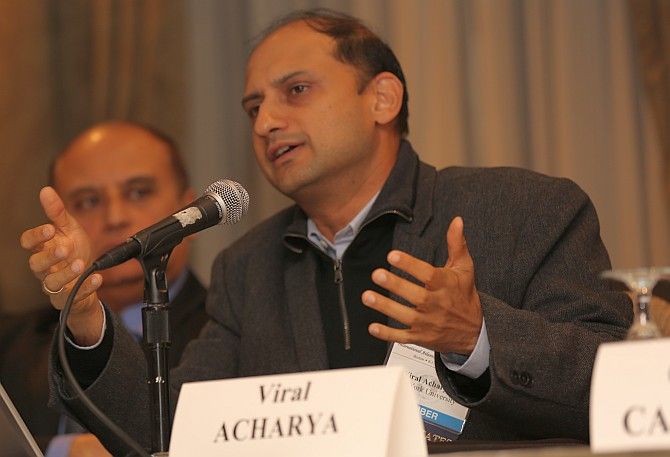 IMAGE: Viral Acharya, the RBI deputy governor-elect, is a "workaholic," who does research on the phone, email and Skype video chats."

Viral Acharya, professor at New York University's Stern School of Business, will take over as deputy governor of the Reserve Bank of India for three years, effective January 20.

Though the RBI traditionally has four deputy governors, one post has been vacant since Urjit Patel, who was deputy governor, became governor three months ago.

A notification on the RBI Web site said Acharya, 42, would head the monetary policy and research cluster.

Deputy Governor R Gandhi, who will retire on January 20, is in charge of the monetary policy department.

The post of deputy governor in charge of monetary policy is given to economists of repute and in most cases, holders of the office have been lateral entrants.

Acharya is considered a shining star in the field of finance.

His resume runs into 22 pages, and is stuffed with his qualifications, experiences and numerous research papers that have been presented in seminars and published over the years in prestigious journals.

In an email response to Business Standard, Acharya said he would not want to give interviews to the media and would lie low for a bit, taking the bearings of the new job.

"I am honored at being offered the opportunity and hope to give it my best," he, however, replied.

Viral Acharya grew up in south Mumbai, in a family of medical practitioners. He did his PhD in finance at New York University's Stern School of Business in 2001

In many ways, the career path of the 'poor man's Raghuram Rajan' (as Acharya once described himself jokingly) is similar to that of the former RBI governor.

Like Rajan, Acharya is an Indian Institute of Technology alumnus (BTech in computer science and engineering) before he switched to finance and economics and became a 'rising star in finance', much before he turned 40.

Both are passionate about cricket and, in fact, Acharya was one of the lead players in IIT-Bombay's cricket team. Acharya mentions Rajan as one of the references in his resume.

His resume says his research interests are regulation of banks and financial institutions, corporate finance, credit risk and valuation of corporate debt, asset pricing with a focus on the effects of liquidity risk, sovereign debt and international finance.

He is also a strong proponent of bad bank, or a bank created to hold bad assets of banks, something that Rajan opposed while at RBI.

Acharya has written widely cited papers, either alone, or co-authored with reputed economists and finance gurus, including two with Raghuram Rajan. Several of these papers have also received the best paper awards at the seminars they were presented.

The tone of his one particular paper, co-authored with Rajan, 'Sovereign Debt, Government Myopia and the Financial Sector,' describes how myopic governments 'seek popularity but can nevertheless commit credibly to service external debt.'

In one of his papers, Acharya established how public sector banks, even if financially weak, did better in a crisis situation than their private sector peers because of access to government guarantee and forbearance.

In a 2015 paper with Indian School of Business Professor Krishnamurthy V Subramanian, Acharya estimated that the Indian banking sector would require about $55 billion in market value of equity to maintain an 8% capital ratio, and that in a shock scenario, 'the Indian financial sector’s capacity to recapitalize itself in future stress is worth a careful scrutiny.'

Krishnamurthy, a friend of Acharya through a long association in research, described the deputy governor-elect as a "workaholic," who does research on the phone, email and Skype video chats.

"Besides being a very good person, he is also a workaholic, who pushes hard trying to get stuff done," said Krishnamurthy.

"He is a good choice," Krishnamurthy added. 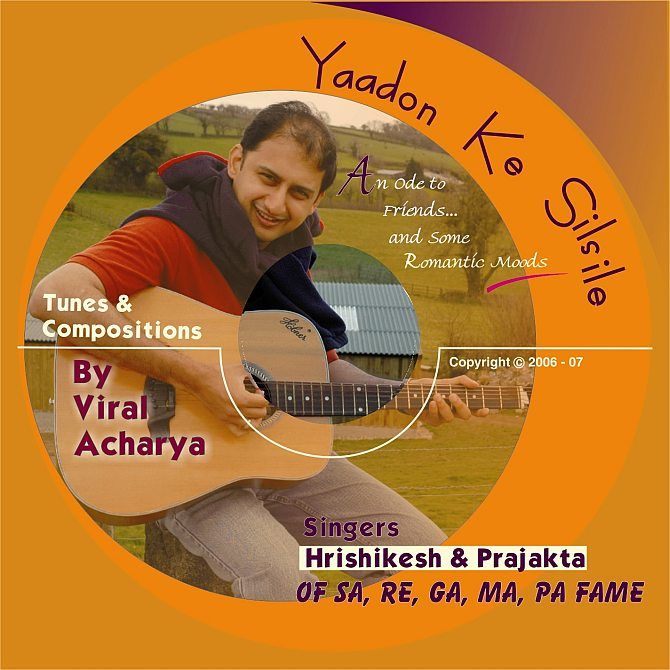 IMAGE: Viral Acharya likes 'the songs composed by S D Burman and R D Burman and rendered by Kishore Kumar.'
The cover for his first album, Yaadon Ke Silsile -- An Ode to Friends and Some Romantic Moods.

But what does he himself say about his real passion? His Web site has a clue.

'Music is my passion. I love listening to most kinds of music. I have a slight preference for Indian and Western classical music and a strong preference for light Indian film music, especially the songs composed by S D Burman and R D Burman and rendered by Kishore Kumar,' his personal Web site says.

In New York and New Jersey, Acharya sang as a part of a local Indian film music band called Surbahaar. The proceeds of the performance went for charity, among others, to literacy projects in India for Pratham, an NGO that he co-founded and was a chairman.

Just as he writes serious research papers, he composes poetry and music with élan.

Hopefully, the grey world of central banking in a nation hit by demonetisation, would lighten up with some of his notes soon.