With a large part of the asset quality stress revealed by most state-owned banks, it makes sense to buy their stocks, states Hamsini Karthik

More often than not, analysts explain why investors should stay away from stocks of public sector banks.

A section of analysts feel now may not be a bad time to buy select PSBs.

There are two reasons that support this argument.

One, most PSBs have been forthright in quantifying the pain ahead. For instance, Punjab National Bank has put assets worth Rs 30,000 on the watch list.

While some analysts are of the view that these numbers are only indicative, there are others who think differently.

S Nagnath, president and chief investment officer, DSP Black-Rock Investment Management, adds that its intensity of recognition will reduce over the next two to three quarters.

Other experts believe PSBs have gone ahead of the brief. Gautam Chhaochharia, head of research -- India, UBS, is of the opinion that PSBs have been more aggressive in acknowledging the pain.

Another comforting factor is the strong deposit base or customer franchise these banks have built over the years, which as Nagnath points out, is often unappreciated by the Street.

Also, reports suggest that mobile banking transactions (in volume and value terms) of large PSBs are higher than those of private banks. With these points in favour, as PSBs broad-base their lending activities to agri-lending, small and medium enterprises loans, home loans and personal loans, achieving the eight-10 per cent credit growth guidance in FY17 appears reasonable.

While these targets are smaller than those of private banks (20-22 per cent in FY17), experts feel achieving these would put PSBs back on track in FY17.

Interestingly, even after revising lower their earnings estimates for SBI after the results of the quarter ended March, analysts at Motilal Oswal Securities expect it to post earnings per share growth of 22.8 per cent and 25.9 per cent for FY17 and FY18, respectively, according to their June 2016 report.

For the other four large PSBs, too, the brokerage expects either a return to profits or good growth in earnings in FY17, and around 20 per cent profit growth in FY18.

Valuations too are undemanding. Price-to-book value, a key metric to judge the investment worthiness of banking stocks, is low for most PSBs.

Stocks such as PNB, BoB, Canara Bank and Union Bank are trading below their book value as against their historic price-to-book value (P/BV) of 1.5-2 times.

This is despite PSB stocks trading at a near four-month high and recovering between 5-10 per cent after the fourth quarter results.

This should help PSBs such as PNB to meet their loan growth target for FY17.

What also provides comfort is that these large banks continue to generate good amount operating profits every year.

However, there is a word of caution and downside risks as well. Analysts say investors should restrict their interest to the top five PSBs -- SBI, BoB, PNB, Union Bank and Canara Bank, as capital adequacy (barring PNB) is at comfortable levels to meet the FY17 growth targets.

Also, investors shouldn’t expect miracles as the pain of providing for existing stressed assets (and some of it that may come up in normal course of business) going ahead, so the quarterly performance may continue to be bumpy.

A prolonged economic slowdown could also hurt and add to their asset quality stress.

A key unknown is the price at which the government will infuse equity capital.

Experts say, if the infusion is done at below book value, it could lead to significant equity dilution, thereby hurting sentiments. 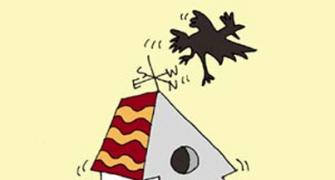 Is it the right time to invest in bank stocks?