Will new Maha govt sweeten the lives of sugarcane growers? 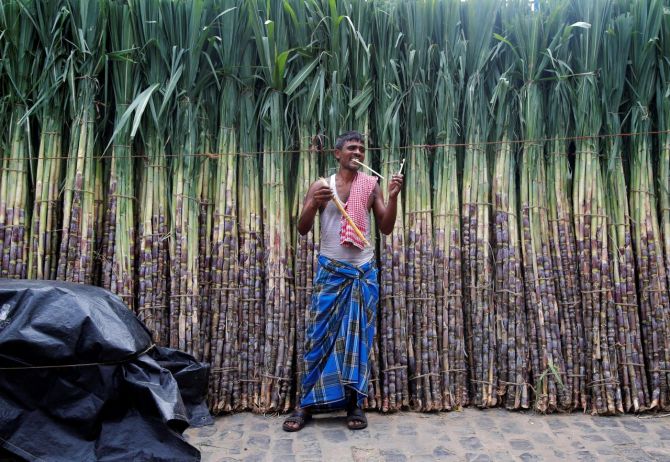 The ailing Maharashtra cooperative sugar sector sees its fortunes reviving with the prospective installation of the three-party government in Maharashtra, which has the support of the Sharad Pawar-led Nationalist Congress Party (NCP).

A request for working capital support that the mills had made to Maharashtra State Co-op Bank Ltd, the apex bank in the state for cooperative lenders, was shot down.

Due to this, they have not been able to start crushing operations, which usually begins in the first week of November.

Their arrears to farmers from the previous season run into a few thousand crore rupees.

The heavy flooding, along with state elections and the prolonged delay in government formation had already held up operations inordinately at these sugar mills.

According to Indian Sugar Mills Association (ISMA), last year about 149 mills in Maharashtra had started crushing before November 20 and had produced 631,000 tonnes of the commodity.

However, with the new dispensation set to take over in Maharashtra, the state sugar lobby, which is predominantly cooperative in nature, is hoping for a turnaround.

This is because the NCP, wich commands a great deal of support among cane growers and sugar mills, is likely to play a major role in the new government.

Interestingly, 75 per cent of managing directors of the state’s functional sugar mills, numbering more than 190, owe allegiance to the NCP, which explains why the sugar industry is so optimistic.

“NCP has traditionally been very supportive of Maharashtra's cane growers and sugar industry. Since a government supported by the NCP is set to come to power in the state, the sugar industry is sanguine about the future prospects and the speedy resolution of all pending issues,” National Federation of Cooperative Sugar Factories Limited (NFCSF) advisor Murlidhar Chaudhary told Business Standard.

He claimed the issue of arrears was also likely to be resolved, since the bankers would be keener to lend to sugar mills under the new regime.

Last year, the mills in Maharashtra had procured cane worth Rs 23,360 crore.

According to sources, the state cooperative sugar mills’ representatives had recently held a meeting with bankers seeking loans, including working capital.

However, the banks had expressed their inability to extend assistance, citing lack of credit resources.

“In fact, one of the main reasons for the delay in crushing in Maharashtra had been the credit squeeze being faced by mills, which is now likely to be resolved with the coalition government coming to power,” Chaudhary noted.

Currently, only a handful of the mills have started crushing. However, all of them are now expected to be up and running within the next 10 days.

UP and Maharashtra together account for more than 60 per cent of India’s annual sugar output.

The cane acreage is pegged at 4.83 MH this year.

The estimated fall in sugar production is partly due to the incremental increase in ethanol production, which would lead to the diversion of a portion of the domestic cane harvest for mixing in fuel.