News
Business
Movies
Sports
Cricket
Get Ahead
Money Tips
Shopping
Sign in  |  Create a Rediffmail account
Rediff.com  » Business » Why Moody's outlook on India need to be viewed with scepticism

Why Moody's outlook on India need to be viewed with scepticism

Chief Economic Advisor K Subramanian said it is evident that investors into the Indian economy look for better cues than a ratings call. The improved outlook on the Government of India announced by rating agency Moody’s might need to be viewed with some scepticism.

There is no doubt the performance of the Indian economy has sharply improved from the deep trough it hit last year.

But the ability of the second largest global ratings agency to assess an upside and downside before events make everyone wise about India has been dismal for a long time, as the chart shows.

Recently the rating company changed the outlook on the Government of India's ratings to stable from negative and affirmed the country's foreign-currency and local-currency long-term issuer ratings and the local-currency senior unsecured rating at Baa3.

The change, as Moody’s has explained, is because of improved performance of the financial sector.

“With higher capital cushions and greater liquidity, banks and non-bank financial institutions pose much lesser risk to the sovereign than Moody's previously anticipated”.

What is the risk to which Moody’s is referring? Moody’s change of outlook for India is based on an expected change from this one set of statistics for the future.

The commentary by the firm does not give the numbers but makes clear it expects a similar huge burn of capital by the state-owned banks to cushion against bad loans, as happened in the past seven years, will not be repeated.

In other words, for every rupee of government support they got, the banks wrote off Rs 2 for bad loans.

This furious pace of burn or bank provisioning “has allowed for the gradual write-off of legacy problem assets over the past few years.

"In addition, banks have strengthened their capital positions, pointing to a stronger outlook for credit growth to support the economy,” Moody’s said.

With the improvement in the solvency of the banks and others, they can lend more.

Moody's expects the cycle to be sustained as policy settings normalise.

There is no change in the agency’s assessment of any other sector of the economy.

The assessment is a strong endorsement of the course of government action.

The latest commentary reverses its own assessment of the capital needs of state-owned banks that it made last year (August, 2020).

In a report, “Coronavirus fallout will leave banks with capital shortages again”, Moody's Investors Service noted the banks will need external capital of up to Rs 2.1 trillion over the next two years “and the most likely source to plug this shortfall will be government support”.

Since the government has subsequently announced that it will only offer a guarantee of Rs 30,600 crore to set up a bad bank and expects no more to underwrite the capital shortage at banks, last year’s assessment by Moody’s is presumably history.

The guarantee will be against the Security Receipts to be issued by the proposed National Asset Reconstruction Company Ltd to buy out Rs 90,000 crore of bad loans from banks and then some more in the second phase, said Finance Minister Nirmala Sitharaman.

This is not the first time Moody’s has changed its assessment of the Indian economy at a rapid clip, often following public developments but seldom offering a guide to investors. Ratings, by the way, are not meant to impact investment in the equities market but guide debt issues.

A country’s ratings affects the ratings of the debt papers of companies headquartered there, when they scout for money in the global market.

Better ratings could conceivably lead to lower interest costs for the papers, but few Indian companies have said they have been hamstrung by the sovereign ratings.

This means for India-bound investors, the significance of a change in rating, much less an outlook, is fairly insignificant.

To get a sense of how the second largest rating agency globally has been behind the curve, just look at the chart.

It has changed India’s rating 13 times in just over 30 years.

In the same period its larger rival, S&P, has changed the ratings just six times.

If one includes the changes in outlook too, the number of changes by Moody’s has been 19 or about once every one-and-a-half year.

India’s best ratings by the bond market was in the 1980s, when it was a closed economy with two bailouts by the International Monetary Fund (IMF).

India was rated A2 by Moody’s and triple BBB by S&P.

As the chart shows, India has been in the last league of investment grade papers (Baa3 with a stable outlook) for years under Prime Minister Narasimha Rao, at the fag end of Atal Bihari Vajpayee’s term, during Manmohan Singh’s terms and now again under Narendra Modi.

India’s best showing was in April 2015, when the outlook was bumped up to positive.

For investors, the commentary by the rating agency will consequently remain a second guess of the state of the economy.

It is no surprise that the markets have not responded to the change in outlook.

The outgoing Chief Economic Advisor K Subramanian has, however, offered a detailed study of the ratings action by the three global agencies, saying they have not tracked India well.

It is evident that investors into the Indian economy look for better cues than a ratings call. 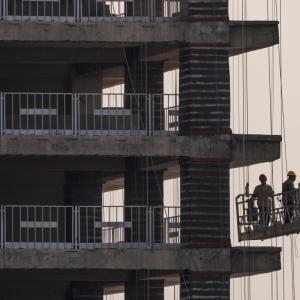