Why independent directors go for the escape hatch

'Today, according to the law, you can't even claim legal expenses when fighting a case as a non-executive director unless you are acquitted. Given how high legal expenses are, that alone is enough to scare anyone away.' 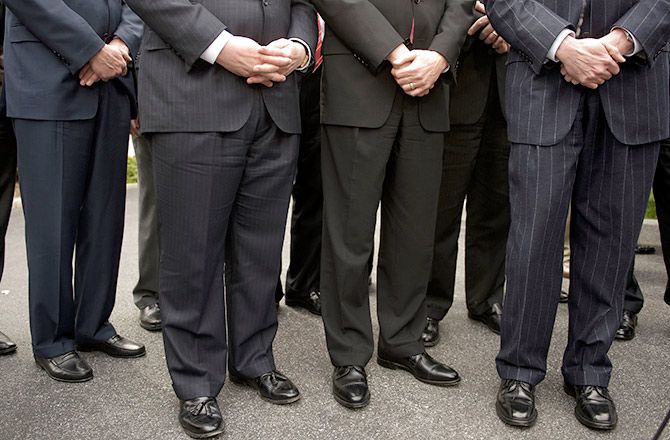 Should independent directors be more accountable to companies that run into turbulence, or is it their prerogative to exit when the going gets tough?

That's a question corporate India is finding difficult to answer as it watches independent directors go for the escape hatch when the sailing isn't smooth.

Recently, Vikram Mehta abruptly resigned from Jet Airways where he was an independent director, as well as a member of the troubled airline's audit committee.

What did he see that led him to exit?

While Mehta cited time constraints as the primary reason for his departure, he continues to be on the boards of Apollo Tyres, HT Media, Mahindra and Mahindra, Larsen and Toubro, Vodafone India, and Colgate Palmolive India, according to data from Bloomberg.

Mehta isn't alone in exiting when the chips are down.

His reasons were more candid.

"Unhappy with developments," Chandrashekhar said on a WhatsApp message, according to media reports.

Arun Nanda, non-executive chairman of Mahindra LifeSpace and Mahindra Holidays, said it's important for any independent director to provide governance but the system ought to protect them.

"If I was on a board, I would prefer to support the new management instead of resigning.

"But I should be assured that I will not be held liable or harassed for acts which I had not committed," he said, citing how directors of a bank were charged before investigations recently, or in another case how the assets of all independent directors were frozen.

"Today, according to the law, you can't even claim legal expenses when fighting a case as a non-executive director unless you are acquitted," he added.

"Given how high legal expenses are, that alone is enough to scare anyone away." 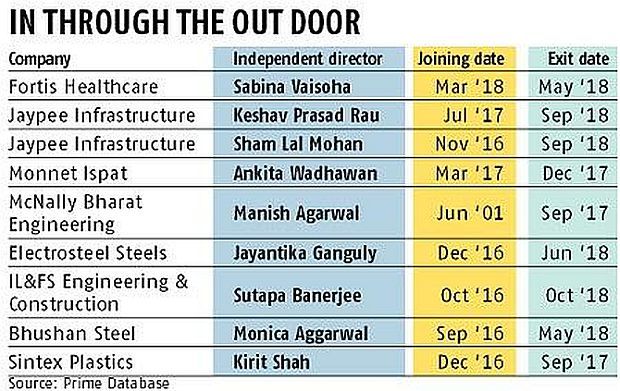 Separately, Shivpriya Nanda, managing partner of law firm Jyoti Sagar and Associates, said it's a dangerous precedent to start treating independent directors as executive directors because any business can start to fail and its success is ultimately the responsibility of the operational CEO.

"Every non-executive director has the prerogative to record his or her point of view in a company meeting, minutes of which then go down on record."

Her point: There does exist a platform on which one's disapprovals can be recorded.

But at times, the lines between right and wrong blur.

Nanda added that a director may want to do the right thing but said if a troubled company is not paying TDS on his service fees, then it puts him in a criminal position.

Uday Khanna, the former CEO of Lafarge India, also on the boards of Kotak Mahindra Bank, Murugappa Group, among others, notes that it's unfair to single out independent directors from the collective whole, casting a higher responsibility above that of the executive and nominee directors especially when things go wrong in a company.

"While independent directors do have to specifically keep interests of the minority shareholders upper most, it should be appreciated that they have less control or influence over the day-to-day operations compared to executive, nominee and promoter directors," Khanna said.

He concedes, however, that if independent directors violate fiduciary duties, they must face scrutiny from the regulator with investigations to be kept confidential till a conclusion is reached.

However, an assumption that in all cases they are guilty whenever things go wrong in any corporation may be unfair and puts reputations at risk.

"This will detract many talented persons from accepting board positions.

"This then may not be in the interests of the corporate sector's growth," he said.

Rama Bijapurkar, herself a former board member at Godrej Consumer Products, CRISIL, Infosys, and Axis Bank, said the "Personal reason, and time-constraint factors" are standard reasons cited when directors want to flee.

She goes on to say that the new Companies Act gives one the provision to explain what went wrong and then that must be utilised.

"One can't just leave a company in trouble and join others that are only doing well," she said.

The challenge, of course, is in applying a blanket set of rules to individuals, who may have entirely different sets of circumstances in their lives.

Amit Tandon, founder and managing director of Institutional Investor Advisory Services, said there could be genuine reasons why people are leaving a board.

"IL&FS is a good place to start and if I was an independent director who raised red flag with the company, the CEO may want to continue his or her course of action, and so, do you stay on?"

He sums up, saying regulations don't favour independent directors like they do in case of a CEO.