The GST Council's agenda includes trimming the number of items in the 28 per cent slab by 75 per cent, easier compliance for assessees and small taxpayers, and a presentation on bringing real estate under GST.
Dilasha Seth reports from Guwahati.
Illustration: Dominic Xavier/Rediff.com 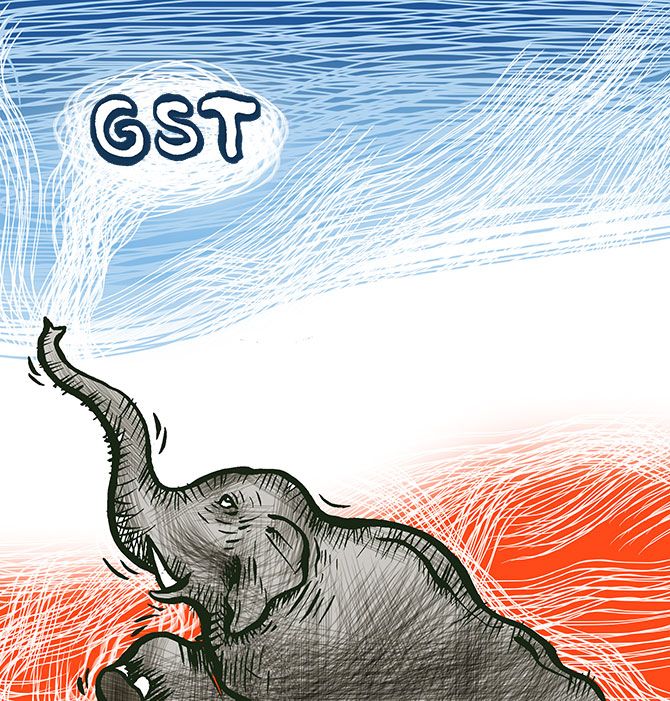 Ahead of the crucial goods and services tax (GST) Council meeting in Guwahati on Friday, Congress finance ministers pitched for 'a major overhaul' in the indirect tax reform, suggesting that the meeting may be a stormy affair.

The four Congress finance ministers demanded bringing real estate, petroleum, and electricity in the GST net, besides a significant reduction in the tax rate for commonly used items and easing the compliance burden.

Reducing the 28 per cent GST basket to just 62 items is on the agenda of the Council meeting, besides easing the compliance burden for all taxpayers.

Including real estate in the GST is also slated to be discussed in the day-long meeting, though at a conceptual stage.

"The feeling one gets is that the entire GST has been introduced in undue haste, causing huge damage both to government revenues and costs to business... if not corrected quickly, GST may turn out to be the biggest destroyer of the Indian economy," Punjab Finance Minister Manpreet Singh Badal told the media ahead of Friday's GST Council meeting.

The GST officers meeting in Guwahati on Thursday, November 9, started noisily with Assam Congress leaders protesting outside the venue demanding reduction in the highest GST slab from 28 per cent to 18 per cent.

Former Assam chief minister Tarun Gogoi, along with Assam Congress President Ripun Bora and other party leaders and workers, staged a gherao at the Radisson Blu, the Council meeting venue. They were arrested and taken to the Basistha police station.

'We are protesting against the reckless GST and demanding a rollback,' Bora tweeted.

Meanwhile, GST officers visited the Kamakhya temple. A cruise on the Brahmaputra during the sunset followed.

Earlier in the day, officers met to create a consensus on key issues, forming the basis for the minister-level Council meeting, to be chaired by Union Finance Minister Arun Jaitley on Friday.

The Council has an exhaustive agenda for the 23rd meeting.

It includes trimming the number of items in the 28 per cent slab by 75 per cent, easier compliance for assessees and small taxpayers, and a presentation on bringing real estate under GST.

For including real estate, the approval of the states is key because the stamp duty and registration fees on property are their exclusive domain and will require an amendment of the Constitution.

Stamp duty charges vary across states, currently in the range of 3 to 10 per cent.

According to the proposal of the fitment committee, the 28 per cent slab should be for 62 items, including digital cameras, hair dyes, marble and granite, chocolates, and cement.

Easing the compliance burden, the Council may decide on continuing the summarised tax return filing beyond December 31, instead of GSTR 1, 2 and 3.

"This meeting of the GST Council would deliberate on some thorny issues and it is hoped that the consensus building process we have seen in the previous meetings continues,” said M S Mani, partner-GST, Deloitte India.

"Since several issues relating to states are expected to be debated, and the outcome of this meeting will be very keenly watched as it will determine the course of the largest tax reform of the country," Mani added.

The Council may allow quarterly return filing for all taxpayers with a monthly tax payment. This proposal is there in the report of the group of ministers led by Assam Finance Minister Himanta Biswa Sarma.

Besides, the composition scheme, which allows a flat rate of tax and easier compliance, may be eased further.

The Council may increase the threshold for eligibility to an annual turnover Rs 1.5 crore to Rs 2 crore from Rs 1 crore now. The move will require an amendment to the GST law.

A flat one per cent rate for manufacturers and restaurants will be considered against the current rates of two per cent and five per cent, respectively.

Allowing interstate sales under the composition scheme will also be taken up.

Additionally, a reduction in late filing fees to Rs 50 per day, against Rs 200 at present may also be considered. 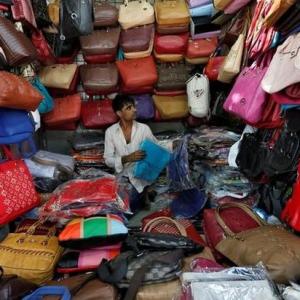