The department of financial services has decided to give banks commission, to ensure these accounts are kept active. 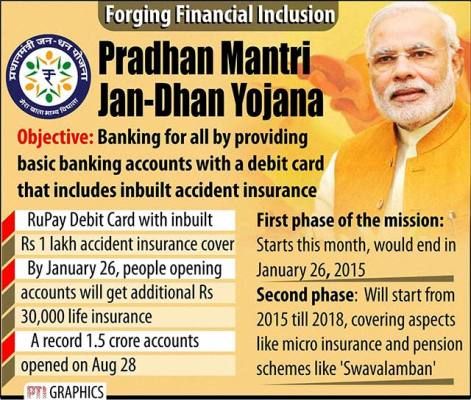 Though the Pradhan Mantri Jan Dhan Yojana has successfully exceeded its financial inclusion target by opening 115 million bank accounts, most of these are ‘zero-balance’. According to data released by the ministry, only 28 per cent of the accounts opened under the scheme are active, with about Rs 9,000 crore (Rs 90 billion) deposited in these.

The ministry feels it is imperative to keep accounts opened under the scheme active.

It has already put in place various measures such as connecting the Direct Benefits Transfer scheme to these accounts.

So far, the DBT for liquefied petroleum gas, along with those for a few other schemes, have been linked with these accounts.

The department of financial services has decided to give banks commission, to ensure these accounts are kept active.

A circular to this effect has already been issued to banks.

Of the accounts opened at public sector banks under the Jan Dhan Yojana, 71 per cent are zero-balance, against 64 per cent for private banks.

Among private lenders, the percentage of ‘zero-balance Jan Dhan accounts at YES bank is 89, Kotak Mahindra Bank 77 and Axis Bank 75.

Among PSBs, 95 per cent of State Bank of India’s Jan Dhan accounts are zero-balance; for Indian Overseas bank, it stands at 84 per cent.

Of the bank accounts opened under the scheme, about 90 million were at PSBs, while private banks accounted for only 4.1 million accounts (3.6 per cent of the overall number).

“Public sector banks have much greater rural penetration compared to the private sector,” Hasmukh Adhia, secretary in the department of financial services, said on Tuesday.