‘We should become an all-encompassing entertainment and information destination,” says chairman Subhash Chandra, who monitors the group on a monthly basis, leaving the day-to-day operations to the chief executive officers. 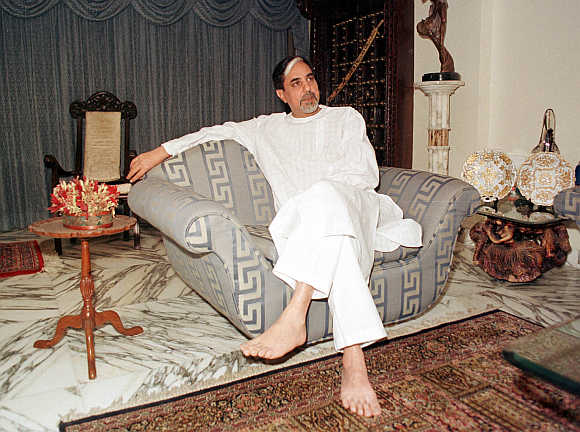 So what is Subhash Chandra’s Essel group up to?

In a telephone chat from his hometown in Hissar, Chandra, an independent member of the Rajya Sabha, said, “I am busy in Parliament and with the Dr Subhash Chandra Show, and the five-six villages that I have adopted here.”

But as chairman of the group, isn’t he involved? “Yes I am, only to review. My advice to Punit (Goenka, Chandra’s son, who runs Zee) and Amit (Goenka, Chandra’s second son, who runs Zee’s international arm) is that we have concentrated on in-house entertainment so far. Now we must also look at out-of-home–like adventure or leisure. We should become an all-encompassing entertainment and information destination,” says Chandra, who monitors the group on a monthly basis, leaving the day-to-day operations to the chief executive officers.

Buying radio stations, television channels and a direct-to-home service is the group’s attempt to plug gaps in its flagship media and entertainment business -- Zee, Dish TV, Siti Cable and its news outfit Zee Media -- which brings in over 48% of its top line and a bulk of its profits. (See table)

However, a look at the other half makes it clear that, in many ways, Essel Group is not one entity.

In 2008, it was restructured and the shareholding was split among four brothers -- Chandra, Ashok, Jawahar and Laxmi Goel. Chandra is the chairman of the group and most of the firms within.

But each of the businesses -- media, infrastructure, packaging, education and others -- is run by one of the brothers or their sons.

So Zee Entertainment, for example, is run by Chandra and his sons.

The bid for oil blocks came from Essel Group Middle East where, “I am the only common link (with the group),” says Gagan Goel, director, Essel Group, and Jawahar Goel’s son.

Essel Group Middle East, which he set up in 2015, operates in energy, hydrocarbons and potash. Independently funded, the firm is looking for acquisitions, “in almost every part of the world,” says Goel.

“It is coincidence that all the deals bunched up close to each together,” says Himanshu Mody, head, group finance and strategy.

The rise and rise of Essel group

At a group level, the vision is to be the No. 1 or 2 in each of the businesses it operates in. This then gets broken up into strategy for each business separately.

For instance, with media and entertainment, “The idea is to get into all possible entertainment avenues needed to consolidate. From a Zee Entertainment perspective, we have cash on the balance sheet (around Rs 1,600 crore) and, therefore, are looking for acquisitions,” says Mody.

Radio was a big gap. “We didn’t get into radio earlier because the regulatory regime, especially with regard to the migration fee for the Phase 1 licensees, was unclear. Now, we have a clear runway, with regards to licence fees till 2030,” says Mody.

With Reliance it gets 45 operational, profit-making radio stations in Big FM and 14 new licences that are to be operationalised.

Earlier in September, the group picked up United Arab Emirates’ oldest radio station Hum. The radio foray also goes with an increased focus on music and digital by the group, says Mody.

On the broadcasting side, there has been the acquisition of Odia channel Sarthak in 2015, divestment of Ten Sports earlier this year and last week’s acquisition of Reliance’s Big Magic (comedy) and Big Ganga (Bhojpuri).

Now, except for Malayalam, sports and kids, Zee’s content portfolio is more or less complete.

On the TV distribution side, “We believe consolidation will deliver benefits to consumers through a bigger sales and distribution network, as digitisation progresses,” says Mody.

In infrastructure, a business the group had ventured into in 2007, the focus is on roads, renewable energy and smart cities, among other things. Essel Infra is among the more aggressive firms in its space, say analysts.

Note that media and entertainment is not just the biggest and most profitable business on Essel Group’s portfolio. It is also one of the oldest.

As the ambitions of the younger businesses led by the second generation come into play, more action from the group is inevitable.

Image: A file photograph of Subhash Chandra at home in Mumbai. Photograph: Reuters.