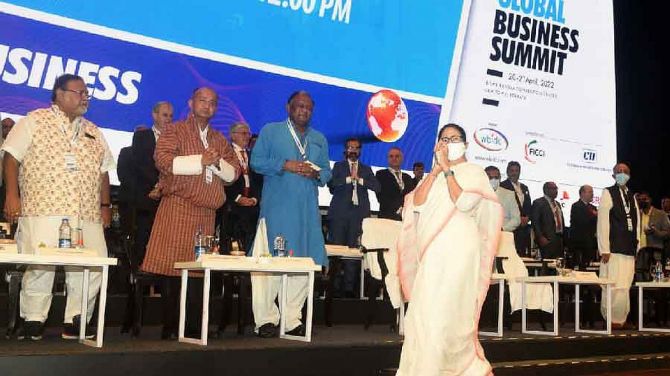 Addressing the valedictory session of the Bengal Global Business Summit, she said that a total of 137 Memoranda of Understanding (MoUs) and Letters of Intent (LoI) were signed for the investments.

Banerjee also said that the summit would create 40 lakh new jobs across sectors.

The two-day event was attended by 4,300 participants from 42 countries, the CM noted.

She said that her government decided to hold the two-day summit despite cynicism shown by some.

"I had said that the summit should be held and everyone be invited.

"We have fought the COVID-19 situation. Disasters may come and go. But development cannot be stopped," the CM asserted.

The feisty leader also said that it wasn't possible to stop people from moving on with their lives.

If COVID-19 cases surge again, "we will fight the disease", she stated.

"Bengal has shown the way (for others) by holding the summit at this juncture.

"We want industrial development not just in Kolkata, but also in the districts for creation of rural jobs.

"District chambers are the main pillars of the MSME sector," Banerjee underlined.

She said the two-day summit met with remarkable success.

"We must establish contact with all countries. We do not bulldoze. We do not divide people.

"A united family is a strong and successful family. We believe in the concept of shared goals and prosperity for all," the CM maintained.

Banerjee also stated that a deep sea port would be set up in the state, and a shale gas exploration policy would be framed in the near future.

"West Bengal possesses the second largest coal mine at Deocha Pachami in Birbhum district. The state also has world-class airports; the one at Bagdogra will soon see expansion," she said.

The CM, during the session, released a compendium on ease of doing business, launched portals on Silpa Saathi (for industries), export facilitation and self-help groups, along with a book on GI-tagged products from West Bengal.

She underscored that a task-force would be set up under the chief secretary for speedy implementation of projects.

During the two-day event, two sectoral committees were also set up, which would be co-chaired by industrialists in the fields of agriculture and allied services, MSME, exports, services sector and tourism.

She said that these committees would meet once in a month and give suggestions on sectoral policy changes for creation of more jobs and investment opportunities.

The West Industrial Promotion Board will discuss the policy changes suggested by these panels, Banerjee added.

The CM also announced that the next edition of BGBS in 2023 would be held from February 1-3.

In the last five editions of BGBS, the state attracted Rs 12 lakh crore worth of investment proposals which are in various stages of progress, and created 1.5 crore jobs.