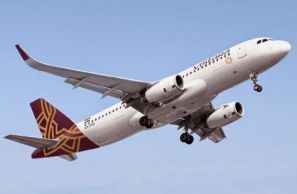 Vistara - the joint venture of Tata Sons and Singapore Airlines — may be able to take to skies by the end of this year, as it expects to receive its air operators’ permit from the Directorate-General of Civil Aviation (DGCA) by the end of next month.

Sources in DGCA said the airline had only recently imported two aircraft into the country and unveiled the livery on the first. Vistara is now in the process of readying itself for base audits and to conduct proving flights as required by the regulator before it can secure its permit.

A senior DGCA officer said: “There are few processes which remain to be completed. The airline has to conduct proving flights and demonstrate its preparedness to start commercial operations. If they are able to meet all requirements, we may be able to issue them a permit by the end of November.”

According to industry sources, Vistara was looking at commencing operations on October 15 to commemorate J R D Tata’s flight from Karachi to Mumbai on the same date in 1932.

J R D Tata’s flight carrying mail between the two cities was the first ever by an Indian company and it opened the air link to peninsular India. However, the approval process got stretched due to delays in importing the aircraft from Airbus’s manufacturing facility in Toulouse, France.

Vistara had earlier said it will have a fleet of five ready by the end of the year. According to initial plans, the airline will fly to five cities, which could go up to 11 after a year of operations. The airline will have 87 weekly flights linking Delhi to Mumbai, Goa, Bangalore, Hyderabad, Ahmedabad, Jammu, Srinagar, Patna and Chandigarh.

According to sources, Vistara is likely to offer 148 seats across three classes. While the airline management remains tight-lipped about its plans, sources said its Airbus A320 is likely to have 16 business class, 36 premium economy, and 96 economy class seats.

The airline has made Delhi its operational hub because of the capacity constraints at the Mumbai airport. Vistara has already booked six slots at the NewIndiraGandhiInternationalAirport in Delhi.

Vistara has evinced interest in operating international flights from India, depending on government approvals. Government rules do not allow domestic airlines with less than five years in operations and with a fleet of less than 20 aircraft to start international operations. The ministry is now reviewing this norm and has indicated the restrictions could be lifted.

Tata Sons holds a 51 per cent stake in the airline, while the remainder is held by Singapore Airlines. Together, the two companies have committed initial investments worth $100 million in the airline. The Tatas also have a partnership with Malaysian carrier AirAsia for a low-cost airline, which commenced operations on June 12 in India.