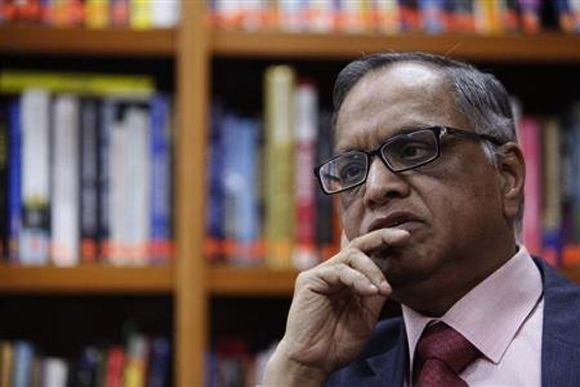 The hike in visa fees by up to $4,500 will not have an impact on the growth of the Indian IT industry, Infosys founder N R Narayana Murthy said on Friday.

"The important thing is that you have to provide excellent value to customers," Murthytold reporters after meeting telecom minister Ravi Shankar Prasad.

He was replying to a query on the impact of the fee hike on the Indian IT companies.

Murthy further said, "These are issues that need to be discussed and I have no doubt at all that value of Indian IT services industry is so high to the US corporations that some of these issues will not come in the way of the growth of the Indian IT industry."

The US Congress has imposed a special fee of up to $4,500 on the H-1B and L-1 visas popular among Indian IT companies to fund a 9/11 healthcare act and biometric tracking system.

Prime Minister Narendra Modi on December 16 shared with US President Barack Obama the concerns of the Indian IT industry and professionals on the legislation, while it was under process, in the US Congress relating to popular H-1B and L-1 visas.

Congressional leaders, while agreeing on the $1.1 trillion spending bill, decided to impose a special fee of $4,000 on certain categories of H-1B and $4,500 on L-1 visa.

The money generated, expected to be more than a billion dollar per annum, would be used to fund a biometric entry and exit tracking system, in addition to funding health screenings and treatments for 9/11 first responders.

"I am a foreigner. As far as the US government is concerned, it is their right to take whatever decision they want in the best interest of the US," Murthy said.

He said that as a foreign entity, Indian IT companies can work harder, smarter and bring more innovation so that customers in the US will realise importance of value addition done by the Indian IT industry.

Murthy also praised Prasad for the initiatives taken by his ministry for the IT industry.

". . .looking at things that he has done in the last 15-16 months, I personally feel he is the finest IT and communications minister that we have," Murthy said.