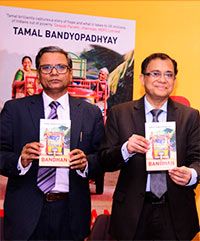 Kolkata’s creme de la creme turned up at the launch of Bandhan, The Making of a Bank, but the evening nevertheless had an informal touch typical of the young bank with CMD Chandra Shekhar Ghosh personally welcoming the dignitaries, reports Indrani Roy/Rediff.com. “But then I can never be as 'tall' as you. What you have achieved in life is far beyond anyone’s reach,” he added.

We were at a Kolkata hotel a few minutes away from the inauguration of Bandyopadhyay’s third book -- Bandhan, The Making of a Bank.

A Penguin Random House Publication, the book, as the author said in an interview to Rediff.com earlier, doesn’t depict Ghosh ‘as a messiah for the poor but as an astute entrepreneur who dared to venture into areas where India’s banking system never could’.

Though the creme de la creme of Kolkata was present, the  event nevertheless had an informal touch a la Bandhan style, with the affable Ghosh personally greeting the dignitaries along with Bandyopadhyay.

"It is an evening to celebrate the achievements of Ghosh," said Amit Mitra, finance minister of West Bengal, who unveiled the book while Harun Rashid Khan, deputy governor, Reserve Bank of India, was the guest of honour. Ashok Banerjee, professor at the Indian Institute of Management-Kolkata, anchored the event. 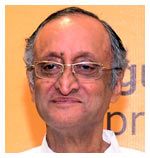 Amit Mitra: "There is no science to what Bandhan has achieved. It is complete passion. The book is a celebration of entrepreneurship."

The tone of the launch was aptly set by the chanting of a sloka from the Rig Veda followed by an interesting short film on the writer.

Then it was the West Bengal finance minister's turn to take the mike.

Mitra lauded Ghosh's efforts and called him "an entrepreneur with passion, a skilled businessman who had entrepreneurship as the collateral".

Seeing the Presidency University Vice Chancellor Anuradha Lohia among the audience, Amit Mitra said, "As an ex-student of Presidency, I request you, madam, to produce more Chandra Shekhar Ghoshs."

To this came the VC's witty riposte: "Why only that, we can also produce more finance ministers." 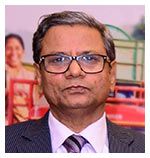 Tamal Bandyopadhyay: "Like my previous books, this too is a journalistic work. This is not a definitive biography of Bandhan founder and chief executive officer-cum-managing director Chandra Shekhar Ghosh -- this is a book on entrepreneurship and the transformation of a microfinance entity into a bank, seen from a ringside seat."

Explaining his motivation to pen the book, Tamal Bandyopadhyay said, "Bandhan's remarkable growth was an inspiration in itself.

"Like my other two books -- A Bank for the Buck and Sahara, The Untold Story -- here too I tried to tell a simple story, attempted to demystify the business of microfinance.

"All I wanted was to write a novel that would depict Bandhan's story in a simple and lucid manner.

"I told myself -- I have to write a book that every reader, including my wife and son, would understand."

RBI Deputy Governor H R Khan said he loves the city of Kolkata for its delicious cuisines but now the city is even more important to him for being the birthplace of Bandhan. 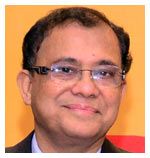 Harun Rashid Khan: "It is an exciting book. The author is known for high professional ethics and integrity. Bandhan has mastered the art of reducing poverty without compromising on profitability."

"Bandhan has mastered the art of reducing poverty without compromising on profitability.

"And Tamalda has done an excellent job of capturing its magic," he said.

Also read: Bandhan should not fall for corporate banking

Replying to speakers showering praises on him, the Bandhan founder said, "The credit goes to the team for living the dream that I dreamt.

"The team worked round the clock with love, grit and determination.

"Not me, it's the Bandhan team members who are the real heroes." 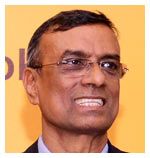 Chandra Shekhar Ghosh: "More than a book on Bandhan, this is a history of Indian financial system and its evolution. Every finance professional will benefit reading this book. I congratulate the author for understanding the true spirit behind Bandhan and making it an inspirational story."

In his foreword to the book, Kaushik Basu, chief economist, World Bank, wrote: 'Tamal Bandyopadhyay is a gifted story teller, who combines the sharp vision of a finance expert with the journalist's skill for observation and narration. . . Bandyopodhyay does not go into statistical methods, but his keen eye for detail captures some of the . . . ideas of modern behavioural finance in the form of tales and narratives, and, as such, this book is a wonderful complement to the more formal methods of research economists.'

Among those who have endorsed the book are UK Sinha, chairman, Securities and Exchange Board of India; Dr D Subbarao, former governor, RBI; Vinod Rai, former CAG; and Deepak Parekh, chairman, HDFC Ltd.

Towards the end of the programme, Mousumi Ghosh of the healthcare/education firm Team Future suggested that a film be made on Bandhan's success story. Judging by the thunderous applause it was met with, the audience simply loved the idea.