Billionaire Anil Agarwal-owned mining firm Vedanta Resources on Thursday said it is in talks to buy a stake in Cairn India, the company that owns the nation's largest onland oilfield. 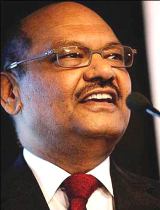 The London-listed firm said "discussions are taking place with Cairn Energy Plc regarding an acquisition of an interest in Cairn India Ltd, a company listed in India."

Cairn Energy, which holds a 62.37 per cent stake in Cairn India, also confirmed the discussions in an almost identical separate statement.

This is not the first time that talks of Cairn Energy selling a stake have emerged.

Over the past 2-3 years, the Edinburgh-based firm has been rumoured to have been in discussions with steel tycoon L N Mittal and Italy's Eni Spa, among others, for an outright sale of its interest in Cairn India, or at least the sale of an asset.

The stake sale talks have resurfaced just when the Mangala oilfield in Rajasthan, Cairn's most prolific asset, is nearing peak output of 125,000 barrels per day.

If it is successful, Vedanta -- which has iron ore, zinc and copper mines -- will be the second large miner in the world after BHP Billiton to have an interest in oil.

"Cairn emphasises that there can be no certainty the contemplated disposal will occur or as to the terms of any such disposal," Cairn Energy said.

"A further announcement will be made when appropriate." Cairn India shares closed with a 2.41 per cent gain at Rs 340.60 on the Bombay Stock Exchange on Thursday.

Cairn India was valued at $14 billion at the close of trade, making Cairn Energy's stake worth over $8.5 billion.

Sir Bill Gammell-run Cairn Energy can retain a controlling interest in Cairn India even it sells up to a 12 per cent participating interest for Rs 7,741 crore (Rs 77.41 billion) at Thursday's closing price.

The talks are in advanced stages and Vedanta may be discussing a range of options, including an equity stake, asset purchase or a complete takeover of Cairn India.

Cairn India currently produces about 110,000 bpd from the Mangala oilfield in Rajasthan and is expected to reach peak output of 125,000 bpd this month.

In addition, the Bhagyam field in the same block has the potential to produce 40,000 bpd and Aishwariya another 10,000 bpd.

The company owns a 70 per cent stake in the fields, while the rest is held by state-owned Oil and Natural Gas Corp. It also owns interest in Ravva oil and gas field off the East Coast and Block CB/OS-2 in the Cambay Offshore Basin.