US millionaire Wadhwani sets up India chair at CSIS 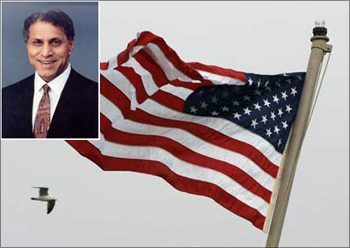 The chair, called the Wadhwani Chair in US-India Policy Studies -- which will be funded by the Wadhwani Foundation, founded by Wadhwani and his wife Kathleen Wadhwani--will replace the South Asia Program at CSIS, which was headed since its inception in 1998 by former veteran diplomat Teresita Schaffer, who has left CSIS to do some independent consulting.

Former US Democratic Senator Sam Nunn, who then chaired the powerful Senate Armed Services Committee and is now the chairman of the CSIS Board of Trustees, in expressing CSIS's gratitude to Wadhwani "for making this possible," said, "The newly established chair will pioneer policies that expand political and economic ties with India," and added: "As a close US-India relationship is in both countries' interest, the chair's work will be vitally important."

Echoing Nunn's sentiments, John Hamre, CSIS president and CEO, said, "The US-India relationship is one of America's most strategically important partnerships of the 21st century," and predicted, "Dr Wadhwani's generosity, and Karl Inderfurth's work as the Wadhwani Chair, will contribute to critical policymaking efforts to build a secure and sustainable future for the relationship."

Wadhwani, whose Symphony Technology Group, is a group of nine software and service companies with combined revenue of over $2.5 billion and 15,000 employees, in providing his rationale for setting up the India Chair at CSIS, where he serves on the Board of Trustees, said, "The importance of the strategic partnership between the US and India and the changing dynamic in both countries requires us to take policy thought leadership to the next level."

"The Wadhwani Chair at CSIS is intended to be the fulcrum for this and to develop creative new options for top policy makers in both countries to accelerate economic development," he said, and added: "We are delighted to have a person with the stature of Karl Inderfurth as the first holder of the Wadhwani Chair."

The CSIS said that the Wadhwani Chair would "serve as an independent platform in Washington from which to assess major policies and strategic issues in the relationship between India and the United States and place special emphasis on policies to accelerate economic development in India, with a wide-ranging agenda including economics, energy security, climate change, regional security and India's role in the world."

It said that "Ambassador Inderfurth will work closely with a partner chair holder at the Indian Council for Research on International Economic Relations in New Delhi to promote pragmatic policies conducive to India's economic growth and development, bringing together public and private sector representatives in both countries."

Inderfurth, who for the past 10 years since his tenure as the Clinton administration's point person for South Asia, has been a professor of international relations at George Washington Unviersity, pointing to the "remarkable transformation in US-India relations," in the past decade, declared, "I believe the Wadhwani Chair will build on this solid foundation and serve as a key player and catalytic agent for unlocking the full potential of the US-India relationship in the years to come."

He was also a journalist in a previous avatar, from 1981 to 1991 when he worked as a national security and Moscow correspondent for ABC News and received an Emmy award in 1983.

From Moscow, he broadcast more than 400 reports from 12 of the then 15 Soviet republics. Before joining ABC News, he served on the staffs of the Senate Intelligence and Foreign Relations Committees and the National Security Council.

Inderfurth is an alumnus of the University of North Carolina at Chapel Hill and Princeton University from where he received a BA and a MA respectively in political science.

He was a Fulbright scholar at the University of Strathclyde in Scotland.

He is a member of the Council on Foreign Relations, the International Institute for Strategic Studies, and the Fulbright Association and serves on the Board of Trustees of the Asia Foundation and along with Loch J Johnson, edited Fateful Decisions: Inside the National Security Council, which was published by the Oxford University Press in 2004.

Meanwhile, Schaffer said, "I leave with pride in what we've accomplished over the past 12 years, and with great regard for the people I've worked with both at CSIS and in the larger community of South Asia watchers," and noted that some of her consulting work would be for McLarty Associates, headed by former White House Chief of Staff in the Clinton administration, Thomas F 'Mack' McLarty and former Deputy Secretary of State and ex Director of National Intelligence, John Negroponte, which has a large India practice, even as she "remains involved in policy work and analysis on India, Pakistan and the rest of the region."