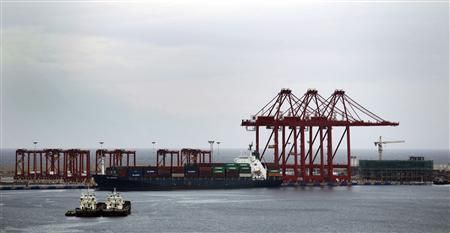 Sri Lanka's suspension of a project to build a glittering skyline on land reclaimed from the Indian Ocean has prompted China to defend its investment, in a test of Beijing's ambitions to fund loans and major infrastructure ventures abroad.

Recently elected President Maithripala Sirisena has vowed to look again at deals between China and his predecessor Mahinda Rajapaksa, saying they were not transparent, while India has eyed China's involvement in Sri Lanka with increasing alarm.

"Such a port city . . . will be of great significance for Sri Lanka's economic development, attracting foreign investment and promoting local tourism," he told a small group of reporters earlier this week.

His comments came days after Sri Lanka halted the $1.4-billion port project, citing lack of government approvals and raising the risk of a diplomatic row with its biggest investor.

Yi also spoke in the week Colombo welcomes Narendra Modi, the first Indian prime minister to visit in 28 years as part of a drive to rebuild ties with smaller neighbours and counter China's rising influence in the Indian Ocean.

Two Chinese officials, who were not authorised to speak to the Press, said companies were unlikely to back down significantly if Sri Lanka demanded fresh terms.

"If the Chinese firm changes the commercial agreement here because of government pressure, it will have to allow reviews of all its projects in other countries as well," said one Chinese official familiar with the port city dispute.

China has invested millions of dollars in Sri Lankan infrastructure since the end of a 26-year civil war in 2009, when Colombo was largely shunned by Western investors because of its human rights record.

As well as the port, Sirisena's administration wants to renegotiate terms of an estimated $5 billion in Chinese loans, a move that could embolden other countries where China's state-backed firms have invested heavily.

One of them related to the construction of Hambantota port in the south in which a $306 million loan was secured from China's Ex-Im Bank at a fixed interest rate of 6.3 per cent.

Yi said loan terms for Sri Lanka were reasonable and in line with those China extended to other countries, adding that financing was made available against the backdrop of the 2008 financial crisis.

"At the request of the Sri Lankan government, China overcame the difficulties and increased financial support following the principle of mutual benefit."

Under the port plan, 108 hectares of land next to the main commercial port of Colombo would be taken over by China Communications Construction Co Ltd, including 20 hectares on an outright basis and the rest on a 99-year lease.

The development would include shopping malls, water sports, golf, hotels, apartments and marinas.

Construction began last year with scores of trucks dumping rocks each day into the ocean to create the landfill near the popular Galle Face Green.

Work has stopped since Friday, with the government asking the Chinese firm to show approval documents including environmental clearance.

The company issued a statement saying it would provide the government with requested paperwork, and said separately it was losing hundreds of thousands of dollars a day due to the suspension.

China hoped Sri Lanka would take a positive decision before the planned visit of Sirisena to Beijing later this month, one of the unnamed Chinese officials said.

"The decision is not only affecting the project. This also signals the attitude of the new government towards foreign direct investors," said the official.

India, racing to catch up with China in infrastructure development on the Indian Ocean island, is worried about the security threat posed by Chinese ownership of land, aggravated by the docking of Chinese submarines in Colombo last year.

Sukh Deo Muni, former Indian ambassador to Laos and an expert on India's neighbourhood policy, said he did not expect Sri Lanka to renege completely on Chinese deals.

"It may . . . be recast taking out the 20 hectare freehold space to be given to the Chinese, and may be the loan terms could be eased," he said.

New Delhi hopes a review of China's involvement in Sri Lanka, which lies near vital shipping lanes, will help it retrieve lost ground in a country where it traditionally holds sway.

Modi will spend two days there, travelling to the Tamil-dominated north and the centre of the separatist war.

At the top of Modi's agenda is a deal to construct a 500-megawatt thermal power plant near Trincomalee, a strategic port in eastern Sri Lanka that was cleared in 2012 but is stuck for lack of environmental approval.

© Copyright 2020 Reuters Limited. All rights reserved. Republication or redistribution of Reuters content, including by framing or similar means, is expressly prohibited without the prior written consent of Reuters. Reuters shall not be liable for any errors or delays in the content, or for any actions taken in reliance thereon.
Related News: Sri Lanka, China Communications Construction Co Ltd, Colombo South Harbor, Narendra Modi, Indian Ocean
SHARE THIS STORY
Print this article