Vagela could not have reached this position if Narendra Modi, who’d known him from his chief minister days, had not backed the choice. If there were awards for popularity, it is unlikely P D Vaghela would get one.

The 1986 batch IAS officer from Gujarat, who has just been named chairman of the Telecom Regulatory Authority of India (TRAI), is not in the business of winning friends and influencing people.

“He is a totally straight guy, not diplomatic at all and one who knows his job.

"He is always fighting for the little people and is a dedicated Ambedkar-ite,” says a course mate.

Local journalists - the first responders in any crisis - agree only partly.

“He is a down-to-earth person, a Dalit from north Gujarat.

"He was totally different from other IAS officers - his doors were always open to us and he would discuss tax and GST implementation problems with us quite freely.

Vaghela was collector in Banaskantha and Kheda.

He was also municipal commissioner in Jamnagar and MD of Gujarat Tourism. During the United Progressive Alliance (UPA) regime, he was chairman of the Kandla Port Trust.

His thesis was on the impact of the Tribal Sub-Plan schemes on the tribal communities of the Dangs.

But his biggest break came when he returned to the state and was made commissioner (commercial taxes) in 2016.

He could not have reached this position if Narendra Modi, who’d known him from his chief minister days, had not backed the choice.

Those were the years of exiting from excise and VAT (which, too, Vaghela had a role in superintending in the state) and entering the GST regime.

There was fear, confusion and uncertainty on account of the transition.

A Gujarat-based company, for instance, got a scrutiny notice for a 14-paise mismatch.

Vaghela’s academic qualifications - BCom in accountancy and an MBA in finance - helped him counselling patience and explaining to traders the upside of GST: No more visits from excise department officials, threats or bribes.

More than that, it was his calmness and thorough understanding of the system that saw Gujarat topping the generation of e-way bills with 15 to 20 per cent share in the country in 2018 even though Gujarat’s revenues from GST went down 13 per cent relative to VAT.

Of course, it is another matter that the same year, a bogus e-way bill scam was also unearthed in Gujarat running into around Rs 100 crore.

Around this time Vaghela caught the attention of P K Mishra, now the PM’s principal secretary.

He was sent to Delhi as secretary in the pharmaceuticals department where he did extensive work on the costing of medical devices and medicines - a subject very close to the heart of the ruling dispensation.

Vaghela was due to retire on September 30. On September 28, he was appointed chairman of Trai, one of the more sought-after positions by superannuating civil servants.

He will serve till he is 65: which means an unbroken five-year stint to fix things that are badly broken in the telecom and broadcasting space.

“Trai is faced with many challenges today: court judgments, a crisis of credibility and a serious financial mess in industry. A lot now depends on what the new TRAI chairman does.

"The first most important thing is to restore the credibility of TRAI as a regulatory institution - and this must be done in the next six months.

"If the new chairman is also going to do everything at the whims and fancies of somebody else and allow regulatory capture, then whether it is Vaghela or anyone else in that position really doesn’t make a difference” says Rahul Khullar, former Trai chairman, known for speaking his mind.

Khullar says the finances of the telecom sector are in such a mess that there is little possibility of holding auctions for 5G spectrum in 2021, maybe not even 2022.

But it is the government that will decide the timing.

The regulator has to assess the state of the industry and tell the government what it needs to do to get 5G going.

This is hamstrung by other problems.

Telecom technology has high levels of obsolescence: so those who are going to bid for 5G will have to see if the game is worth the candle, given that all the players are still paying back court-mandated dues and will have to rejig systems if they are to acquire 5G spectrum.

Then there’s the question of whether ordinary Indians will be able to afford 5G after the cost for new hardware has been factored in.

In some ways, it is Vaghela who will have to decide whether all Indians should drink Blue Label (even if they are ruined in doing so); or they should be content with Blender’s Pride, which takes you to the same destination but through a road less smooth.

There are also a plethora of issues in broadcasting, even more complex than telecom.

Vaghela can be sure of being busy over the next five years.

But industry players who speak his language should not make the mistake of thinking he’s a pushover. 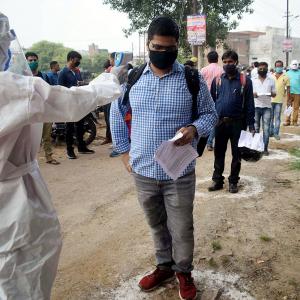