Trade unions up in arms against Pay Panel report 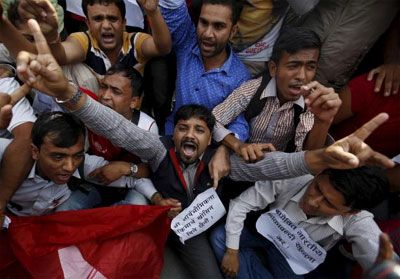 Joining ranks against the 7th Pay Commission recommendations, national trade unions linked to BJP and the Left today said the proposed hike was lowest in many decades and were not in sync with inflation.

"It is disappointing and we oppose it strongly. There is just 16 per cent hike in net pay against projected 23.55 per cent. Besides, there is a huge gap in maximum and minimum pay," RSS affiliate Bhartiya Mazdoor Sangh's General Secretary Viresh Upadhyay said.

Another point to note is that the gratuity ceiling has been raised from Rs 10 lakh (Rs 1 million) to Rs 20 lakh (Rs 2 million), the benefit of this will go to senior officials, he added.

He added the commission has ignored sharp increase in prices justifying substantial upward revision in HRA and other allowances.

"Instead the commission has reduced rates of HRA from 30 per cent to 24 per cent of the basic pay in A Class cities and corresponding decrease in other cities which is a retrograde recommendations," he said.

The 900-page report of the 7th Pay Commission headed by Justice A K Mathur was presented to Finance Minister Arun Jaitley yesterday with a recommendation that the new scales be implemented from January 1.

The panel recommended a 14.27 per cent increase in basic pay, the lowest in 70 years. The previous 6th Pay Commission had recommended a 20 per cent hike, which the government doubled while implementing it in 2008.

CPI-M linked Centre of Indian Trade Unions's (CITU) President A K Padmanabhan said these recommendations are an "injustice" to workers. The minimum pay is not in sync with today's inflation and prices.

"Then we have doubts of the way they have calculated the figures. For example, they calculated House Rent Allowance (HRA) at 3 per cent against the mandated 7 per cent.

Padmanabhan added: "Also we have referred to commodity prices on agriculture ministry's website and on the basis of Labour Bureau data, the Basic Pay comes at Rs 11,341 while their calculation shows it at Rs 9,218. So there is a lot of gap, which is wrong."

Then there is no clarity on the pay revision for lakhs of contract workers in government ministries as well as 3 lakh Grameen Dak Sewaks, he added.

"It is the only commission, which has reduced the allowances and due to which the growth in net income is only 14.28 per cent," he added.

Kutty said the employees and workers will meet on November 27 to protest against the recommendations and discuss the issue.