News
Business
Movies
Sports
Cricket
Get Ahead
Money Tips
Shopping
Sign in  |  Create a Rediffmail account
Rediff.com  » Business » The Jaguar F-Type is in a league of its own

The Jaguar F-Type is in a league of its own I was halfway across the Bandra-Worli Sea Link, driving the Jaguar past a Maruti Suzuki S-Cross, when I noticed a group of excited schoolchildren standing by their school bus and frantically waving to get my attention.

As I punch the accelerator and cruise past the school bus, which coincidentally is also made by Tata Motors, the company that makes the F-Type, I lip-read what one little boy is saying. "Tata Jaguar, Tata Jaguar," he voices as he gives me a thumbs up.

The S-Cross, meanwhile, is left a mile behind me. The message from the youth of our generation appears to be this: we prefer a foreign brand owned by an Indian company as opposed to an Indian brand that's owned and run by a foreign one. It's been 10 years since Tata Motors picked up the storied automotive racing brand from England that Ford once owned and embarked on the journey to bring it back up to speed.

My first stop is the luxury hotel Sofitel, where the Jaguar is given the best parking spot in front of the entrance. Later, at the Mahalaxmi Race Course, the valet keeps a shaded spot by the tree near the entrance for it without me having to ask for it.

And the parking attendants at the Four Seasons Hotel smile, I suspect in part because they compare notes on the pros and cons of sports cars that come there.

The F-Type is the kind of vehicle that is geared to take on the likes of the Porsche Boxster, and perhaps also some of the smaller sports cars like the German BMW M-3, the Mercedes-AMG C 63 and the Audi S4. The moment you sit in the car and feel its firm, contoured seat wrap around you, you know this is a vehicle meant for sports and not grocery shopping.

That, however, doesn't mean it can't be driven every day.

The simple, leather-wrapped interiors are sporty and resemble a cockpit. While the steering console has classic mounted controls and mechanically activated popup aircon vents, I did miss the Jaguar "handshake" -- a gimmicky but entertaining feature that was present in the Jaguar XF R.

This is a charming technological innovation that makes the gear selector pop out as soon as you turn the car on -- like a handshake.

Now, some sports cars purr and some whine. The F-type growls -- when pushed beyond a medium rev. It's a rich, throaty sound that no petrol-head can resist.

While the F-Type is a smaller version of the original 540 hp, V-8 sibling, for city driving you wouldn't miss that much power.

Unlike some sports cars, the F-Type has a steering wheel that is neither like greased lightning nor is it soft and spongy with little or no feedback. It feels centred on balance and is never out of control or on the verge of biting back, which is not something that can be said of all two-door sports cars. The other surprise is that unlike most fast, exotic cars that give ridiculously low fuel averages (in single digits), the Jaguar's fuel tank hardly seemed to dip even after running a few rounds of the city. That's thanks to the inclusion of aluminium in the car.

While compact and designed for a purist, there are bits that can be improved. For one, the boot space is scant when you consider that the luggage will have to share space with a rather large 19-inch spare tyre.

And, even if you throw in a small sports bag at the back, the view from the rear window gets obstructed. While this is a sports car and one shouldn't expect to make airport trips with the chauffeur and the luggage in it, it would have been nice to have had that option.

On drive, the car zooms to well past 100 kmph effortlessly. And, it is easy to handle even in tight corners on roads that have lunar-sized craters. The trick is to go a little slow.

The F-Type is Porsche's straight competitor and on most counts, such as everyday usability, price range and style quotient, it delivers a packed punch. It also has other nifty little tricks up its sleeve. Like, the tail spoiler can be deployed manually or gets activated when you cruise past 120 kmph. That adds fun to the ride.

Aficionados may lament that this isn't a sports car in the league of Italian and German counterparts such as the Ferraris and the Lamborghinis.

Well, they are not wrong to think so. But the Jaguar F-type is in a league of its own -- both in looks and performance.

It is quick enough to push through when you want it to, but not absurdly fast or with a monstrous engine that costs a bomb and is a fuel guzzler.

And that's something to say. 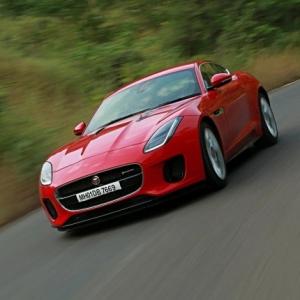