Sibal under attack in cyberspace 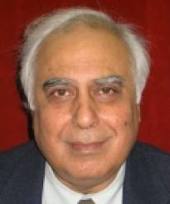 Telecom Minister Kapil Sibal on Wednesday came under a fresh wave of attack on government's move to monitor content on social networking sites with more netizens reacting strongly to it.

Noted personalities like member of Parliament Rajeev Chandrashekhar, Shobhaa De and Shekhar Kapur joined others in expressing their displeasure over Sibal's statement on Tuesday on moves to eliminate offensive content from Internet platforms.

They said the government cannot be a censor of thought and freedom of expression cannot be curbed.

Hashtags #Kapilsibal and #Censorship were the hot trending topics on Twitter.

Member of Parliament Rajeev Chandrasekhar said on popular micro-blogging site Twitter, 'Can u imagine some bureaucrat in Dept of Telecom being tasked with approving content on internet, of deciding appropriate n inappropriate.'

'This happens when you make a lawyer an IT Minister.

Prominent filmmaker Shekhar Kapur agreed. He said in his tweet, 'Every individual is a potential broadcaster n influencer on social media. that scares d gatekeepers of d world including govts.'

Author and socialite Shobhaa De tweeted 'Sibal saab, such outrage 2 protect privacy of one madam in a country of 100 million Internet users? We like our freedom and we shall have it!'

Filmmaker Kunal Kohli also felt the move would curb the freedom of speech.

'India is the greatest democracy. Kapil Sibal wants to curb this freedom of speech/expression, it won't and cannot happen. Wake up know your people,' he tweeted.

On Tuesday, addressing a press conference, Sibal had asked leading Internet companies like Google, Facebook, Microsoft and Yahoo! to screen derogatory, defamatory and inflammatory content about political leaders and religion.

Even on search engine giant Google, Sibal, now remains at the top spot as the most searched topic online in India.

For a nation with more than 100 million Internet users, and social networking site Facebook alone has over 30 million users, the move seems to have irked the netizens at large.

However, Sibal also has supporters in the cyberworld. Colleague and Minister of State for Communications and IT Milind Deora tweeted, 'Govt doesn't want censorship of the Internet.

But just as principle of free speech is sacrosanct, incendiary content must also be avoided.'

Congress member of the Parliament from Kerala Shashi Tharoor, a regular on Twitter micro-blogging site, said: 'Spoke to Kapil Sibal.

'He assured me he opposes political censorship. Concern is communally inflammatory images & language which he described. Have to say I support Kapil Sibal on the examples he gave me: deeply offensive material about religions & communities that could incite riots.'