Should you worry about the new face recognition system at airports?

Organisations like the Internet Freedom Foundation and many other activists have slammed the project stating that the system could be misused in a country where there is no data protection or privacy laws. 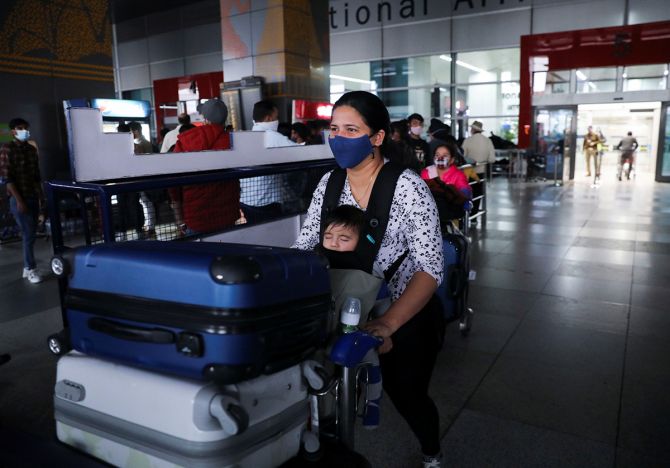 The facial recognition technology deployed by the Delhi police to track perpetrators of the 2020 riots and the April 2022 violence at Jahangirpuri in Delhi is all set to be deployed at the Delhi and Bengaluru airports.

Instead of Delhi police headquarters, the action will shift to server rooms at these airports, which will grant access to passengers without flashing their identity cards at multiple entry points.

Unlike the police, which forced alleged perpetrators to recreate their poses caught on CCTV cameras, the airport facial recognition systems would use superior technology that identifies the passenger in less than a second by matching physical attributes like their jawline, shape of the eyes and nose, size of the chin, among others, to grant "seamless" access to airports.

Envisioned as DigiYatra in 2018, the system involves the installation of biometric face recognition systems at various airports across India.

These systems would scan the face of passengers obviating the need for a printed boarding pass and furnishing of identity documents to security personnel.

The passenger has to download the DigiYatra application, create a profile by entering basic details and uploading their identity documents like a driving licence or the Aadhaar number.

Anyone using this for the first time will have to register themselves at the airport, following which their profile and biometric details will be added to the airport's database.

For every journey thereafter, the passenger will have to scan their boarding pass for verifying their DigiYatra identity.

From here, all entry points, except manual frisking at security checks before boarding, will be through face recognition that would scan a face and open the gate automatically without manual checking of either the boarding pass or an identity card.

Who is behind it?

Incorporated in 2018, the DigiYatra Foundation (DYF) serves as the nodal agency for the system's implementation.

It is not a body under the ministry of civil aviation.

It was incorporated as a not-for-profit company to develop what is called the DigiYatra Central Ecosystem -- an all-encompassing term for the entire face recognition infrastructure being rolled out across various airports.

The Airports Authority of India (AAI) owns 24 per cent of the shares in DYF.

While GMR operates the Delhi and Hyderabad airports, Mumbai, Bengaluru and Cochin are operated by Adani, Fairfax, and the Kerala state government, respectively.

What kind of data can DYF collect?

The DYF, consisting of various private operators, can collect vast amounts of personal and business data from passengers using its platform.

According to its privacy statement, DYF can collect and share data like identity card number, employment history, professional qualifications, job positions, the images or videos generated while using the platform, telephone number, name and other biometric data with third parties.

This data can be shared with "entities within DYF, agents in relation to their programs including marketing and sales."

DYF does not guarantee that it will not access unsolicited information from passengers like information contained in their personal emails and public posts.

However, it has to abide by rules that mandate that passenger data cannot be stored in airport servers or DYF's database 24 hours after the culmination of a person's travel.

However, the possibility of using the data within 24 hours for various purposes remains a grey zone.

The contract was signed in 2018 in Lisbon in a ceremony attended by top BIAL officials and even the Portuguese PM Antonio Costa.

Meanwhile, Japan's NEC Corporation has bagged contracts for other airports including Vijayawada, Varanasi, Kolkata and Pune.

In 2021, the NITI Aayog had conducted a challenge for start-ups to be involved in setting up facial recognition systems at airports under the DigiYatra policy.

Jeff Bezos-owned Amazon Web Services (AWS) was one of the organisers of the NITI Aayog event.

The ministry of civil aviation has claimed that each passenger would need less than three seconds at every touch point, except the physical security check before boarding.

At the moment, there are at least four touch points, except the physical frisking bay, where passengers have to show either their boarding pass or their identities or both.

The first is to Central Industrial Security Force (CISF) personnel stationed at the entry gate, who use human faculties to verify the name on the boarding pass and the face of the passenger with the one on the ID proof.

This usually takes up to 30 seconds and in some cases more, depending on the security person's dexterity and the passenger's alacrity.

The face recognition system is expected to prevent queuing up of passengers and, thereby, speed up the entry process.

The second touch point is usually before the physical frisking (some airports have replaced them with infra-red scanners that read barcodes on the boarding pass) where CISF personnel again check the boarding pass.

A facial recognition system is not expected to reduce queues at this waypoint, because the subsequent physical security checks will still be done manually.

The third touch point comes before boarding, where airline staff manning the boarding gate scan the boarding pass to let passengers through.

The final touch point is usually before entering the plane, where airline staff either physically tear a counterfoil from the boarding pass or scan it to let the passenger inside the aircraft.

Face recognition systems at these points too are expected to quicken boarding times, help airlines improve their time performance and facilitate greater efficiency within airports.

Organisations like the Internet Freedom Foundation and many other activists have slammed the DigiYatra project stating that the system could be misused in a country where there is no data protection or privacy laws.

Since India doesn't have a privacy law, any misuse of personal information to suppress individual freedoms would leave Indians with little legal recourse.

In a petition addressed to Prime Minister Narendra Modi, the foundation said, "The usage of facial recognition technology is creeping into every facet of our lives.

"New projects, which use facial recognition technology, are being developed and deployed by the central and state governments across the country right now.

"Facial recognition technology is causing certain harm by restricting the liberty and autonomy of millions of Indians."

Airports across the US and many other developed nations use facial recognition systems for security purposes.